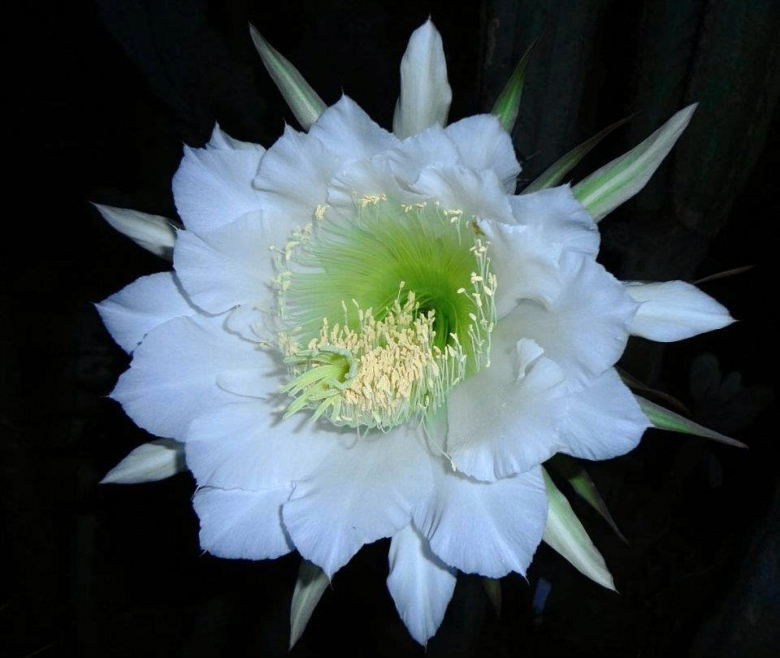 Harrisia pomanensis subs. bonplandii Photo by: Alexander Arzberger
Harrisia bonplandii has white nocturnal flowers and flowers easily. The flowers are large (up to 22 cm long), and close soon after sunrise.

Origin and Habitat: Harrisia pomanensis subs. bonplandii grows in the Gran Chaco (Paraguay, north of Argentina, Bolivia, and southwest of Brazil).
Habitat and ecology: Harrisia pomanensis subs. bonplandii is present in the understory at edges of dry forests, or associated with tropical plants. This terrestrial night-blooming cactus has escaped from cultivation and become naturalized in dry secondary thicket in many tropical countries.

Description: The Midnight Lady (Harrisia pomanensis subs. bonplandii), is generally included within (as a synonym of) Harrisia pomanensis, suggesting that there is not really a fundamental difference between the two and there remains a considerable confusion surrounding the true identity of this this plant. Up to 22 cm in length, the flowers are white with scales of the perianth-tube copiously woolly in the axils. The plant remains often unnoticed in the forest, but can not be overseen when it blossoms only in the night and where its Spanish name, Reina de la Noche (Queen of the Night) originates. This species is widely cultivated, but under different names, one of which is Cereus acutangulus. Fruits and roots are edible and well known to the native nations of the Gran Chaco.
Derivation of specific name. The name bonplandii honors the French scientific Aimé Bonpland.
Stems: Slender and weak, some erect or clambering and reaching 1–1.5 m, the other procumbent, arching or trailing on the ground up to 2.5-3 meters long, or, 3 to 8 cm in diameter, strongly (3-)4-angled. The margins are sharp and wavy.
Areoles: 2 cm apart.
Spines: 4-6 (or rarely more), acicular, the longest 0.5–2(-4) cm long, when young red and often black-tipped, in age grey. The single strong central spine (if present) is up to 2.5-3 centimetres long.
Flowers: White, nocturnal, funnelform,15 to 22(-25) cm long, closing soon after sunrise. Outer perianth segments green, pink-tipped. Pericarpel and corolla tube filled with large persistent scales copiously woolly in the axils. Filaments numerous, borne almost to the base of the tube. Style included; stigma-lobes numerous.
Fruit: Edible, globular, and strongly tuberculate, 4 to 6 cm in diameter, red, bearing large scales with hairs in their axils, spineless, splitting on the side and exposing the white flesh and black seeds.
Similar species: Harrisia bonplandii differs from Harrisia martinii by its areoles with 4–6 (not 1–3), much longer radial spines 5–20 mm long, and scales of the perianth tube woolly in the axils.
Note: It has been argued that this name should be rejected in favour of Harrisia balansae, but no formal proposal has been has been made, Hunt & al. (2006). Leuenberger (2001) wrote a detailed history of the name and recommended to maintain the use of H. bonplandii. Its modern application appears to be consistent and widely accepted.

Subspecies, varieties, forms and cultivars of plants belonging to the Harrisia pomanensis group

Notes: The widely grown Harrisia jusbertii is considered by some to possibly be a natural intergenic hybrid betwee Harrisia pomanensis, and Echinopsis eyriesii rather than a pure species. 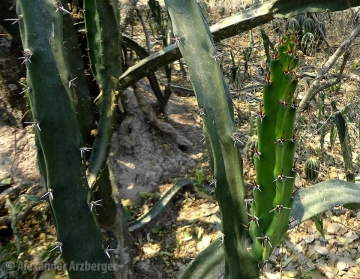 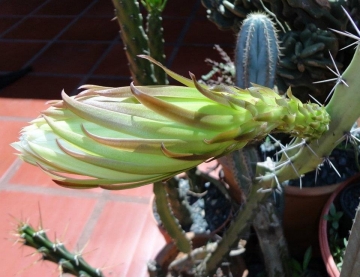 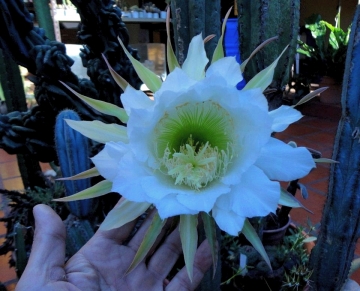 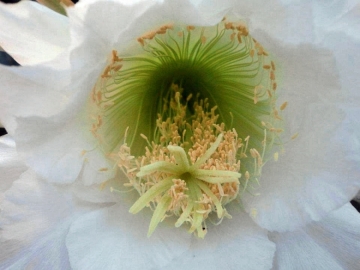 Cultivation and Propagation: Harrisia pomanensis subs. bonplandii (Harrisia bonplandii) presents no problems in cultivation and will do well in a sunny spot in a cactus house.
Soil: Grow them in rich, porous, sandy soil and let their soil dry out between waterings. If potted, repot in the spring if their roots become cramped. Generally, they should be repotted every other year in order to provide fresh soil. However, this doesn't necessarily mean they'll need larger containers. Fill about a quarter of the pot with broken crocks, gravel, etc. to promote good drainage. After repotting, do not water for a week or more.
Hardiness: These plants will not tolerate extended periods of frost; they can survive to a minimum temperature of -4°C.
Traditional uses: Fruits and roots are edible and well known to the native nations of the Gran Chaco. The fresh mature fruits and the boiled flowers are edible. The Maka natives also ate boiled or roasted roots. The Maka use the thorns to make tatoos.
Propagation: It can be increased by seeds or cuttings. Cuttings of healthy shoots can be taken in the spring and summer, Cut the stem with a sharp, sterile knife just above a bud or shoot (a 7-10cm long tip or branch is most suitable for propagation) Leave the cutting in a warm, dry place for a week or weeks (depending on how thick the cutting is) until a callus forms over the wound. Once the callus forms, the cutting may be inserted into a container filled with firmed cactus potting mix topped with a surface layer of coarse grit. They should be placed in the coarse grit only; this prevents the cut end from becoming too wet and allows the roots to penetrate the rich compost underneath. The cuttings should root in 2 to 6 weeks.
Garden uses: This species forms long columns that are great for grafting valuable species of cacti and - differently from other common grafting stock - don’t induces plants to elongate out of character and produce weak spination. The scions on Harrisia don’t grow as fast as the ones grafted on other tender and stronger stock, but they prosper very easy and can be kept in dark and cold places in winter. It can easily endure some light frost, too.