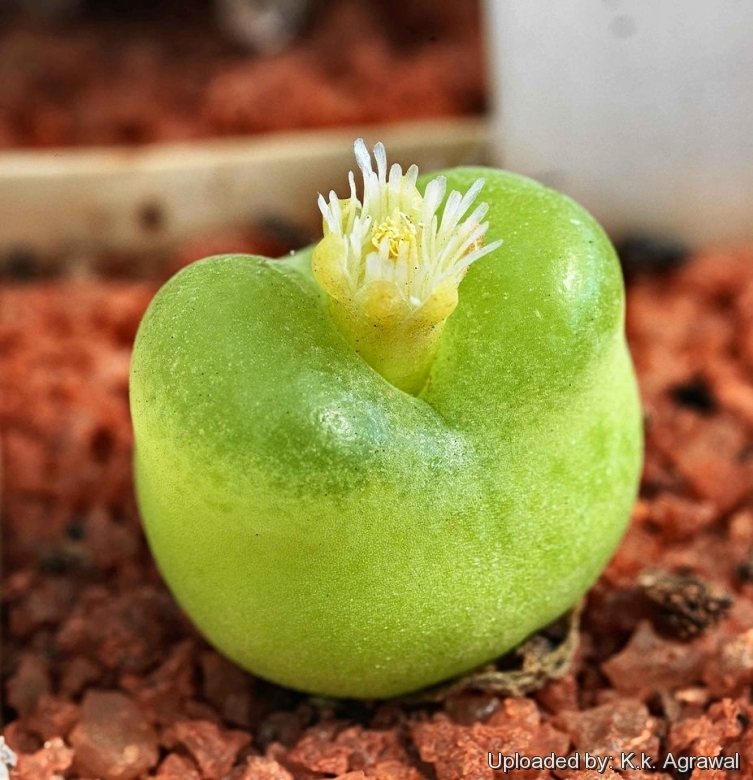 Origin and Habitat: Conophytum maughanii subsp. latum is endemic to the Namaqualand, Northern Cape (South-eastern Richtersveld between Eksteenfontein and Umdaus), in the Republic of South Africa (Extent of occurrence 681 km²). It is widespread with scattered individuals, and sometimes locally common.
Habitat and Ecology: This species grows on quartz flats in the Succulent Karoo in various types of succulent shrubland. There are no severe threats to the taxon, although some small subpopulations may be damaged by road tracks and localised mineral exploration diggings. It is however unlikely to be causing a significant overall decline to the population.

Subspecies, varieties, forms and cultivars of plants belonging to the Conophytum maughanii group

Notes: Most plants turn an intense saturated red in late winter as dormancy approaches, but in many populations some plants are always red; these match Tischer's Ophthalmophyllum latum var. rubrum which hence does not justify the separation as a variety (Hartmann 2012).

Cultivation and Propagation: They are relatively difficult to grow. These plants grow on winter rain and head for summer dormancy. The growing season in northern hemisphere is from September to March. During this period they present their red flowers and can be lightly watered about once a week or (better) misted every day and will become plump. In Africa, the mist from morning fog provides moisture. Otherwise their epidermis breaks (resulting in unsightly scars). Water minimally in summer, (only occasional misting). Start watering again in autum after the previous year's leaves have dried up. Require good drainage. They enjoy full sun or half-shade and in summer they need to be kept in a cool area. Hardy to -2°C. Ensure a very good ventilation. Avoid to repot frequently. They may stay in the same pot for many years. Plants grown in larger containers have frequently relatively poor flowers. They might improve when the plants are given their own, small individual pots.
Propagation: They can be reproduced by seeds.