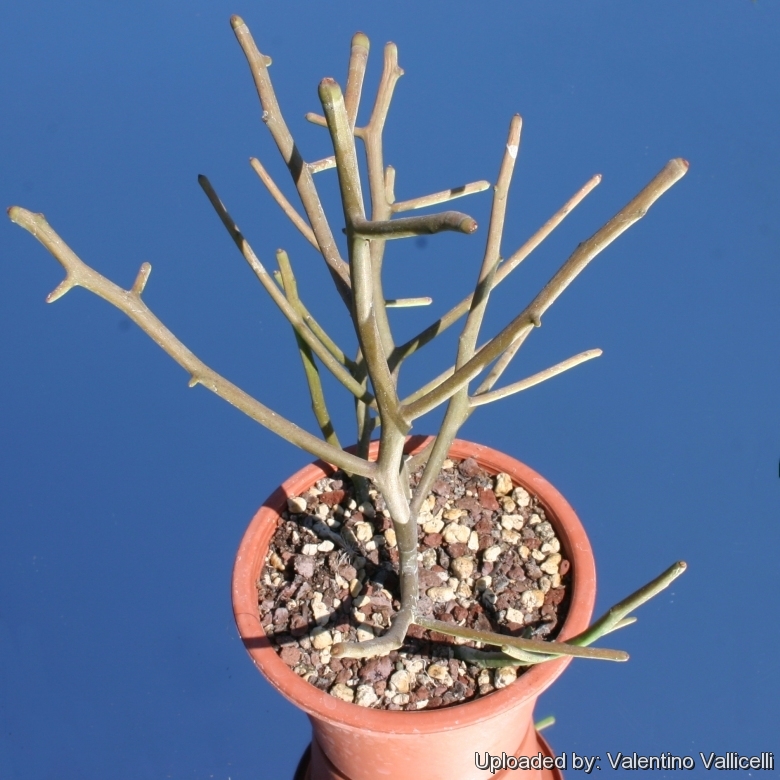 Origin and Habitat: Madagascar, South-west Madagascar, Tulear (extending east to Mahaboboka) to Fort-dauphin. This species has a large extent of occurrence (20,326.9 km²) and a large area of occupancy (11,910.9 km²). Recorded from 16 localities and comprises three to six subpopulations. This species is common throughout its range.
Habitat: Spiny forest on arid regions, where it is almost extinct due to over-exploitation for rubber collection. Other threats are habitat degradation, fire, habitat clearing for charcoal. E. mainty is also eaten by cattle.

Description: Euphorbia mainty is a small leafless succulent ranging from many-branched shrubs to large trees up to 6 m tall (but usually less) the brush-like masses are the best known feature of this species. It is similar to Euphorbia tirucally but it will always maintain more intricate, more intensely intersticed stems and stemlets.
Stems: Grows with single or multiple trunks which support a tangle of pencil thick, cylindrical succulent branches, that are smooth and glabrous dark brownish-green, 5-8 mm in diameter. This plant is characterized by sympodial growth, that is the terminal bud of each twig abruptly dies and the growth is continued by lateral buds, season after season.
Spines: Plants are without spines.
Leaves: The leaves are small and slender, rarely seen, as they fall very early.
Roots: With small holes where the plant store the water allowing the intisy tree to survive to severe drought.
Flowers: Flowers are axillary in sub-apical position. The true flowers, which are centred within the bracts, are inconspicuous. 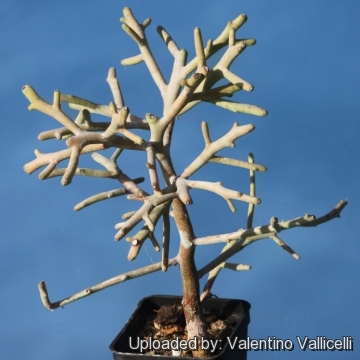 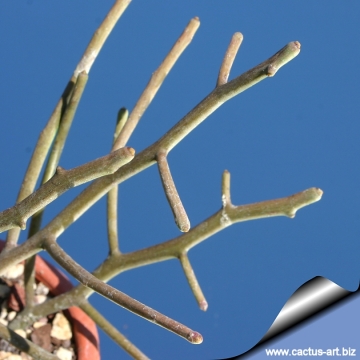 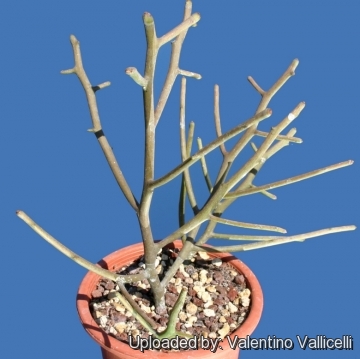 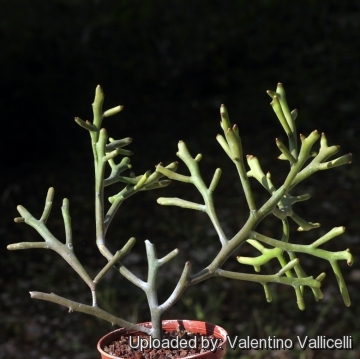 Cultivation and Propagation: It is an easy species to grow that is suited for any well drained soil in full sun. But young plant are happy growing indoors, where they can easily reach the ceiling. Give the plant an airy growing medium which mainly consists of non organic material such us clay, pumice, lava grit, and only a little peat or leaf-mould. Water regularly during the active growing season from March to September. No water should ever be allowed to stand around the roots. Keep almost completely dry in winter. It is a moderately fast grower, and will quickly become large landscape masterpieces in just 3-5 years. Only downside is from strong winds, the columns often smash into each other, causing permanent scarring... best to plant in such a location where winds are not a big issue. If plant becomes very red, this is a sign that the roots have not developed properly. It is a relatively fast growing and long lived plant and once established, it will be content in its position and with its soil for years. It can tolerate moderate shade, and a plant that has been growing in shade should be slowly hardened off before placing it in full sun as the plant will be severely scorched if moved too suddenly from shade into sun. Like quite small pots, repott in very later winter, early spring. Can be pruned for shape and branching. Frost tender, frost free zones only. Plant Pests: Prone to mealy bugs and rarely scale.
Propagation: It is easy to propagate by cuttings in late spring to summer, just take a cutting of the plant let it dry for 1 and stuff it in the ground (preferably dry, loose, extremely well draining soil).
Warning: All parts of Euphorbia intisy ooze a milky sap when damaged or cut. Contact with this sap may cause dermatitis in some people, and in the eyes the sap can cause temporary blindness which may last for several days.
Uses: The. "intisy" part is one of the names by which it is known among the natives; This shrub contains latex that has had considerable use locally. The rubber (similar to caoutchouc ) coagulates on the surface of the plant in long elastic strands and is of high grade.