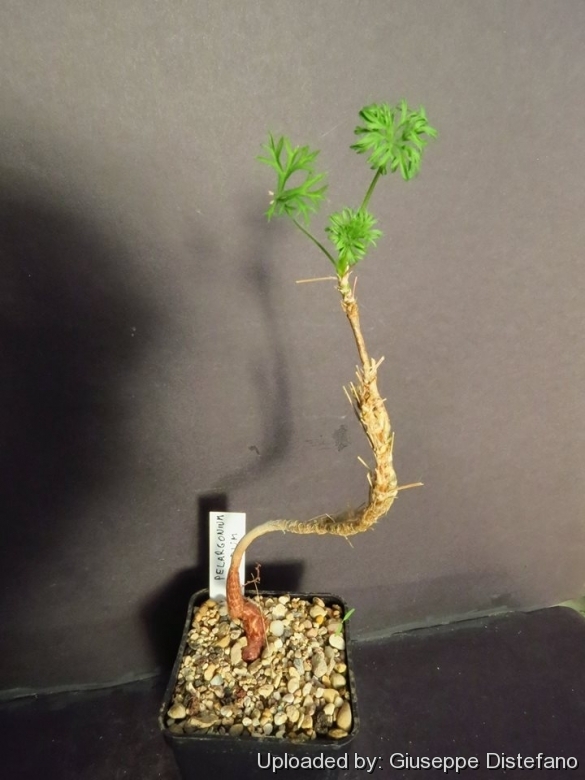 Origin and Habitat: Pelargonium aridum comes from an area encompassing the border of the Western and Eastern Cape Provinces, and extending eastwards into Lesotho and the Free State of South Africa
Altitude range: (300-)1100-1800 metres above sea level.
Habitat and Ecology: Widespread through the arid parts of succulent Karoo mostly on northern hill slopes on rocky outcrops often partly in the shade of low shrublets. In this area they grow in winter. Summer is a resting period after the winter rains. Associated species include Crassula corallina, Euphorbia aggregata, Euphorbia avasmontana, Aloe dichotoma, Aloe microstigma, Felicia filifolia, Melolobium candicans, and Kleinia longiflora.

Description: Pelargonium aridum is a small tufted plant to about 20-30 cm tall that does not has succulent above-ground parts. Instead, it has very interesting tuberous roots that are red and quite large. The leaves are finely divided, which is why it once was known as Pelargonium dissectum. The flowers are white or pale yellow spidery often with minute red lines.
Derivation of specific name: The epithet 'aridus,-a,-um'; from Latin 'aridus', dry, presumably refers to the withered appearance of dormant plants (dry or withered) or maybe to the dry habitat where this plant inhabits, (dwelling in dry soil).
Stems: Very short to 12 cm long, poorly branched (sometimes branched underground), with short internodes, unarmed but with more or less persistent stipules and sometimes lower parts of petioles, slightly woody, hairless, green at first but soon turning brownish-grey.
Leaves: Deciduous in winter, closely spaced, digitate-pinnately compound to 70 mm in diameter, with conspicuously long petioles (up to 17 cm long), membranous, with an indistinct, unpleasant smell and silky hairs and short glandular hairs in between. Segments linear 1-2 mm wide, margins more or less revolute, dark green. Stipules narrowly triangular, 3-7 mm long and persistent.
Inflorescences: Near-terminal, 2 to 5-flowered pseudo-umbel borne on an unbranched peduncle usually overtopping plant by about 10 cm but occasionally by as much as 50 cm. The pedicels are inconspicuously short (approx 2-5 mm long) in relation to the well-developed hypanthium.
Flowers. Sepals narrowly ovate 7-12 mm long. Petals 5, gently recurving and white to cream-coloured fading pale pink, with or without a few purple longitudinal lines near bases. Posterior two 15-25 mm long and 4-6 mm wide; anterior three 10-22 mm long and 2,5-4,0 mm wide. Stamens 5 long, and 2 short.
Fruits (mericarps): Bases 7-11 mm long, tails 25-33 mm long.
Similar species: Pelargonium aridum closely resembles on foliage characteristics Pelargonium crassipes, Pelargonium hirtum, Pelargonium hystrix, Pelargonium oreophilum, and Pelargonium sericifolium. On floral characteristics it shows a particularly close resemblance to Pelargonium hystrix and Pelargonium stipulaceum. 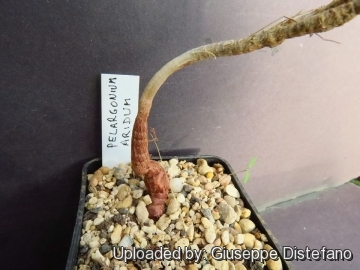 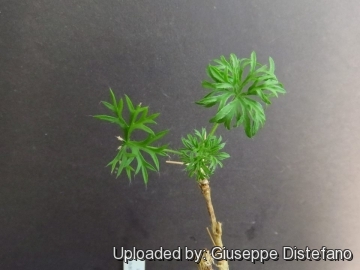 Cultivation and Propagation: Easily growing in cultivation. Pelargonium aridum is in cultivation in specialized collections and in botanic gardens. Seeds from ripe fruits germinate freely and new plants can be raised in greenhouses.
Soil: It does best with a mix that has almost no organic material at all. Perlite can be substituted for pumice, but it tends to rise to the surface of the mixture.
Water requirements. Water from early February to late April, then from early August to late November, at a minimum temperature of +14° C. Keep completely dry in summer and rather dry winter, at a minimum temperature of +8° C. Pelargonium cotyledonis in cultivation is usually so overwatered and overfertilized that it is hardly recognizable as the species that it is. Correctly grown, this is a beautiful, compact and dense plant.
Exposure: Light shade or morning sun in summer.
Frost Tolerance: Tender, it needs frost protection. Recommended minimum temperature is 8 °C or even above. Protect from frost.
Reproduction: There are two main ways to propagate members of the genus Pelargonium. Plant seeds any time of the year, but a spring or autumn sowing of seeds is usually most successful. Rooting cuttings of stems is another method.