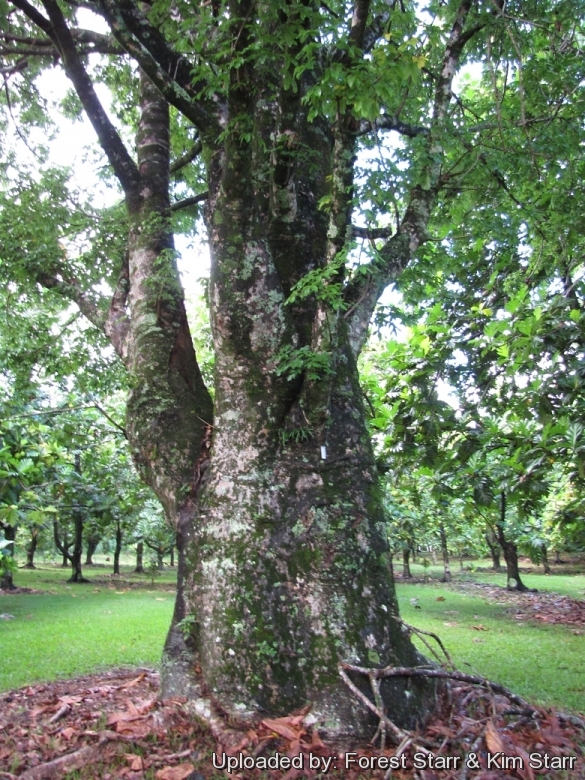 Origin and Habitat: Adansonia madagascariensis is one of six species of baobab endemic to Madagascar. The species extends from Antsiranana to the Sambirano region and perhaps Soalala. Occurrences in the south-east of the country appear to be Adansonia za.
Habitat and Ecology: It occurs in the Madagascar in a variety of vegetation types usually on calcareous soils: dry deciduous forest, mesic subdeciduous forest and coastal scrub. It also occurs perched on cliffs and on karstic limestone outcrops. The relatively high precipitation, basaltic soils and the shelter provided by the canyons of the Ankarana plateau support a dense tree cover, with A. madagascariensis as one of the dominants. Little is known of the conservation status but the clearance of the habitat as a consequence of slash-and-burn farming, has been extensive in places. Because the trees have been required to evolve a survival technique through dry seasons that often last for many months, the baobabs will happily shed their leaves for the duration, thus dramatically cutting down on transpiration.

Description: Adansonia madagascariensis is a rare small to large deciduous tree, 5-20(-25) m tall by about 12 m in spread. It is has massive succulent trunks with comparatively small, sparse, irregular compact crowns and is similar to Adansonia digitata, but with erect, pink-red flowers. The leaves have petioles but the leaflets are sessile and spatulate. It is rarely cultivated.
Related species: Adansonia madagaseariensis is closely related to Adansonia za and these two species cannot always be clearly distinguished. The former is characterized by its usually red petals, non-persisting style and broader fruit.
Stems: The trunk has little swelling, being bottle shaped, but can also be cylindrical or tapering from the base to the branches; it is usually unbranched until very near the top. Trunk diameter up to 3.8 m, trunk girth 12 m. Being deciduous, the branches are regularly leafless for long periods, contributing to the distorted appearance suggesting that the roots are spreading out from the top of the trunk and giving it the popular name of 'upside-down tree'. The wood is also very soft and fibrous, allowing it to store considerable reserves of water. The bark is usually smooth and has a remarkable capacity for regeneration, even when the bark has in places been removed around the entire circumference of the trunk, a process called girdling or ring-barking.
Leaves: Adult leaves palmate. Leaflets 5-7, obovate-spatulate, 9-10 cm long, 3-4 cm wide, glabrous, margins entire. Petiole 6-7 cm long.
Flowers: Solitary, erect; Sepals lorate, 18 cm long, 1-1.7 cm wdide. Petals pink-red, lorate, 13 cm long, 1.5 cm wide. Stamens numerous, fused in a tube to 9 cm long, free tips 5-11 cm.
Fruits: Globose-ovoid pendulous.
Chromosome number: 2n = 88. 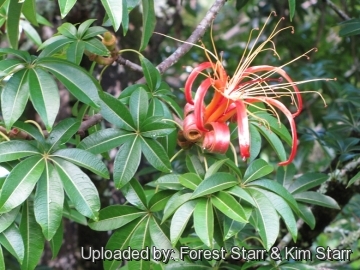 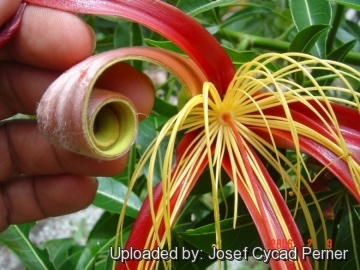 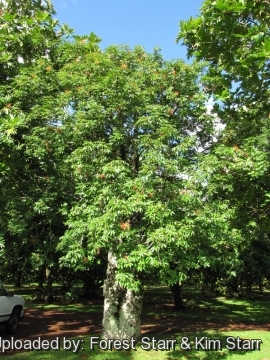 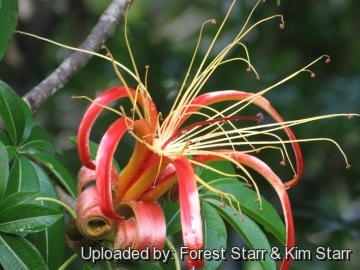 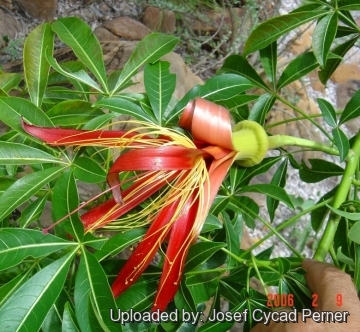 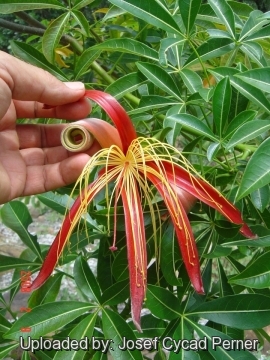 Cultivation and Propagation: Adansonia madagascariensis are quite easily grown from seed although they are seldom available in nurseries. Grow in good light, don't over-water and provide a minimum winter temperature of 10-13C as they cannot tolerate frost. Despite its adaptations to dry climates, baobab will thrive in rainy climates provided it has a well drained soil provided they are frost free and don't experience cold winters. Saplings can be effectively grown in containers for many years before becoming too large and requiring to be planted into the ground. In this manner one can move them out of the cold into a warm position in a glasshouse or indoors behind a sunny window to prevent frost damage. It can be also trained as a bonsai tree.
Watering: Baobab is very drought tolerant, and needs no water at all during the winter.
Uses: The young leaves and fruits are edible, but they are are rarely used as food. The large, pendulous fruits are an important source of vitamin C, containing up to ten times the vitamin content of oranges. The seeds consists about 37% of edible oil, but also contain cyclopropenic fatty acid (CPEFA); This acid may be harmful if consumed in quantity. Fibre known as bast is extracted from the inner bark to be used in rope making, a practice common among the indigenous populations in Madagascar on account of the medicinal properties of the bark.
Reproduction: The seeds should be soaked in a container of hot water and allowed to cool, they may then be sown after soaking for 24 hrs. To break dormancy, the seeds require a high moisture content between 80% and 90% field capacity. Sow in trays, pots, etc o in a well-drained seedling mixture containing one-third sand in a propagator or warm place with a minimum of 25°C to a soil depth of 5cm. The optimum temperature required is 27°C, with 30°C for maximum germination and plant growth. Seeds are best sown in spring and summer. Germination may take from two to six weeks. Baobabs grow reasonably quickly when they are young. It also can be started from cuttings.