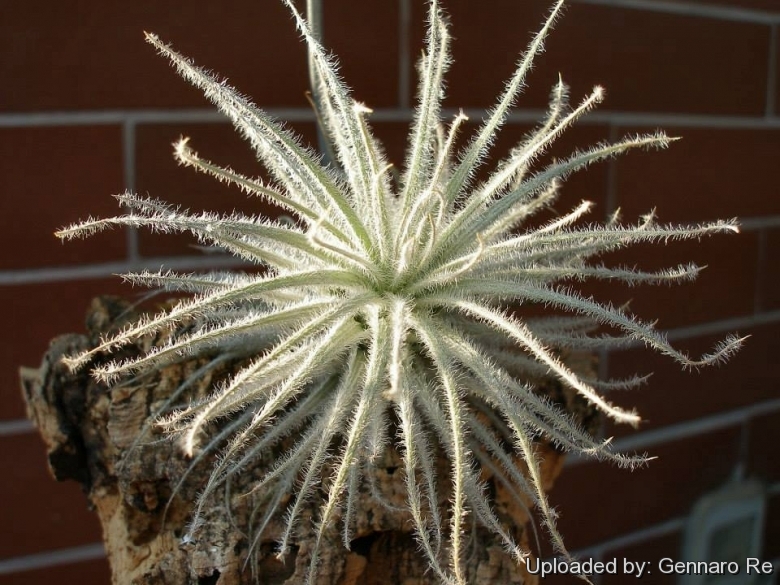 Origin and Habitat: Tillandsia tectorum is native to the high mountains of the Andes of Ecuador and Peru.
Altitude range: 980-2700 meters above sea level.
Tillandsia tectorum is a saxicolous (lithophytic) cloud-dependent species that grows in large, populations on rock outcroppings and cliff face amid cacti, but elevation and associated fog belts may influence occurrence more than local geology. This species, although often common in favorable sites, exhibits greater insularity consistent with the vertically compressed (cloud zones) and horizontally dissected nature of its montane habitats.

Description: Tillandsia tectorum is an outstanding caulescent species flowering 30-100 cm high that produces large and numerous silvery hairy scales that are quite unique in the genus. The armor of hairs permit the plant to absorb water and resist the very strong sun on the high plateaus of the Andes. It is cultivated on the roofs of the people from its original habitat, because it looks like a snowy tree. Its flowers are purple and violet emerging from a pinkish mass of bracts.
Rosettes: Growing to 30 cm high and 20 cm across, with leaves densely imbricate along the stem polystichous (arranged in a number of rows ) and resembling something between a spider and centipede with white legs. T. tectorum has a really impressive silhouette, lengthening while growing. Once a rosette has flowered, it will die but not before smaller rosettes appear at its base to replace it.
Leaves: Wiry, very narrow triangular, filiform-attenuate, white to ash-grey, striate, 12-25 cm long, sheaths amplexicaul, triangular-ovate, 15-30 mm wide at base, densely covered with fuzzy silvery white shield-like hairs (trichomes) except the inner base, blades spreading, 8-15 mm wide next to sheath. Tillandsia tectorum has perhaps the largest trichomes, and these are easily visible. The reflection of the light off these trichomes is what gives the plant its bright white countenance and protect the leaves from drying out.
Inflorescences: In spring, mature plants of considerable age produce an erect, slender peduncle, to 40 cm long, much exceeding the leaves, densely lepidote (covered with scurfy scales). Peduncle-bracts: sheaths imbricate, broadly ovate, 15-25 mm long, 8-12 mm wide, membranaceous, nerved, adaxial scattered lepidote, abaxial densely lepidote, reddish with 19 cm long filiform-laminate. The inflorescence is 6-10 cm long, 5-8 cm in diameter, densely digitate from about 5 spikes; primary bracts like the upper peduncle-bracts, much shorter than the spikes; spikes sessile, erect, somewhat spreading, lanceolate, 45 mm long, 12 mm wide, complanate, 5-10-flowered; floral bracts (modified petal-like leaves)densely imbricate, ovate lanceolate, short tipped acute, 10-17 mm long, 7-11 mm wide, about equalling the sepals, carinate, thin, nerved, soon glabrous, mostly toward the inside of the tip lepidote, reddish-purple and green or roseate.
Flowers: From each of the bract emerges a tiny, subsessile, pale lavender or light blue blossom often white shaded tips up to 2 cm long. Sepals free, lanceolate, 9-15 mm long, 3-4 mm wide, thin, the adaxial carinate, inside glabrous, outside towards the apex and along the midnerves lepidote. Petals tubular-erect, 20-25 mm long, lingulate, uniformly 3 mm wide, tip obtuse and bent outwards, white with a blue band in the middle section. Stamens and pistil of similar length, l2-17 mm long, visible in throat of corolla. Filaments filiform, white, plicate or straight. Anthers 2 mm long, subbasifixed, thin, black, pollen beige. Ovary 2.5-3 mm high, 2 mm in diameter, green. Stigma with very short, somewhat spreading lobes.
Fruits (capsules): Slightly longer than the sepals.The flowers are hummingbird pollinated. 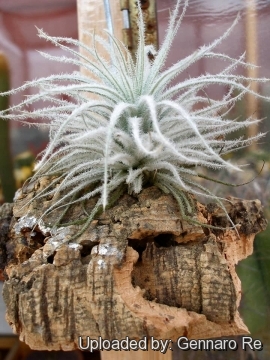 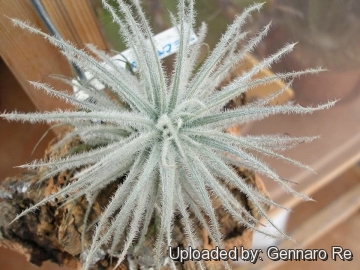 Cultivation and Propagation: The roof airplant (Tillandsia tectorum) is a slow-growing but easy to care species, requiring only bright light and controlled watering to prevent constant wetness. It is drought tolerant, and will thrive within a broad latitude of care conditions. Anchor it as a hanging basket specimen, in a rocky patio container or wedged in a rocky stone wall. Outdoors grow roof air plant nestled among rocks or in the highest reaches of a tree where it will receive very bright light and excellent air circulation.
Soil: It is is exclusively lithophyte, which means it naturally grows on rocks and needs no soil or transplanting.
Exposition: It grows best in full sun to partial sun. In the hottest climates, it is best given some afternoon shade. In a dark location the plant will gradually weaken and wither. In winter, find a luminous place.
Watering: It should not be watered as frequently as other airplants. Just like for carnivorous plants, water them with rainwater or demineralized water. You can mist the leaves once a week, and make sure the plant gets dry quickly, whilst in winter with low temperatures it is better to leave it quite dry for avoiding possible rottenness.
Fertilizer: The plant can grow without no fertilizer, because they make use of small traces of nutrients in the air, but you can apply a mild solutions (one-quartet strength) of foliar fertilizer at 3-month intervals to both garden and container plants.
Hardiness: They are sensitive to heavy frost, but can easily tolerate sporadic light frost. However they grow best in a spot with plenty of light, with summertime temperatures of 20-30 C degrees or higher and winter temperatures around 15 ° C. USDA Zones 8 – 11. Put them inside or outside in summer when the weather is fine. Can live in a wide range of temperature, from 15°C to 45°C.
**Uses: Each year tens of thousands of Tillandsia tectorum and relatives with similar silvery foliage end up simulating snow in Christmas displays in Ecuador. Despite heavy local consumption and additional collection for sale, this species remains abundant
Propagation:*** Division or seed. It is propagated by division of plantlets hung on bark slabs. Seeds are germinated on peat moss. Seeds need light to germinate.