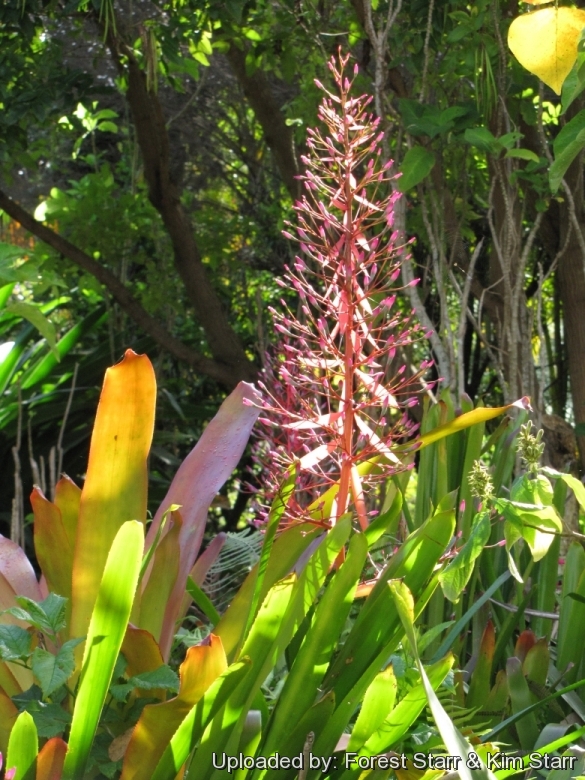 Origin and Habitat: Espirito Santo near the ocean, South-eastern Brazil.
Habitat: It grows on rocks and along the coasts on sandy formations.

Description: Portea petropolitana is an evergreen herbaceous terrestrial or lithophytic bromeliad with beautiful long lasting flower that stands tall erect above the foliage. It is quite a quite large species, that produces multiple pups and forms a large clump overtime and when the flower spikes emerge in late spring, the plant reach heights of 150-180 cm. It is monocarpic (bearing fruit only one time during its existence). There are a few variations within this species.
Stem: Nearly acaulescent or with a very short stocky stem.
Rosette: Funnel-shaped rosette, wide up to about 80-90 cm tall and in diameter with numerous leaves placed in way to form a central cavity usually full of water.
Leaves: linear, rigid, ascending, about 1 m long and 3-4 cm broad, apex rounded with a terminal thorn; margins with thick brown spines about 6 mm long. In sun, the foliage will be a bright yellow-green, and in shade it will be a deep rich green.
Blooming season: Flowers arrive in spring and early summer and last till late summer.
The inflorescence: Floral scape up to 70 cm tall at the centre of the rosette, yellowish-green colour, covered by imbricate bracts longer than the internodes, which ends with an erect compound pink raceme, formed several secondary racemes departing from a central axis, about 40 cm tall,
The papery bracts, under the single racemes, are salmon-pink, with a decreasing length from the base (10 cm) to the apex (1 cm); The single flowers are small and only barely open at the tip; peduncle 2-4 cm long; sepals, lilac, 15 mm long thorny at the apex; petals 30 mm long and 5 mm broad of a lavender colour, which gets more intense at the apex. The colours on the bloom spike include shades of rose, pink, purple, blue, teal, and lavender. The reddish bracts hanging from the flower spike have more vivid colour in sun.

Subspecies, varieties, forms and cultivars of plants belonging to the Portea petropolitana group 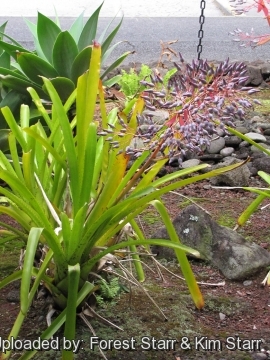 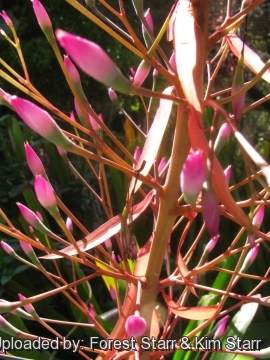 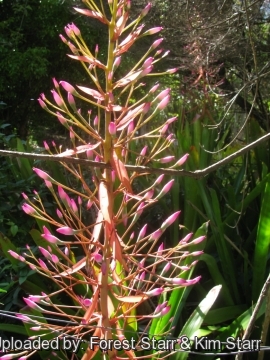 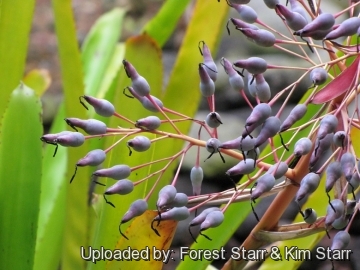 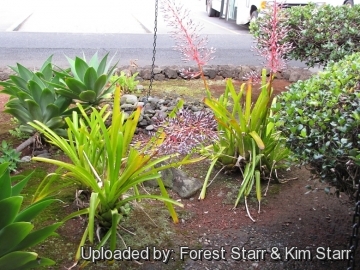 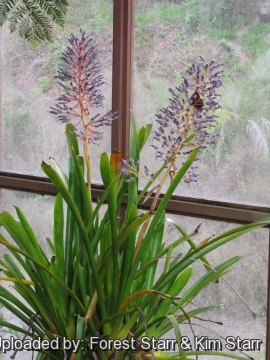 Cultivation and Propagation: Portea petropolitana is a bromelid of remarkable ornamental value, and of great landscape effect, due to its very informal foliage and the showy colour of the long summer inflorescence which lasts for some months. They are uniquely beautiful and last very long as a cut flower as well. By early summer the flowering has finished, but colourful fruits start to develop in their place. These enlarge throughout the summer, adding their own purple splash of colour to the garden. This plant can be grown as both epiphytic, but mainly as terrestrial, it is very durable and seems to thrive without a great deal of care.
Growing substrate: This bromeliad is typically grown in the ground or in containers filled with very aerated, porous, draining, moisture-retentive and rich of organic substance substrata, but it can also been grown epiphytically and roots are covered with moss or coarse crushed tree fern fibre encased in a container or wired to the surfaces of boulders, rough bark, rock walls, or tree branches. It is easily transplanted; however, it can also be grown in a semi-shaded garden bed, where it will form big clumps.
Exposition: Grow Portea petropolitana in bright filtered light both indoors and out. In the garden it grow best where it will get morning sun, but will also grows equally well in direct mid-day sun in hot summer climates. In apartment, it is to be preferably placed in a very luminous position.
Watering: It enjoys constant moisture from rain or sprinkler and with high local humidity. In summer the plants grow best with high humidity. In presence of dry air and high temperatures, humidity can be incremented with nebulisations, whilst in winter with low temperatures it is better to leave it quite dry for avoiding possible rottenness.
Feeding: Apply a very weak liquid feed every month or so over the growing season and a mild solutions (one-quartet strength) of foliar fertilizer at 3-month intervals to both garden and container plants. Apply fertilizer to leaves, roots, and reservoir.
Hardiness: It must be grown in a frost-free situation in open air in in the tropical and humid subtropical climates, with temperatures which it is good to keep over the 14°C, best 20-24°C. However its cultivation can be tried also in the warm temperate climates, in sheltered position, as it can stand, for short time, temperatures around the -4 to-6°C (but plants foliage will suffer little cold damage where frost settles on them). Winter hardy to USDA Zones (9b-)10-11. North of Zone 10, this bromeliad is usually grown in containers that must be overwintered indoors.
Pest & diseases: No serious insect or disease problems. Watch for aphids, thrips and scale. It is susceptible to mosquitos that will sometimes breed in the pools of water that are trapped between the leaves. Mealybugs infestations are also a frequent problem. Rot may develop if soil is kept too moist.
Tip: Remove old leaves from plant base and dead ﬂower spikes only. Remove older plant crown when it begins to fade.
Use: The plant can be cultivated under tropical shade trees as a groundcover or accent or to form edges and flower-beds, and also as a house plant or patio container filler.
Propagation: Division. When the flower fades, pups appear from axillary gemmae between the leaves near the base of the plants. The offsets can be detached and repotted when they have reached the dimension of one third of the mother plant. Be sure to provide high humidity for a month after propagating the offsets. The reproduction by seed is usually kept for the hybridization.: remove seeds from inﬂorescence and lay them uncovered on a bed of crushed tree fern fibres; keep constantly but moderately moist.