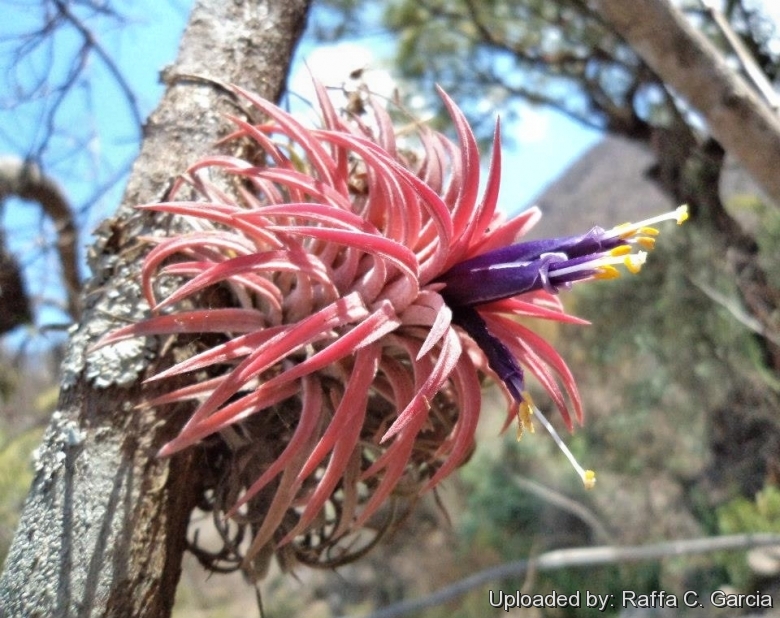 Origin and Habitat: Tillandsia ionantha is a Mesoamerican Bromeliad, which has a wide geographic distribution. The taxon is found in Mexico, Costa Rica, El Salvador, Guatemala, Honduras and Nicaragua. It is reported to have naturalized in Florida and is possibly found in Panama.
Altitude range: 0 to 1,800 metres above sea level.
Habitat and ecology: This species is a small, atmospheric Bromeliad that grows in large clusters of rosettes, probably by the production of offsets and is mostly epiphytic on deciduous trees, more rarely saxicolous. The plant has a large and ecologically diverse native range, growing in both xeric and mesic tropical habitats and is found in at least 12 ecoregions, comprising: lowland to montane, semi/decidous, sub/evergreen, gallery and mixed primary and secondary forests, mangroves, areas near beaches, cliffs, thickets, ravines and also along roadsides and highways, pastures and orchards, rocky savanna, chaparral and in riparian habitats. Seeds in Tillandsia are wind-dispersed, however, a high proportion of seeds are not dispersed and dispersed seeds rarely reach a greater distance than the crown of their host. Tillandsia ionantha is reported to be common in parts of its range, although it may be less common in others. It has also been recorded from protected areas. Tillandsia ionantha is one of the most traded bromeliads in Europe and the USA. The high horticultural demand and long life cycle of this species may increase the incentive to collect specimens from the wild for direct sale. This species is now grown on a commercial scale and produced in large numbers and is one of the most commonly available Bromeliads which may have helped to reduce collection pressures in the wild. Threats associated with climate change may pose an additional threat to this species for example increased frequency of hurricanes could potentially reduce recovery time for re-establishment of epiphytes

Description: Tillandsia ionantha, commonly known as the Blushing Bride, is a small and interesting evergreen epiphyte with compact rosettes of silvery arching leaves reminiscent of a pineapple top. Normally grey-green, the leaves in the centre of the plant will turn bright red when it blooms in order to attract hummingbirds to pollinate it. Often the entire plant turns complete red when it blooms just preceding the appearance of the violet flower clusters. This plant grows to 8 to 12 cm in height and usually forms dense masses.
Remarks: Tillandsia ionantha is one of the most attractive of the smaller species and is probably the one leading in popularity and a large amount of clones, hybrids, and cultivars have been created all with their own unique characteristics.
Stems: It most commonly grows as a stemless plant or rarely caulescent
Leaves: 30-40 forming a tight rosette, simple, linear, narrowly triangular, subulate-attenuate, entire and sessile, with arching tips, (2.5-)5 -10(-15) cm long (rarely over 6 cm long), to 5 mm wide, sheaths elliptic, about half as long as the blade. Covered with coarse, silvery-grey scales that both store water until it can be absorbed and act to reflect intense sunlight from the leaf surface, thereby preventing excessive water loss through transpiration. The outer leaves are green and the inner leaves are deep red at the time of flowering.
Inflorescenes: Tillandsia ionantha inflorescences are sessile or produced on a very short scape protruding from the centre of the rosette from March to May. The inflorescence is a simple abbreviated spike with polystichous flowers but actually a reduced panicle with the axes aborted and the spikes reduced to a single flower each; primary bracts lanceovate, acute, equaling or exceeding the sepals, membranaceous, lepidote toward apex. Floral bracts like the primary bracts but shorter than the sepals.
Flowers: Long-tubular purple-violet. Sepals lanceolate, acute, 16 mm long, membranaceous, free, the posterior carinate, shortly united at base. Petals erect, over 4 cm long, violet, the claw linear, the blade broadly elliptic, subacute. The yellow stamens and pistil protrude from the end.
Fruits: The fruit is a subcylindric, acute, septicidal capsule about 3 cm in length containing the seeds, each having a feathered tuft of hairs.
Taxonomic Notes: Two varieties are recognized: Tillandsia ionantha var. ionantha (most of species range ) and Tillandsia ionantha var. stricta (Oaxaca, Mexico). This species is considered to be fairly morphologically uniform across its range compare to more variable Tillandsia spp. such as Tillandsia recurvata. It is one of the atmospheric species with the lowest trichome cover and lacks a water storing tank. 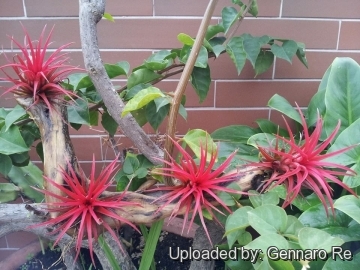 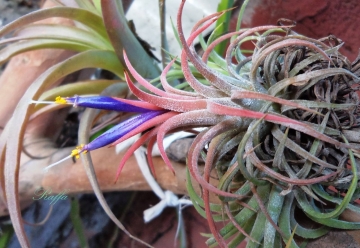 Cultivation and Propagation: The Blushing Bride (Tillandsia ionantha) is a slow-growing variety and perhaps one of the mainstays in most everyone's collection, requiring bright light and controlled watering to prevent constant wetness. The visual appearance of the ionantha variety makes it a favorite for use in air plant design. The striking contrast of the deep green/silver leaves with the bright red bloom cycle really enhances any space they inhabit. From single air plant displays to elaborate hanging terrariums, the ionantha air plant is a must-have for any tillandsia enthusiasts. It is drought tolerant, and will thrive within a broad latitude of care conditions.
Outdoors grow the air plant nestled in the highest reaches of a tree where it will receive very bright light and excellent air circulation.
Growth rate: It grows slowly, often needing two or three growing seasons to reach maturity. It produces a substantial root system and responds to good cultivation. If one has patience, a large clump can be produced in a few years.
Soil: It is is exclusively epiphyte, which means it naturally grows on trees and needs no soil or transplanting. Atmospheric tillandsias cling to just about anything from trees to cacti to telephone poles and can be affixed on a branch or piece of bark, or slabs of tree-fern.
Exposition: It grows best in full sun to partial sun. In the hottest climates, it is best given some afternoon shade. In a dark location the plant will gradually weaken and wither. In winter, find a luminous place. Its colour is generally more intense when budding and when getting lots of light.
Watering: It takes in all of the water and nutrients it needs from the air so it should not be watered as frequently as other airplants. Just like for carnivorous plants, water them with rainwater or demineralized water. You can mist the leaves once or twice weekly depending on the humidity levels in the greenhouse (or even daily during the hotter part of summer), and make sure the plant gets dry quickly, whilst in winter with low temperatures it is better to leave it quite dry for avoiding possible rottenness. The plants in nature are extremely drought tolerant.
Fertilizer: The plant can grow without no fertilizer, because they make use of small traces of nutrients in the air, but you can apply a mild solutions (one-quartet strength) of foliar fertilizer at 3-month intervals to both garden and container plants.
Hardiness: They are sensitive to heavy frost, but can easily tolerate sporadic light frost. However they grow best in a spot with plenty of light, with summertime temperatures of 20-30 C degrees or higher and winter temperatures around 15 ° C. USDA Zones 8 – 11. Put them inside or outside in summer when the weather is fine. Can live in a wide range of temperature, from 15°C to 45°C.
Propagation: Division or seed. Tillandsia ionantha is easily propagated by removal of offsets at any time of the year. The plantlets must be hung on bark slabs. In the greenhouse you can attach the offsets to slabs of oak wood with small staples holding the roots on the wood until they attach themselves. This can also be done with a small patch of hot glue (just not too hot) to hold the plants in place. Around the base you can use some reindeer moss to cover the roots and to hold moisture. Pups are produced after blooming, as is usual with most Tillandsia species.
Seeds are germinated on peat moss. Seeds need light to germinate. One easy way to tell apart plant raised from seeds or division is to look at the plant. While not always the case, generally it is true that if the leaves are relatively straight and short and there are no roots the plant is an offset taken from a mother plant. If the converse is true, that is, the leaves are long and curving and there is a root system present, then this plant will be a number of years old and grown from a seed.