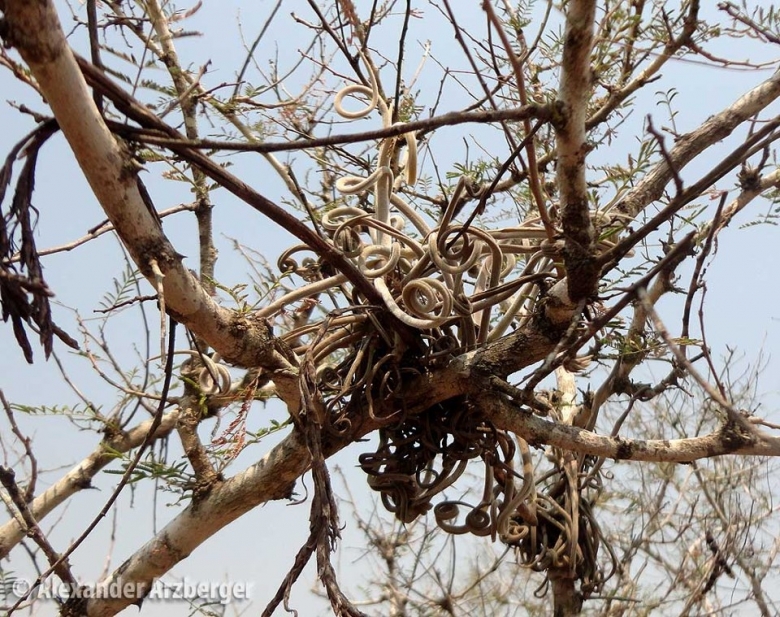 Tillandsia duratii Photo by: Alexander Arzberger
Growing habit (Mato Grosso do Sul, Brasil.) Tillandsia duratii does not develop roots, but rather has adapted its leaves to twist and spiral around its support.

Origin and Habitat: Tillandsia duratii grows in the Great Chaco region (western Bolivia, eastern Paraguay, and northern Argentina), it is also abundant in the Andean foothills of Argentina and southern Brazil.
Altitude range. This species occurs at elevations of 200-3500 meters.
Habitat and ecology: Tillandsia duratii grows as an epiphyte on trees, shrubs and cacti, and occasionally as a lithophyte on rocks, both sun or shade primarily in the drier areas. Its leaves are very curly and strong, and when new leaves emerge they wrap around higher branches toward the sun. As older leaves wither the plant begins to hoist itself up the tree, gaining the most optimal exposure. Tillandsia duratii sometimes covers much of a tree. This species is also found growing on the ground. Giant form of T. duratii in the Yungas, Bolivia, can be two metres long and a metre across, spread along the ground. In terms of sheer numbers and habitat range, T. duratii is one of the most successful Tillandsia species and is able to withstand rain or drought.

Description: Tillandsia duratii is a perennial epiphyte bromeliad with silvery grey-green leaves that hang like garlands without soil and without roots over trees and shrubs. The long-lasting, brilliantly coloured inflorescence are erect and strict (tight against the rachis) and produces lovely lavender flowers that are highly fragrant (it is the grand champion of fragrant tillandsias). The most interesting aspect of this species, besides its magnificent bloom spike, is the remarkable way in which the leaves tightly recurve. The plant grows upward along with the tree, pushing its way through the leaves and branches and maintaining its position of exposure to the sun. Tillandsia duratii often vary greatly in size. Small mature plants often bloom when about 20 cm in width and height. Giant specimens grow to 40 cm across and a meter high, not including the impressive inflorescence that is often another 80 cm (Even the small form can have a big inflorescence). For plant size, shape, and durability in combination with the bloom size, fragrance and longevity of its blooming cycle it is one of the most cultivated and admired tillandsia. There are two recognized forms of Tillandsia duratii , the nominate form (var. duratii) and Tillandsia duratii v. saxatilis L.B. Smith.
Stem: Short but well developed.
Derivation of specific name: This member of the Bromeliaceae family was given this name for an Italian, Durat, who was the first to cultivate this species in Europe.
Leaves: Polystichous, long, narrowly triangular, thick, rigid, pungent and involute (rolled outward and spirally coiled around a convenient twig or branch), densely covered by grey hairs. In nature, Tillandsia duratii almost always depends on these recurving leaves for growing support. As the older, lower leaves die back they desiccate.
Inflorescence (spikes): Impressive up to 60(-80) cm tall. The entire branching reproductive portion of the tillandsia is often referred to as the inflorescence. The most visible parts of the inflorescence include the stem, or stalk; the bract (modified leaves, or sheath, from which the flowers emerge); and the flowers themselves. The linear to lanceolate spikes are complanate erect and strict (tight against the rachis). The imbricate, distichous, densely lepidote floral bracts are fern green. The stem on a large specimen may be 4 cm in diameter.
Flowers: Sessile. Each flower has three large, mostly lilac or purple petals that are free, not connated in a tube. The throat of the corolla is white. Anthers terminal erect. Style piramidal (not thread-like). The blooms of Tillandsia duratii smell like grape soda. There has also been some speculation about pure white, dark violet, yellow, and peach coloured flowering forms of T. duratii.
Blooming season: The inflorescence of Tillandsia duratii develops for several months, after which it produces heavily fragrant blooms for another month or so, longer than any xeric species. The duration of the blooms varies among plants and even between the bract and flower, with the bract lingering for much longer than the petals and stamens that emerge from it.
Related species: Tillandsia duratii is similar to Tillandsia streptocarpa and in some cases there are specimens that seem to key out midway between. In general, both of these species have blue-purple flowers, which are distinctly fragrant. T. streptocarpa is usually a smaller plant with the spikes on the inflorescence closer together. T. duratii is usually a larger plant with the spikes spread out along the inflorescence, and with curling leaves.

Subspecies, varieties, forms and cultivars of plants belonging to the Tillandsia duratii group 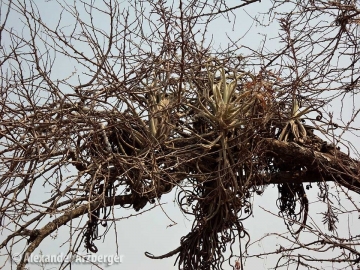 Cultivation and Propagation: Tillandsia duratii produces, when mature, large lilac flowers. This is among the most beautiful of its genus and one that is very easily cultivated. It produces more fragrant flowers for a longer period of time than any other species. Grow it in a well ventilated place mounted on wood or grown bare root. They thrive under a wide range of light, water, and temperature conditions. The water and light levels should be complementary, and when given in high doses, T. duratii often grows very large.
Moisture: From mid spring through fall, mist daily and once a month, mist with 1/4 strength water soluble fertilizer. Keep crown filled with distilled water. If grown outdoors, keep dry during winter.
Exposure: This plant likes bright indirect light and it is best placed in a sheltered spot in the garden during the summer to facilitate flowering. Dappled to Full Sun
Hardiness: USDA Hardiness Zone 9 to 11. These curious plants may be grown outdoors as long as temperatures do not drop below 5° degrees Celsius.
pH Range: 5.5 to 7.5.
Propagation: Division or seed. Plants can be divided at any time of the year. When removing offsets from tillandsias we usually remove the old leaves from the mother plant to reveal the base of the offset and enable us to remove it without damage. Tillandsia duratii is a little different from most other tillandsia. On duratii the offset is deeply attached and about ten leaves are tightly wrapped around the offset. These leaves should not be removed but tugged to stretch a little to help release the pup. Then estimate the length of the pup stem and gently cut through that leaf with a scalpel or sharp knife to reveal the base of the pup. Gently move the pup from side to side with upward pressure and the pup should release and come free. Roots grow only on seedlings, not on offsets. The plant relies on it’s leaf end curls to cling to a host.With the leaves still intact the mother should give another pup or two. Seeds are germinated on peat moss. Seeds need light to germinate.