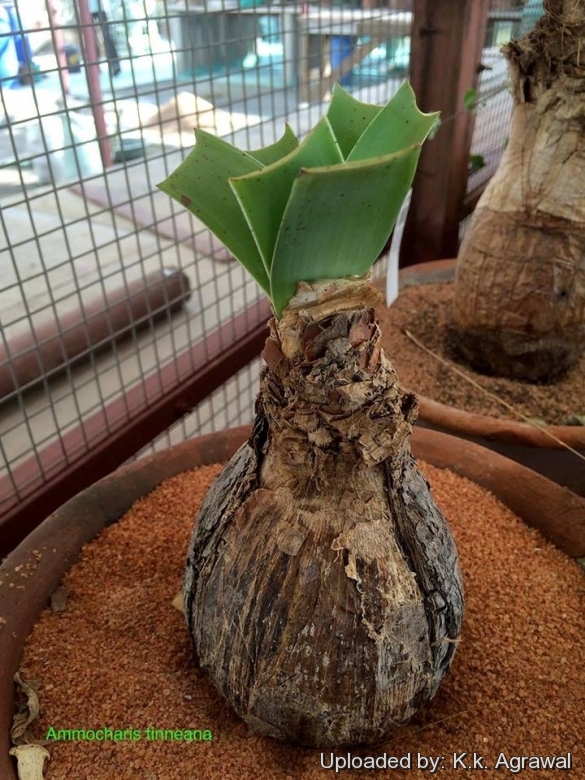 Description: Ammocharis tinneana is a perennial herb, growing from a very large underground bulb with a distinct aboveground neck, similar in appearance to Boophane. Leaves in a basal rosette, invariably with a "cut-off" look, due to grazing by wildlife or cattle. Flowers in a large teminal umbel, pink to carmine with white stripe on inner surface of petals, fragrant. In this species the stalk (pedicel) of the individual flower is about 1 cm long while in Boophane these measure several cm.
Derivation of specific name: tinneana: named after A. Tinné, who collected the type in the Sudan in 1873
Bulb: Up to 12 cm in diameter, with a distinct neck. In cultivation the remarkable bulb (sometime improperly called a caudex) is usually raised above the soil line so that this can be seen and more readily appreciated. For best results the bulb must be exposed only when the plants become mature enough, usually after several years (5-8 or more years) of underground growth, as the exposed bulb will no longer increase in size once it has been lifted above the soil line. In very old plants, the bulb can achieve massive proportions, so keep a plant for many years to grow an unusually large “caudex”.
Leaves: spreading on the ground in two opposite fans, 1–3 cm wide, length varying with age, appearing before to after the flowers.
Inflorescences: 10–30-flowered on 5–25 cm long scapes. Pedicels 1–4 cm long.
Flowers: Pink fading to magenta with age, or white, sweetly scented; tube 6–10 cm long; segments 4–8 x 0.3–0.5 cm, spirally recurved towards the apex at anthesis. Stamens slightly spreading, pink or white, 3–6 cm long; anthers 4–9 mm long, curved.
Blooming season: Plants in habitat flower from mid November to January (Southern Hemisphere) only after a good rainstorm. Temperatures at this time often reach above 40 °C. Plants can sometimes flower twice in a season after breaking dormancy, going back into dormancy and then flowering again with the next rainfall but usually without a flush of leaves
Fruit: Reddish, subglobose, 2–2.5 cm in diam.
Notes: This species can be distinguished from the similar Ammocharis coranica by the more delicate and slender perianth lobes and the shorter flower stalks, which are normally half the length of the corolla tube.

Cultivation and Propagation: Although usually grown only by specialist bulb-grower it presents no great difficulty in cultivation. The ease of culture make it an invaluable subject for the impassioned bulb-growers.
Soil: It needs a slightly acid medium comprising equal parts of well decomposed compost or finely milled bark, and river or silica sand (or pumice). Plant the bulbs with the neck at, or just below soil level and can remain in the same position for many years. Grows it in pots with a diameter of at least 25 cm. Give it excellent drainage.
Water: It is usually evergreen in cultivation but needs to be kept almost dry during its dormancy as the bulbs is disposed to dwindle and rot. Its winter rest must be absolute.
Exposure:It is most suitably grown in semi-shaded but it will even grow and bloom in full sun.
Hardiness: They are sensitive to frost, but are said to be hardy -5° C (or even less).
Garden uses: In warm and temperate climates grow it in sunny courtyard gardens, in raised beds and rockeries. In countries with cold winter climates, they are best grown in containers in a cool or slightly heated greenhouse. The plants are mostly grown by specialist bulb collectors, usually as container subjects.
Traditional uses: Snakebite antidotes. A sap extracted from its roots is used in preparing snakebite antidotes. Active Ingredient: Its root's sap.
Pest and diseases: The bulbs and leaf bases are susceptible to attack by mealy bugs, and the leaf margins are chewed by snout beetles and slugs at night.
Propagation: By seed or rarely by division of bulbs. Offsets are rather slow to form (if ever), and are best separated from the mother bulb straight after flowering, just as the new leaves begin to develop. Seeds form readily and should be harvested and sown as soon as they can be easily removed from the bright orange, fleshy berries. Seeds may take up to two months before the first leaf appears above ground, and a further four to five years to flower for the first time.