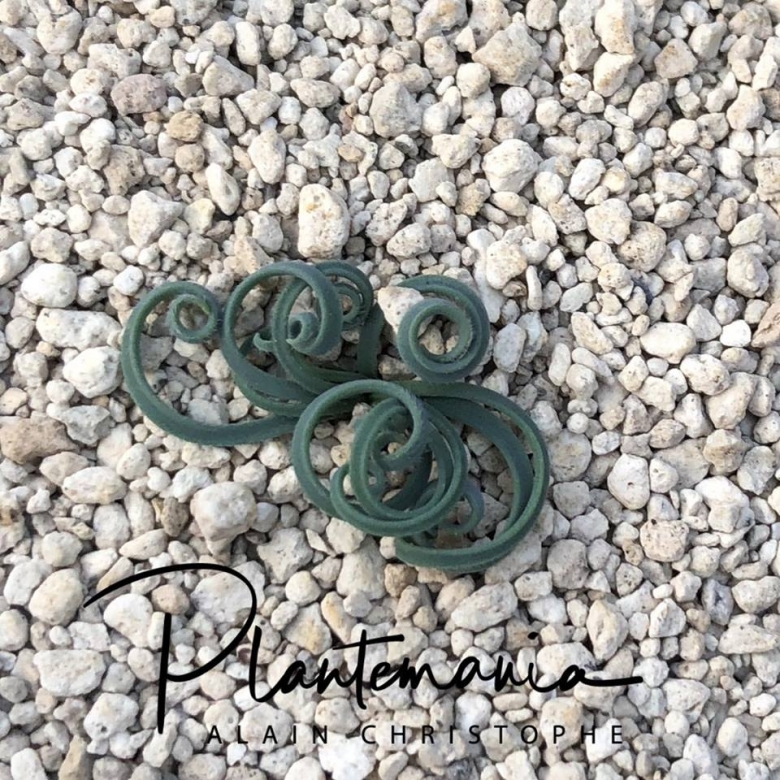 Origin and Habitat: Northern Cape and Western Cape (S Namaqualand and the Bokkeveld Mountains), South Africa.
Habitat and Ecology: Gethyllis linearis is found on sandy or gravely flats and on Quartz fields. The leaves are produced after the winter rains begin at the Cape, and disappear or nearly so, by the time the flowers make a very brief appearance, during spring or summer (mostly in October to November). The population trend is stable.

Description: Gethyllis linearis is a rare and rather beautiful deciduous bulbous geophyte up to 6-10 cm high, forming compact clumps. G. linearis has interest other than the flowers, it has a very unusual habit with glabrous, subsucculent, linear leaves which are wonderfully spirally twisted. The single trumpet-shaped flower is pale pink in colour and has a strong, strawberry-like aroma. The flower is long and slender and extends underground to the bulb and it is only in autumn or early winter that the succulent, maturing fruits come above ground. They are unusual in being winter-growing but summer-flowering.
Bulb: 1.5 cm in diameter.
Leaves: 5-10 spreading in a fascicle, about 6 cm long, 2 -3.5 mm wide, blue-green, glabrous and subsucculent, flat, narrowly strap-shaped, spreading to suberect, tightly coiled from a little above the base, mostly hairless and enclosed by a spotted basal sheath; the leaves appear in winter after the plant has flowered and set seed. The leaves have usually died down before the flowers suddenly emerge some time later.
Flowers: Large, fragrant, fairly fleeting, emerging in the heat of summer, quite unusual in having a subterranean ovary which gives protection from the heat. Perianth trumpet-shaped, long and slender, white tinged pink, and extending underground to the bulb. Tube 8 cm long or longer, the segments oblong-obvate, rather abruptly acute, 3-5.5 cm long, to 1.4 cm. wide, there are 6 stamens, monantherous. Filaments and anthers equally long. The style is curved.
Fruit: Fleshy, indehiscent, yellowish. The fruits slowly mature below ground but then emerge on to the surface in in summer-autumn after the flowers have died, just before the new leaves start growing.

Cultivation and Propagation: The Gethyllis are plants which need some care in watering as they are as they are usually from fairly arid areas. The seeds have short viability and germinate immediately. This gives time for the new bulbs to grow and become established before the onset of the next dry season.
Traditional uses: The fruit of various species of has a pleasant fruity aroma and has thus been used in the early Cape days to perfume rooms and linen. The perfume resembles that of ripe fruit and it resembled the aroma of the strawberry. The early Cape colonists have used an alcoholic infusion of the fruit of Gethyllis linearis as a remedy for digestive troubles. Other species of Gethyllis were also used to combat colic, flatulence and indigestion.