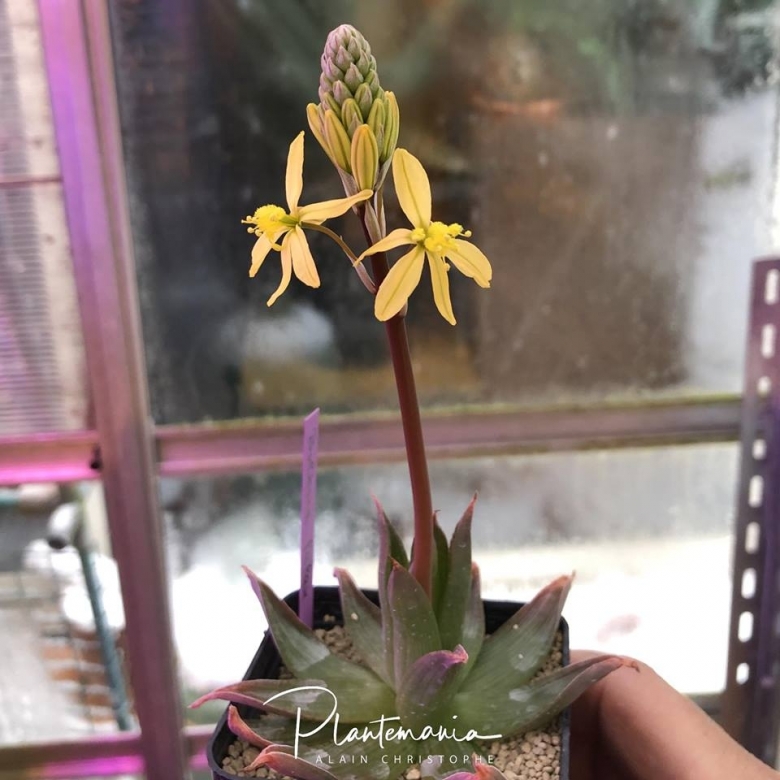 Origin and Habitat: Northern Cape, Western Cape, South Africa. Bulbine fallax occurs as sparsely distributed individuals on the Knersvlakte and northwards to Garies and the Kamiesberg.
Habitat and Ecology: Succulent Karoo. This species grows on quartzite patches with quartz pieces on the ground and hard, loamy, granitic soils in Namaqualand Klipkoppe Shrubland and on the Knersvlakte. Bulbine fallax flowers in winter (August to September).

Description: Bulbine fallax is a deciduous perennial herb up to 30 cm high at flowering time, with a tuber. It forms small flat rosettes of tessellate leaves during winter. Its foliage shows its best colouring in the spring when it is about to go into dormancy, consisting of greens and reds and browns. This species shows a family resemblance to the related Haworthia and Aloe.
Leaves: 12-20, fleshy, pressed flat on the ground. Upper leaf surface with bold patterns of several broad, rectangular windows bordered in pale green. Margin minutely hairy. The leaves wither and turn orange at flowering.
Florescence: Scape erect, with the youngest flowers and buds at the tip.
Flowers: Yellow, with fluffy stamens and with petals bent backwards