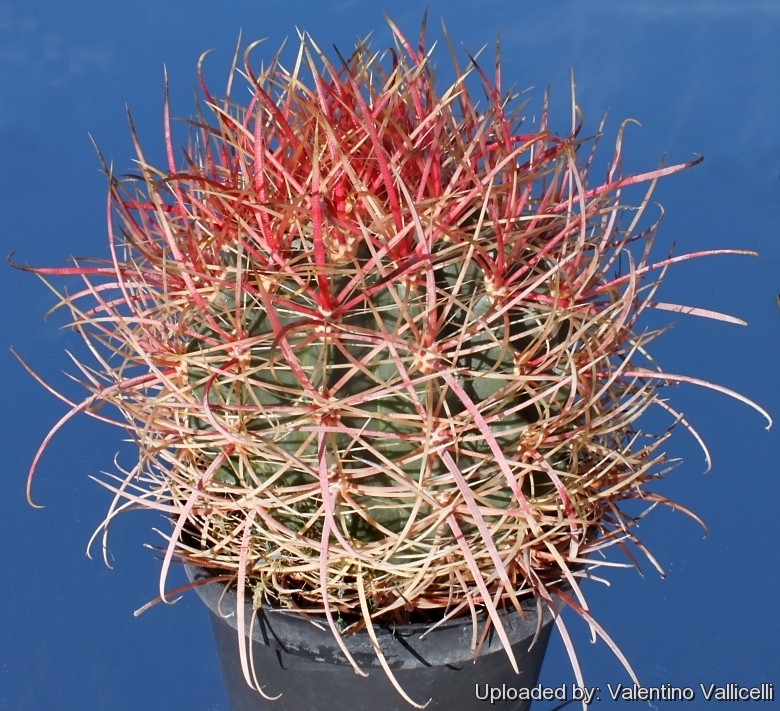 Ferocactus acanthodes Photo by: Valentino Vallicelli
grows slowly, forming in age a mound of thorns and then a narrow column up to 2m tall, with attractive curved spines that partly obscure the green stem. The spine colour is red but also yellow or pale grey.

Origin and Habitat: The various variety of Ferocactus acanthodes (= Ferocactus cylindraceus) are spread across central and western Arizona, southeastern California and southwards into Baja California and Sonora, Mexico.
Altitude: 600 to 1250 metres above sea level.
Habitat: This cactus is locally abundant in arid gravelly or rocky foothills, canyon walls, fans and wash margins among creosote bush scrub, it also utilizes slopes and acid igneous rock lands. The species is limited in its northwards range by frost conditions. To reduce the damage by frost the plant is found on south facing slopes and it leans to the south to protect the sensitive growing tip by placing it for best exposure to the sun. The dense shading of the growing tip by spines, fruit, flowers remnants and pubescence allow this species a further northward range and higher elevations than Ferocactus wislizenii or Ferocactus covillei.

Description: Ferocactus acanthodes (syn: Ferocactus cylindraceus) is a colourful barrel cactus usually unbranched, forming a single moderately tall column.
Stem: Green, spherical becoming columnar up to 2 m tall and 30 cm in diameter.
Ribs: 2,5 cm high and tuberculate.
Central spines: A large central spine and three auxiliary centrals form a crucifix shape, The primary central is 7-15 long, angles down and is slightly to moderately hooked, sometimes to 90 degrees. The other centrals are from 5 to 7,5 cm long. The centrals are noticeably ring ridged and flattened, with a flat upper surface and rounded lower surface. Spines can be very light grey to red and yellow, but darken to black with age.
Flowers: Yellow tinged with red appear in May and June at the crown of the plant, 4 to 6 cm.
Fruit: Fleshy, covered with scales, yellow or yellowish green, 5 cm long, 2,5 cm in diameter.
Remarks: The flowers on all subspecies are yellow, occasionally with a red tint.

Notes: N. P. Taylor (in Cact. Succ. J. Gr. Brit. 41: 91-92. 1979) rejected the name Ferocactus acanthodes ("... I propose that Ferocactus acanthodes (Lem.) B. & R. be placed on the list of nomina rejicienda, as provided for under Art. 69"). [Since Taylor's proposal was not published in the journal Taxon, the then Committee for Spermatophyta of the International Association for Plant Taxonomy has not addressed this problem.] 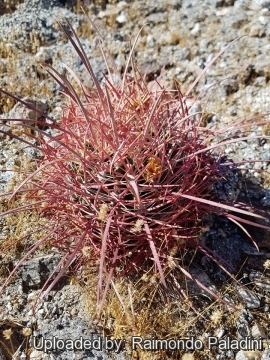 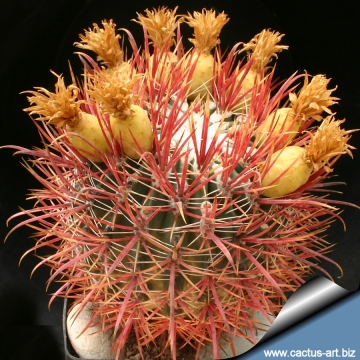 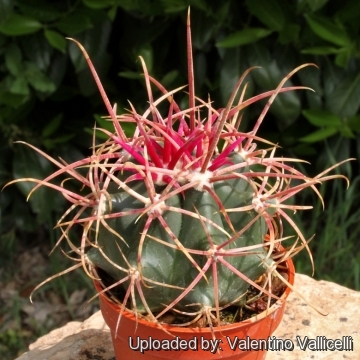 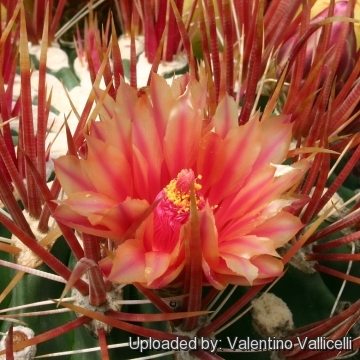 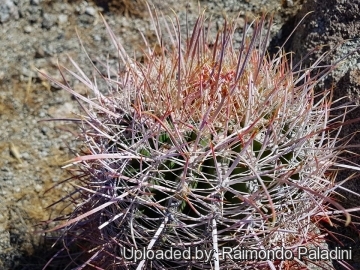 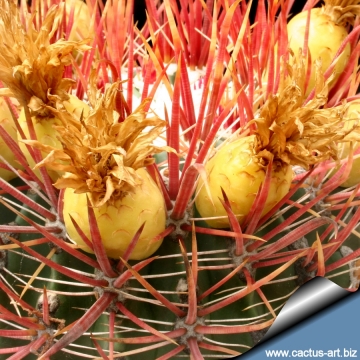 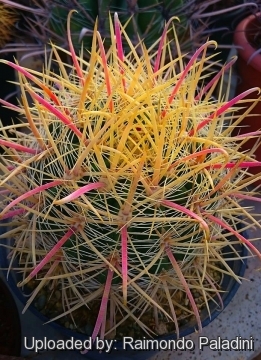 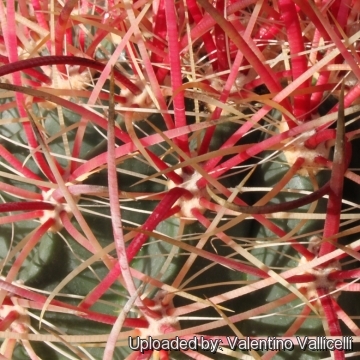 Cultivation and Propagation: It is a summer-growing and pretty easy plant thought slow to start. It makes great potted specimens, and is a great cactus for beginning collectors.
Growth rate: It is a slow growing species. Plant in good conditions will start to bloom when reach the diameter of only 15-18 cm.
Soil: It grows well in a rich, well drained soil such us clay, pumice, lava grit, and only a little peat or leaf-mould, but it isn't picky about soil.
Repotting: If potted, repot them preferably in the spring, if their roots become cramped. Generally, they should be repotted every other year in order to provide fresh soil. However, this doesn't necessarily mean they'll need larger containers. Fill about a quarter of the pot with broken crocks, gravel, etc. to promote good drainage. After repotting, do not water for a week or more. Use pot with good drainage. Eventually, as the plant becomes mature grow it slowly, and adopt a new repotting period, using intervals of every 2 - 3 years. Additionally grow it under drier conditions or with stronger sunlight.
Watering: Water regularly during the summer so long as the plant pot is allowed to drain and not sit in a tray of water (It rots easily, especially if over wet), and also needs to be avoided wetting the body of this plant while it is in sunlight. A wet cactus in the sun light can cause sun burning which can lead to scars or even fungal infections and death.. Let dry between watering. During hot weather you may need to water the plants more frequently so long as the plant is actively growing. From late September watering should be reduced to force the plant to go in to a state of semi dormancy, by October you should be back in to the winter watering regime. If the soil is allowed to be dry for too long root loss could follow but equally the same result would occur if the plants are both wet and cold. From March onward the plant will begin to grow and watering should be increased gradually until late May when the plant should be in full growth
Fertilization: Feed with a high potassium fertilizer in summer. Feeding may not be necessary at all if the compost is fresh then, feed in summer only if the plant hasn't been repotted recently. Do not feed the plants from September onward as this can cause lush growth which can be fatal during the darker cold months.
Hardiness: When dormant, the plant is very cold tolerant (down to nearly -5° C or less), but when left out it is more sensitive to frost. However warmth throughout the year will increase the grower's success (at minimum temperatures above 5 degrees centigrade during rest season). During the summer it is best to keep the plants outside where the temperature can rise to over 30 C with no harm to the plant. This plants need a period of cool rest in winter to produce flowers abundantly.
Exposure: They do need a lot of light to develop their typical spination, but different clones vary in their tolerance of full sunshine. However some protection in light shade is recommended during the hottest hours in summer. It can tolerate moderate shade, and a plant that has been growing in shade should be slowly hardened off before placing it in full sun as the plant will be severely scorched if moved too suddenly from shade into sun. If kept too dark they may become overly lush and greener and could be prone to rotting due to over watering.
Uses: It is an excellent plant for container growing. It always looks good and stays small. It looks fine in a cold greenhouse and frame.
Diseases and pests: Watch for infestations of mealybugs, scale insects and spider mite. Rot is only a minor problem with cacti if the plants are watered and “aired” correctly. If they are not, fungicides won't help all that much.
Propagation: Seeds are the only way of reproducing, remembering that seedlings dislike strong light and dry conditions and need to be repotted frequently. Seed Collecting: Permit fruit to ripen. Fruit must be significantly overripe before harvesting seed; clean and dry seeds.

by Cactus Art
There are a total of 15 Photos.
Click here to view them all!
Cite this page: "Ferocactus acanthodes" Text available under a CC-BY-SA Creative Commons Attribution License. www.llifle.com 14 Nov. 2005. 28 Jan 2021. </Encyclopedia/CACTI/Family/Cactaceae/10113/Ferocactus_acanthodes>