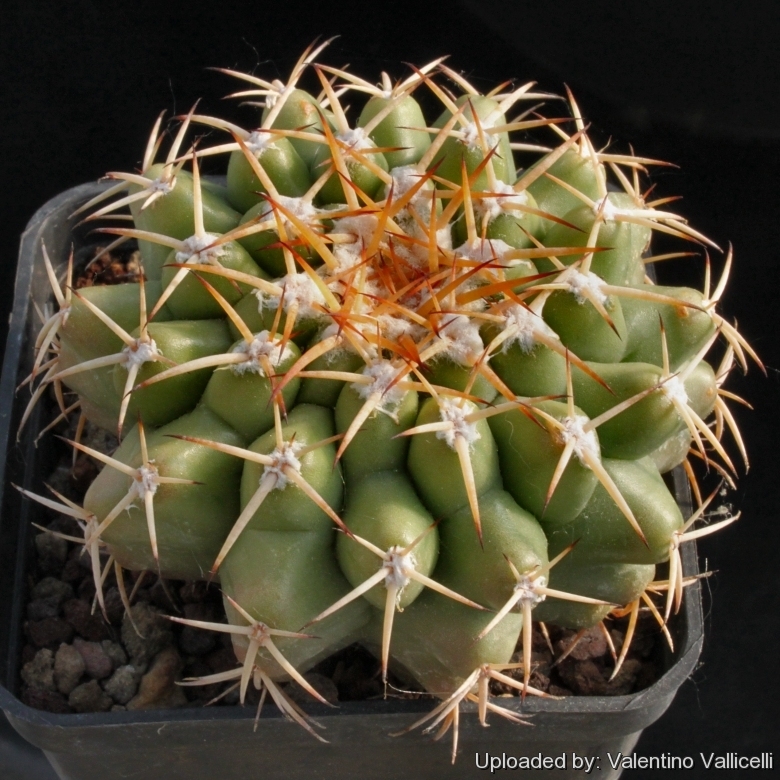 Discocactus heptacanthus Photo by: Valentino Vallicelli
The name eptacanthus means "with seven spines" but the actual number of spines varies from 5 to 11 depending on origin and size of the plant.

Origin and Habitat: Eastrern Bolivia, Paraguay, Brazil (Goiás, Mato Grosso, Mato Grosso do Sul, Pará, Rondônia, Tocantins), but only occurs in fragmented patches.
Altitude: It grows at low altitude.
Habitat: This cactus grows in the cerrado, mostly in exposed gravel of pedra canga (iron ore) but often in the shade of trees. It is occasionally found in sand or quartz gravel as well as on granite and sandstone outcrops. Generation length is 10 years. The main threat is deforestation of the species habitat for cattle ranching and renewable energy crops. Mining, pollution from mining and urbanization are other important threats in areas where the species grows.

Description: Discocactus heptacanthus is a solitary flattened cactus that form a cephalium at maturity and blooms on warm summer nights. Its fragrant flowers are pollinated by moths. It is a very variable species which received several different controversial names, many of them are still used in the trade. Some authors still consider it a complex of several related species and subspecies while Taylor and Zappi (1991) accepts only three subspecies: subsp. heptacanthus, subsp. catingicola, and subsp. magnimammus.
Stem: Globose or slightly depressed, light green to grey-green, 8-28 cm in diameter, 4,5-15 cm tall (without cephalium)
Cephalium: Small, 3-4 cm tall woolly, white to dull pastel with brow or black erected bristles 3-5 cm long.
Ribs: 10-22, up to 2 cm high, broken up into large, rounded tubercles, with more or less deep furrows between, sometime spiralling.
Areoles: Round or oval, at first tomentose, approx 6-10 per rib (in plants with cephalium).
Spines: Whitish, yellowish or brown becoming grey with age, more or less translucent, needle-like or flattened.
Radial spines: Typically 7, but variable in number from 5 to 11, up to 1,5 cm long (or more), stout, very rough and slightly recurved.
Central spines: occasionally a central spine.
Flowers: Nocturnal, fragrant, white (or pale pink), funnel form, nocturnal, 5-7,5 cm long and 5 cm in diameter.
Blooming season: Flowers come in profusion in summer, out of the cephalium.
Fruits: Usually white or pale pink. 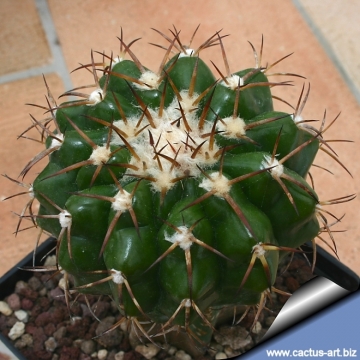 This variable species has ribs that are broken up into large, rounded tubercles, with more or less deep furrows in between. Photo by: Cactus Art
Send a photo of this plant.

Cultivation and Propagation: Discocactus heptacanthus is not the easiest plant to keep happy, so it isn't a plants for beginners, in fact collectors consider the Discocactus to be rarities which requires skilful cultivation. Under glass, it isn't difficult, but appreciates milder winter temperatures and more generous summer watering than most of the other genera of compact cacti. When grown to maturity, however, it possess an exotic look shared by no other cacti, and it generally attract a lot of attention.
Growing rate: It is slow growing.
Soil: It likes very porous standard cactus mix soil. Prefer a low pH compost, avoid substrata rich in limestone; otherwise growth will stop altogether.
Repotting: They generally resent being repotted and can take a long time to establish.
Fertilization: Feed with a high potassium fertilizer in summer.
Exposition: The plant tolerates bright situations but enjoys filtered sunlight or afternoon shade, inside it needs bright light, and some direct sun. Tends to bronze in strong light, which encourages flowering and heavy spine production.
Waterings: Discocacti are very rot prone when kept on their own roots and though they can’t endure long stretches of total dryness, too much water with cool will rot them, as their weak root systems tend to be inefficient at sucking up water from wet soil.
Hardiness: It is rather difficult to grow and frost tender, it can’t stand cold, or even fairly cool temperatures and should be kept at above 15° C if grown on its own roots (8°C if grafted).
Uses: It is an excellent plant for container growing. It always looks good and stays small.
Pests & diseases: It may be attractive to a variety of pests or diseases:
- Red spiders: Red spiders may be effectively rubbed up by watering the plants from above.
- Mealy bugs: Mealy bugs occasionally develop aerial into the new growth among the wool with disfiguring results, but the worst types develop underground on the roots and are invisible except by their effects.
- Scales: Scales are rarely a problem.
- Rot: Rot it is only a minor problem with cacti if the plants are watered and “aired” correctly. If they are not, fungicides won't help all that much.
Propagation: Seeds or grafting. Seeds germinate in 7-14 days at 21-27° C in spring, remove gradually the glass cover as soon the plants will be well rooted (ca 1-2 weeks) and keep ventilated, no full sun for young plants! .Young seedlings are often grafted on a low stock to keep the plant in a good shape.