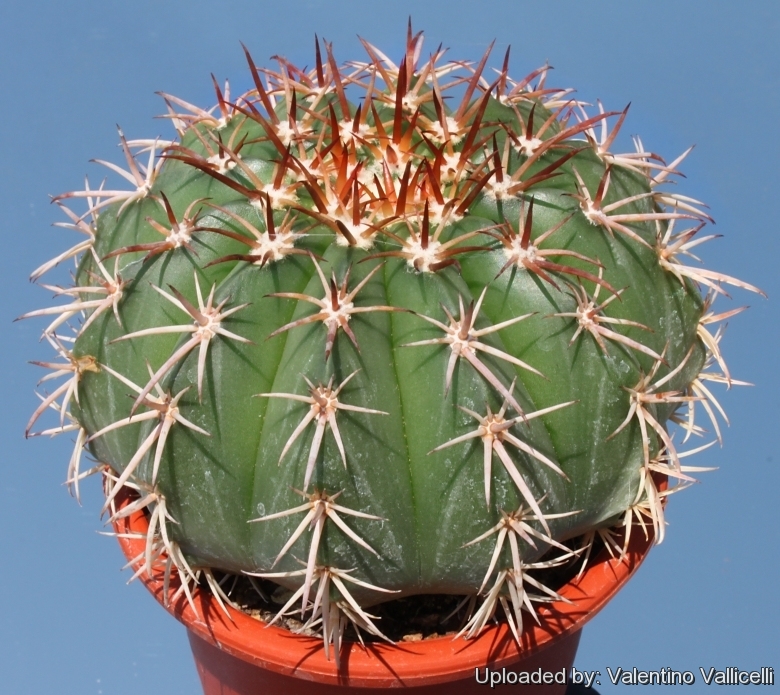 Origin and Habitat: Serra do Periperi above Mun. Vitoria da Conquista, state of Bahia in eastern Brazil e (extent of occurrence less than 100 km2). In 1989 M. conoideus was close to extinction at the type locality in the Serra do Periperi above Vitória da Conquista, Bahia, where it is sympatric with the widespread Melocactus concinnus. However, from the original locality another adjacent area of similar habitat could be seen and subsequently Brazilian cactus enthusiasts have confirmed that a healthy extension of the population exists. This area is more distant from the BR 116 highway and is now officially protected, although this has so far failed to halt gravel extraction. The population found in 2002, which was very healthy, has now been depleted because quarrying was moved to this location, which is ca 2 km from the type locality.
Altitude: 900-1,200 m above sea level.
Habitat: It grows in the transition area between the following habitats: Savanna (Cerrado), rocky upland (Campo rupestre ) and dry thorn forest (Caatinga ) mainly among sparse low shrubs and herbs in quartz gravel. The very squat stem of this species is thought to be an adaptation to minimise the effects of the frequent fires common in is its areal, although it can still get scorched on occasion. It is often found growing together with Melocactus concinnus. It is known from one location, and the population is in continual decline. It is threatened by habitat loss due to the extract of quartz gravel in which it grows and and by urban expansion, but some subpopulations have recovered well after quarrying for gravel was halted.. Part of the population is protected, however the rest are quickly disappearing. This cactus was heavily traded, however, it is now in cultivation and is not collected from wild populations.

Description: Melocactus conoideus is a short-spined small species.
Stem: Strongly depressed, depressed to hemispherical or conical (hence the specific name), about 10 cm tall and 17 cm in diameter.
Ribs: 11 to 14(-15) very low and rounded, up to 2.5 x 4 cm.
Areoles: Small, cushion-like 6.5-7.5 x 6.5 mm up to 15 mm apart..
Central spines: One, 20-22 mm long, 1,5 mm in diameter at the base, straight to slightly recurved.
Radial spines: Brown overlaid with grey 8-11 straight to slightly curved at the tips.
Cephalium: Fairly short usually less than 3 cm high (occasionally up to 4 cm tall) and 7.5 cm in diameter, reddish-bristly and abundant white wool.
Flower: Pinkish to magenta about 22 mm long and 10 mm wide. Nectar chamber 4 mm tall, 5 mm in diameter. Stigma lobes 4-5, white c 1 mm long.
Blooming season: Anthesis occurs in the afternoon from 13:30 (with a peak of activity between 15:00) and 15:30.
Fruit: Lilac-magenta, paler in its lower parts, about 18-21 mm long and 5-6 mm broad, both borne in the fairly short, reddish-bristly cephalium, which caps the vegetative part of the stem.
Seeds:1.05 -1.25 x 0.9-1.05 mm, testa-cells strongly convex at periphery.

Notes: The most remarkable part of a Melocactus is its cephalium a bristle-coated structure on the summit of the plant, only Melocactus, and the similar genus Discocactus possesses this type of permanent, apical, hatlike appendage. It’s only when Melocactus s reaches maturity that the cephalium begins to grow. Cylindrical, with a diameter distinctly smaller than that of the plant body below, the cephalium will keep growing for the rest of the plant’s life, but the body of the plant stops growing the moment the cephalium starts to form. . As the plants age the cephalium doesn’t increase in circumference it will steadily grow taller 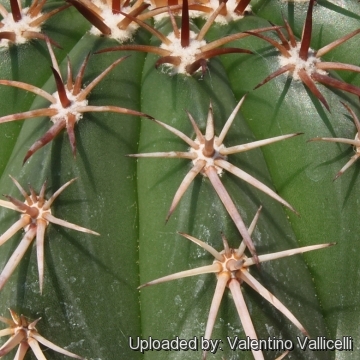 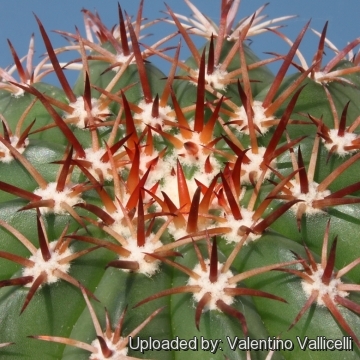 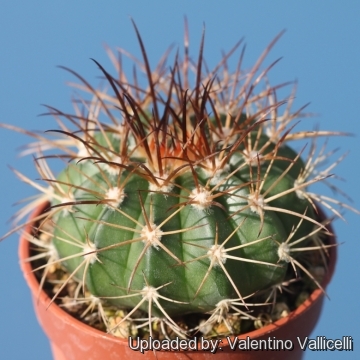 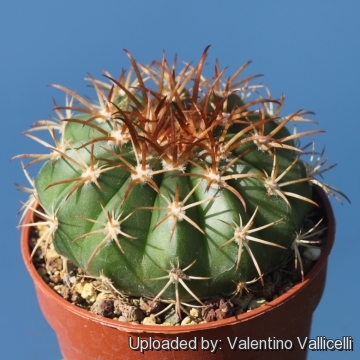 Cultivation and Propagation: These cacti are not the easiest things to grow and aren’t plants for beginners. Melocactus conoideus grows from April to October, it can’t endure long stretches of total dryness, and also too much water will rot it, as its weak root systems tends to be inefficient at sucking up water from wet soil. Nonetheless, again as a result of their tropical origins, they need a fair amount of water, but allow the soil to dry quite a bit before watering again. Melocactus rests from October to April but can’t stand cold, or even fairly cool temperatures, so is indispensable to keep it above 8-12°C at all times, severe damage or death occurring at temperatures that the great majority of cacti wouldn’t mind in the least and prefer more frequent water in winter than other cacti, say once a month. Do not feed in winter.
The root system is weak and generally resents being repotted and can take a long time to re-establish. The soil mix should be very quick draining, prefers very bright light, not as much as the most arid growing cacti, but plenty nonetheless.
Propagation: Exclusively by Seeds. Sow in February-march in a light, sandy, porous soil. Cover germinating tray with glass to prevent seed from drying out. Germination is most successful at a temperature of 18 to 22° C.