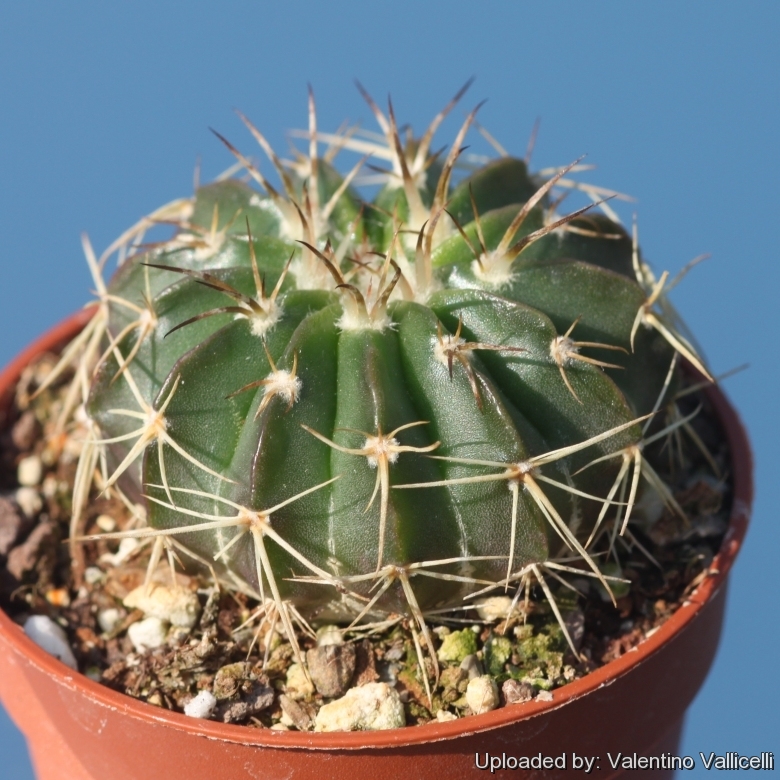 Origin and Habitat: Parodia turbinata occurrs in Argentina (Corrientes), Brazil (Rio Grande do Sul) and Uruguay (Paisandú, Río Negro, Soriano, Colonia, San José, Florida, Canelones, Maldonado, Rocha and Lavalleja). It has a wide range, a very large extent of occurrence and is locally abundant.
Altitude range: It can be found at elevations between 0 and 400 metres above sea level.
Habitat and Ecology: This species and grows on rocky outcrops in grasslands or pampas. The major threat to this species is cattle and sheep grazing because the specimens are ingested and trampled.

Description: Parodia turbinata is a low growing usually solitary cactus about 15 cm diameter starting out spiny then becoming more woolly. It will bear several glossy yellow flowers around the very woolly stem apex in mid summer.
Stems: The stems are flattened globular to depressed and growing partly underground, but the plant's stem in cultivation is often globular or ovoidal and aerial, dark green, to 15 cm.
Roots: Taproots large.
Ribs: 12-20, sometimes more, low, rounded.
Central spines: 1 often missing.
Radial spines: 5-10, straight.
Flowers: Yellow, to 3 cm in diameter, yellow, to 3 cm in diameter opening widely, and standing near the top, decorated with red pistil lobes which emphasize the yellow of the petals. The buds are tomentose.
Fruits: Small, purple.
Note: P. turbinata differs from Parodia sellowii in its flat body and less and shorter spination. No hybrids or intermediates are known. Seed-grown plants always show the distinctive markings of their parents.

Cultivation and Propagation: Parodia turbinata is an easy to grow tropical cactus that like a warm bright location, but more cold tolerant than most and less fussy regarding soil conditions.
Growth rate: It is a relatively rapidly growing and easily flowering species.
Soils: It prefer a very porous neutral to slightly acidic compost with plenty of extra grit.
Repotting: Use pot with good drainage.
Watering: Water regularly in summer, but do not overwater, keep dry in winter. It rot easily if the substrate is wet and cold, tends to lose its roots in winter. Best if watered with rain water.
Fertilization: Feed it once during the growing season with a fertilizer specifically formulated for cactus and succulents (poor in nitrogen), including all micro nutrients and trace elements diluted to ½ the strength recommended on the label. It thrives in poor soils and need a limited supplies of fertilizer to avoid the plants developing excess vegetation, which is easily attacked by fungal diseases.
Hardiness: Reputedly sensitive to frost , but less so if kept on the dry side prior to, and during, cold weather (hardy to -5° C for short periods). However warmth throughout the year will increase the grower's success (8-12°C during rest season).
Exposition: Outside bright filtered sunlight or afternoon shade, avoid full sun. Inside it needs bright light, and some direct sun. Subject to sunburn if exposed to direct sun for too long. Tends to bronze in strong light, which encourages flowering and heavy wool and spine production.
Uses: It is an excellent plant for container growing. It always looks good and stays small. It look fine in a cold greenhouse and frame or outdoor in a rockery.
Pests & diseases: It may be attractive to a variety of insects, but plants in good condition should be nearly pest-free, particularly if they are grown in a mineral potting-mix, with good exposure and ventilation. Nonetheless, there are several pests to watch for:
- Red spiders: Sensitive to red spider mite. Overhead watering is helpful in controlling mites.
- Mealy bugs: Occasionally mealy bugs they develop aerial into the new growth among the wool with disfiguring results, but the worst types develop underground on the roots and are invisible except by their effects.
- Scales: Scales are rarely a problem.
- Rot: Rot it is only a minor problem with cacti if the plants are watered and “aired” correctly. If they are not, fungicides won't help all that much.
Propagation: Direct sow after last frost. Seeds germinate in 7-14 days at 21-27° C in spring, remove the glass cover gradually as the plants develops and keep ventilated, no full sun for young plants!