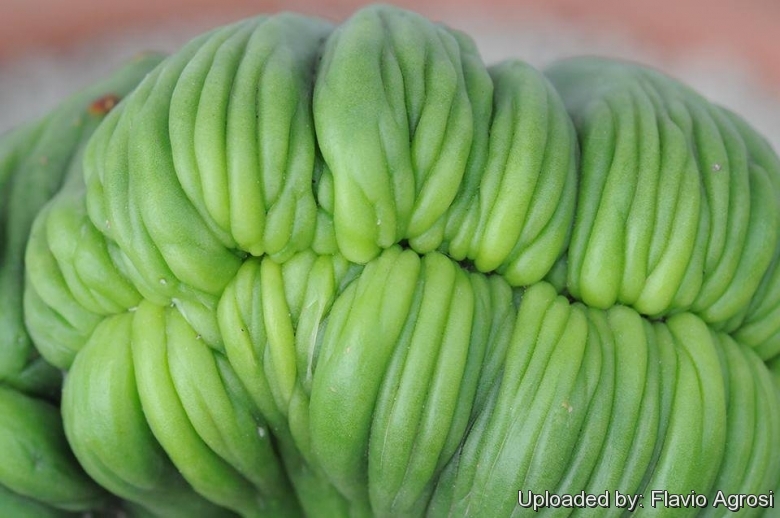 Description: This is the crested clone of the monstrous form of Trichocereus santiagoensis (a.k.a. “Crested Green Pepperoni Cactus”). It is one of the more fascinating and rare crested cacti sought after by cactus impassioned. This cultivar is stable and will never have a normal "patch" and remain mostly monstrose. The crests are quite unstable and rarely maintains the rare characteristic for many years, hence the rarity of this plant in cultivation.
Stem: Brigth-green, forming upright fan shaped sculpture that can slowly grow up to 25 (-40) cm tall. It shows different crested and monstrous shapes even on the same plant.
Spines: Absent or (if present) in group on rare areoles located in the lower part of the stem.
Spines: Honey-coloured to brown, located on the few basal nodes in groups of up to 4. They can grow up to 4–7 mm long.
Flowers: Not known. 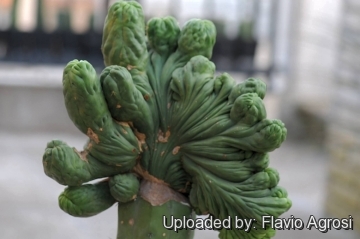 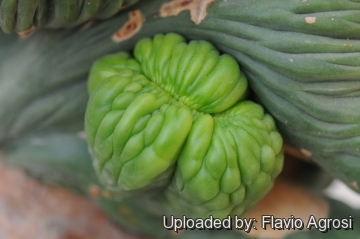 Cultivation and Propagation: It is easy to grow and cold hardy as low as -5°C (or less). Need a fertile, well drained soil mix. Water the plants well and allow them to dry before watering again. This cultivar seems to do better with a little more water than most cacti. In fact, its cultivation requirements are really more like 'normal' plants than most other cacti. During the growing season fertilize them monthly with a balanced fertilizer
Sun Exposure: Outside full sun, but during hot summers, the cactus are subject to sun burning, so grow them in light shade, inside needs bright light, and some direct sun.. During winter month, put them in a cool luminous place and encourage them to enter winter dormancy by withholding water and fertiliser over the winter as they will ethiolate, or become thin, due to lower levels of light. They are susceptible to fungal diseases if overwatered, but are not nearly as sensitive as many other cacti, especially in warm weather. They tend characteristically towards black rotted spots unless watering is moderate and only in hot weather, if kept damp through cold periods, they will invariably suffer.
Crested growth: A crested plant may have some areas growing normally, and a cresting plant, may revert to normal growth for no apparent reason. If you have any of the crested part left you need to remove the normal growth and leave the crested part behind this will need to be done regularly.
Propagation: It can easily be multiplied from cutting. Single sections are taken off, dried and rooted. It is also grafted on strong columnar species.