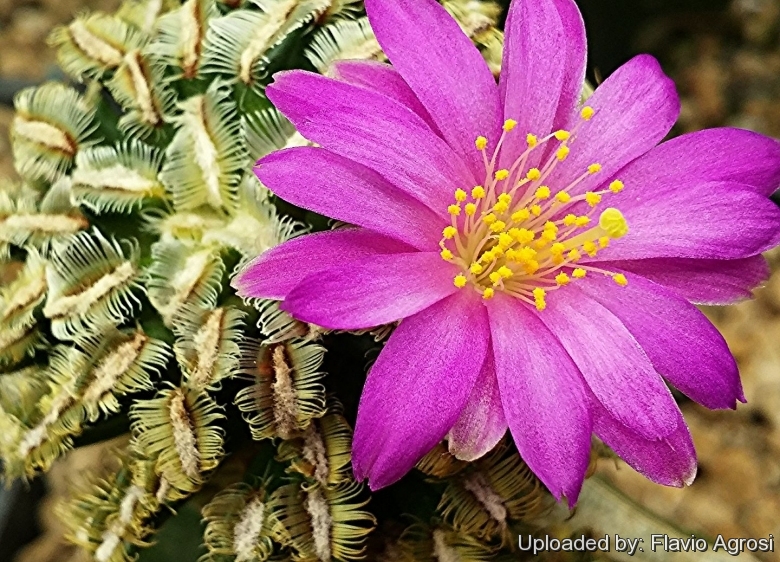 Origin and Habitat: Miahuatlan (Oaxaca, Mexico, Northern America) Mammillaria bertholdii is the only member of the Mammillaria saboae goup found the south of the volcanic belt. The remaining members of the group are in fact coming only from Chihuahua, Sonora and Durango.
Habitat and ecology: Mammillaria bertholdii occurs in small, flat rock wells in a more structured flat, rocky landscape, in which a fine, mainly mineral, substrate has accumulated.

Description: Mammillaria bertholdii is a small remarkable cactus species found in nature in the Mexican state of Oaxaca by Andreas Berthold in 2013 and formally described by Thomas Linzen in 2014. It is believed to be a new member of the Group of Mammillaria saboae in Series Longiflorae. It is a very flat geophyte that produce only a small disc of tubercles that can be seen flat at the soil surface, however these plants grow a large tap root below the surface of the compost. The tubercles and areoles closely resemble a Pelecyphora aselliformis, or even Mammillaria pectinifera. On the other hand, the floral tube itself, fruit and seeds clearly shows its affinity with the Group saboae.
The feathery spines are a perfect adaptation to extreme environmental conditions.
Spines: Pectinate.
Flowers: Typical of the series Longiflorae, crocus-like, funnelform, pink, unusually long-stemmed for a Mammillaria. Larger than the plant body itself, at least with plants on their own roots.
Fruits: Cryptocarpic (In a cavity in the plant body). Mammillaria bertholdii is one of the few species of cactus with cryptocarpic fruits. That is, the fruit and seeds are produced and retained inside the stem of the plant. After the flower is finished and dropped off, the stem closes over the fruit and the fruit/seed gradually ripens within. The following years the fruit may remain within the body at the axil, or may protrude a bit. A thin membrane will be above the part where ripe seed can emerge. As the plant swells with the new growing season, the membrane fractures, and some seed from the past years can little by little drop down and germinate in the close proximity, forming small colonies. But usually the seeds remain within the plant body for several years or for the whole life cycle of the plant, and frequently they will be released only at the death of the plant after the disintegration of the old stem.
It is possible to collect fruit and seeds only by means of a thin pointed forceps. The seeds' vitality lasts for many years and moreover seeds contain inhibitors that preserve them from premature germination. Generally fresh seeds won’t germinate very well, only old seeds do. The complete germination of this kind of seed may take several years (Some will sprout unexpectedly after 5 or 8 years!). Because of the above peculiarity, seeds and plants of cryptocarp Mammillaria (Series Longiflorae) are seldom available from commercial sources.
Similar species: Mammillaria bertholdii is one of a number of similar species (Series Longiflorae), all discovered in the 1960s, the others being Mammillaria theresae, Mammillaria saboe, Mammillaria haudeana, and Mammillaria goldii. 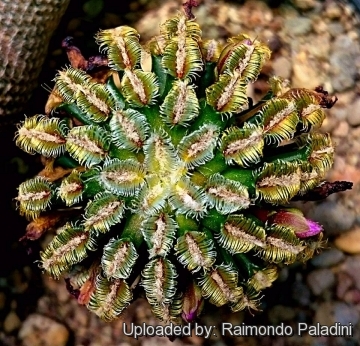 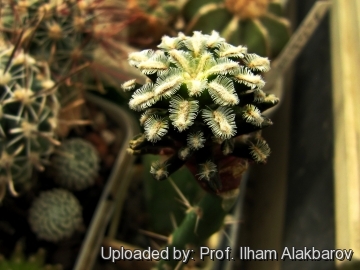 Mammillaria bertholdii Photo by: Prof. Ilham Alakbarov
Send a photo of this plant.

Cultivation and Propagation: Mammillaria bertholdii - like the other Mammillarias of the saboae group - is not the easiest of Mammillarias to grow and keep, this is though it is easier than some of its relatives such as M. goldii. But all this species require similar growing conditions, and a mineral-based potting mix is preferred.
Water requirements: Water sparingly during the growing season; keep very dry in winter. Pot plants are quite wet-sensitive. Care must be taken with watering, and it needs good drainage. Hardiness: It is recommended to overwinter this plant in a bright and warm greenhouse with at least 8-10° C , but it may prove to be quite cold resistant.
**Exposure:*** Full sun - Light shade.
Propagation: Seeds, cuttings or grafting. Germination of the seed can still prove to be a challenge