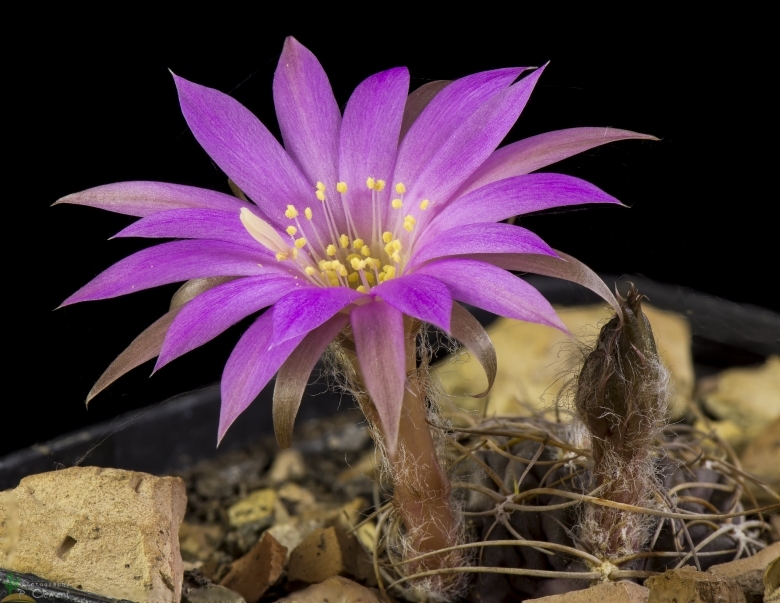 Description: Lobivia wrightiana fa. chilensis is an undescribed name (nomen nudum - Abbreviation n.n. a title lacking valid description). It was first named by the Czech cactus trader Karel Knize, resident in Lima, Peru, and in 1975, Walter Rausch in "Lobivia 75", page 23, shows an image of this plant (Lobivia chilensis - Knize - n.n.). It has been said that Knize gave most of the plants he collected/sold new names to increase sales. Knize never properly described his plants, he just gave them names and sold them. He deliberately hunted down unusual looking things so it can be difficult to characterise them in terms of the existing described species. Rausch says this is an undescribed variety of the attractive Lobivia wrightiana, with red rather than white stigmas. It comes from the Peru-Chilean border, whereas L. wrightiana is from Central Peru. In 1980, after his habitat research, Ritter in his "Kakteen in Südamerika" states that L. chilensis does not exist as described above, also casting doubt on the fact that it may be a Chilean plant, because the Tacora Volcano area is located on border of three countries: Bolivia, Chile and Peru.
In 1985 Raush published "Lobivia 85" where, accepting Ritter's theory and ironizing with Knize, reduced Lobivia chilensis (Knize) to synonym of Lobivia wrightiana (Backeberg - 1937). Still, the plant is so accepted (cf. Rod & Ken Preston Mafhan - Cacti: the illustrated dictionary)
It is a beautiful, hardy plant, and easy to grow as many lobivias. 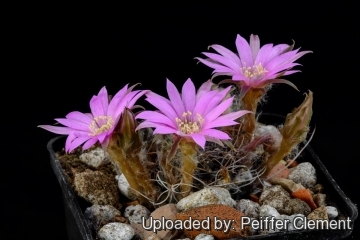 Cultivation and Propagation: It is a good beginner cactus and easy to grow and flower. It is quite resistant and occasionally gets covered by bright showy blossoms also neglected in a dry windowsill. Requires good drainage and very porous potting mix. Watering Needs Need regular water in spring to fall but do not water again until dry. Also, it is a species that is dormant in the winter and require very little water (maybe even none) during the cold months. Frost Tolerance: Light frost protection required. Minimum of 5ºC for safe growing (but hardy up to -5°C or less). Requires to be kept below 7°C in winter to flower well in the spring. Sun Exposure: Requires bright light (protect from strong midday sun). In shade the body colour will remain mostly green, while full sun will darken it and give it red/brown body colour. Can be sunburned if moved from shade/greenhouse into full sun too quickly. The amount of sunlight it can withstand without scorching depends upon the how hot it becomes in the summer in the locale in which it is planted. It will have more colour if it receives more light. During the spring it may be able to take full sun until the heat arrives at the end of spring. In an area that has hot afternoon sun, it may be able to take full morning sun, but requires afternoon shade or afternoon light shade.
Propagation: Seeds or offsets that appear at the base; leave them attached to form a cluster, or wait until they are 1/3 the size of the parent and then detach and plant.