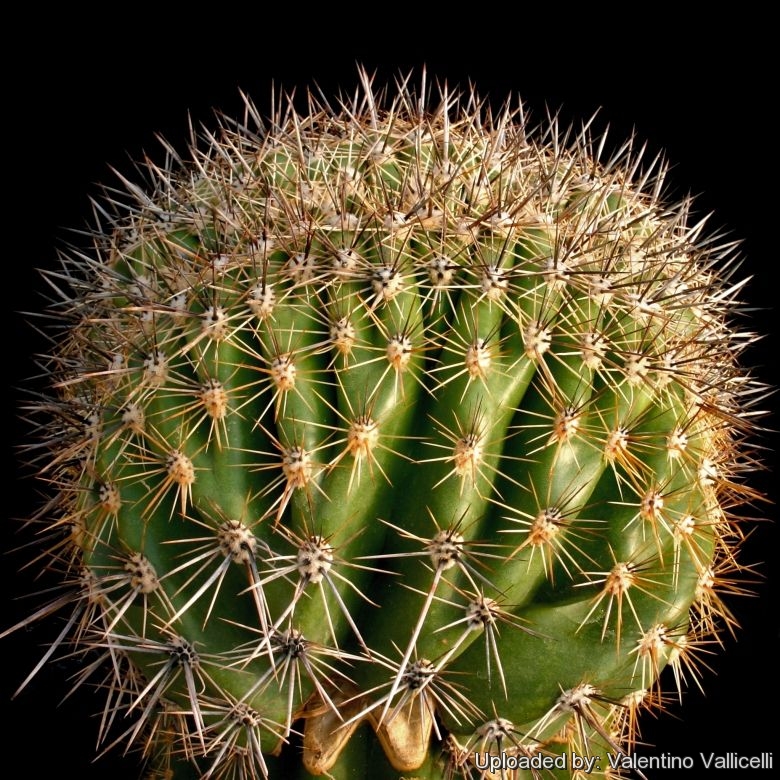 Origin and Habitat: Primarily in Arizona and in southern California just west of the Colorado River, south into Sonora, Mexico.
Altitude: From nearly sea level to approximately 1350 metres above sea level

Description: The standard saguaro, Carnegiea gigantea, long popular because of its immense size and unique architecture is, perhaps, the more famous of all cacti. It is a large, tree-like columnar cactus that develops a sturdy trunk and with time can produce numerous arm-like branches. In nature Carnegiea gigantea has produced some extraordinary fan or twisting crested forms growing at the top of 3-4 (or more) metres tall trunks. These beautiful crested forms (Carnegiea gigantea f. cristata) are very rare in collection and highly priced for their sculptural shape and size. Older crested plant grown outdoor in the ground (in mild areas) can reach an imposing size (up to 3 (or more) m tall weighing several tons.
Habit. The saguaro is a large, treelike, columnar, perennial succulent. It usually attains the height of about 9 metres, but exceptionally it can tower as high as 16 metres and , dwarfing every other living thing in the desert. The morphological behaviour of Carnegiea gigantea is also quite remarkable. It shows a marked dimorphism. In its juvenile (or sterile) stage it forms a green, cylindrical solitary columnar stem up to 3 metres tall, mostly with 11-15 stem ribs. The areoles are separate, spaced about 2-3 cm apart on the ribs, with 15-30, stout, rigid spines, grey to blackish, diverging, straight the longer central of which (3,5-) 5,5-11 cm long and (0,8) 1,1-2,3 mm in diameter, these areoles not producing flowers. In mature (Adult or fertile) stage it start branching forming stems with shallow, blunt ribs often 19-25. Areoles closely set with flexible, bristly spines 2,2-3 cm long and 0,3-0,4 mm, producing flowers. First branches usually arising in the region of transition between the juvenile and mature part, the branches fertile. The flowers and fruits are found only on the adult bristly branches, high enough to escape the grazing of herbivores.
Stems: Columnar, green, 30-75 cm in diameter, unbranched, erect, and straight with (on older plants) one to several branches originating 2-3 m above the base. Stem tissue turning black when cut or injured. The vertical ribs enable Carnegiea stems to expand as moisture is absorbed and to contract as it is used.
Flowers: White and showy 8,5-12,5 cm long, 5-6 cm in across, opening in late afternoon and remaining open until the midday or later of the following day depending on temperature, then closing permanently, funnelform to bell-shaped, with creamy white petals around a dense group of yellow stamens. Pericarpel and floral tube 6-10 cm long, covered with many distinct scales, extending down and clasping, and felted areoles. Though normally found at the end of the main trunk and arms just below the stem tips, flowers may also occur down the sides of the plant. First buds emerging on south or south-west side of the stems. Flowers will continue to be produced throughout a saguaro's lifetime. A stem might produce more than 100 flowers at a time! The saguaro has more stamens per flower than any other cactus flower. To set fruit, flowers must receive pollen from another plant or from flowers on another arm of the same plant
Fruits: Obovoid, with scales, spine-less (or occasionally with a few bristly spines), 5-7,5(-10) cm long, 2,5–4,4 cm in diameter, fleshy, green, red or purple at maturity, dehiscent and splitting open, along three or four vertical lines, exposing the bright red interior, the pulp juicy, bright red, sweet, and edible.
Phenology: Flowers appear from late April to early June. Fruits ripen from late May until mid July while stems grow mostly during rainy periods in July, August, and September.
Seeds: Obovoid, 1,8-2,1 mm long, dark red-brown to blackish, shiny, nearly smooth, and edible.

Subspecies, varieties, forms and cultivars of plants belonging to the Carnegia gigantea group

Notes: The cause of cresting is not fully explained; biologists disagree as to why some saguaros grow in this unusual form. Some speculate that it is a genetic mutation. Others say it is the result of lightning strike or freeze damage, but whatever the stimulus, the growth point of the stem has switched from a geometric point, to a line, which folds and undulates as the crest expands. Though these crested saguaros are somewhat rare (1 in 250,000), cresting occurs naturally throughout the range of the Saguaro, and can be encountered in many other cactus species.
In the ontogenesis a crest can appear any time, but development of crests on large columnar cactus species ( such as the saguaro Carnegia gigantea) in the early stages of ontogenesis is unlikely. On the other hand, small species may crest early already at the cotyledons stage. 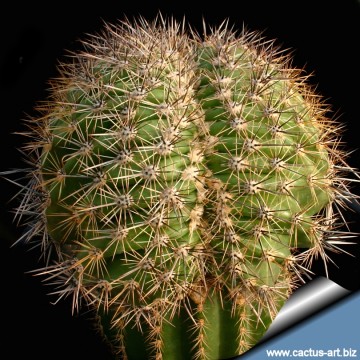 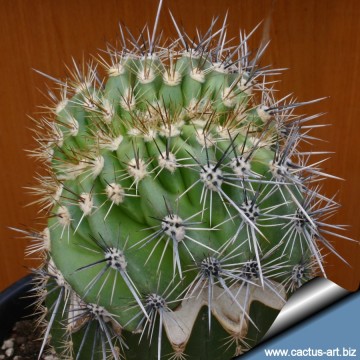 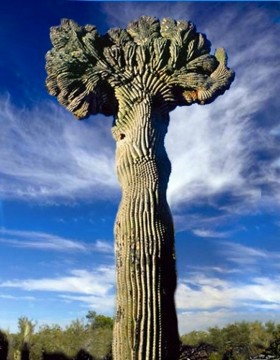 Cultivation and Propagation: Saguaros grow very slowly and are cold intolerant. Make sure that your saguaros are not exposed to freezing temperatures, or they may die. The plant needs a well drained soil mix. Water regularly in summer, but allow to dry fully before watering again. During the winter months they should be rather kept dry. Since they are big sized plants, they need plenty of space for their roots. Repotting should be done every other year, or when the plant has outgrown its pot. Exposure: Light shade when young, full sun later.
Propagation: Grafting, since cutting root hardly.