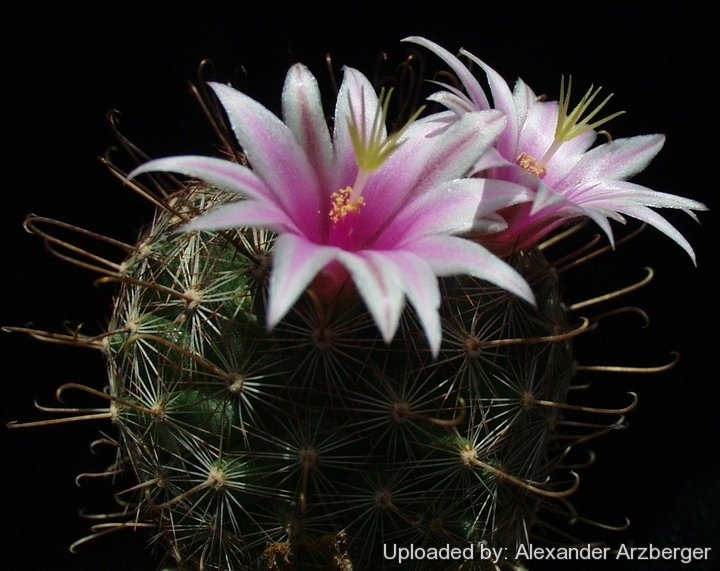 Description: Mammillaria microcarpa var. auricarpa [Sphalm. 'aureicarpa'] is a small cactus up to 6 cm. diameter, elongate and solitary or more commonly offsetting either basally or near the middle, often in small clusters (but sometime they can form clusters of many individuals). This species has many pale, radiating spines and a pale yellow or yellowish brown central spine, 12-25 mm long usually hooked. Flowers are 4 cm in diameter, pink, and are followed by elongate golden yellow berries. It is generally included within (as a synonym of) Mammillaria grahamii , suggesting that there is not really a fundamental difference between the two. The name auricarpa, meaning "golden yellow yellow fruits", refers to the peculiar colour of mature berries. The yellow coloured fruits (never red), and pale yellow central spines helps distinguish this variety from the other red fruiting forms.

Subspecies, varieties, forms and cultivars of plants belonging to the Mammillaria grahamii/sheldonii group 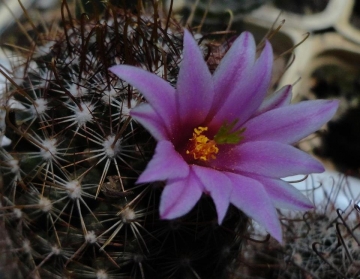 Cultivation and Propagation: Mammillaria microcarpa var. auricarpa is a large-flowered mammillaria which is sometimes difficult to cultivate. This plant blooms easily and needs lots of light. Use a pot with good drainage and a very porous mineral-based potting mix. Potted plants are quite wet-sensitive, especially in light of its small root system. Water sparingly during the growing season, let soil dry in between to prevent root rot, keep very dry in winter. Feed with a high potassium fertilizer in summer.
Usually it is recommended to over-winter this plant in a bright and warm greenhouse with at least 8-10° C, but it has proven to be quite frost resistant (if kept dry it is hardy as low as -7° C). A resting period in winter and strong light are necessary so that it can flower properly.
Propagation: Through seeds and cuttings.