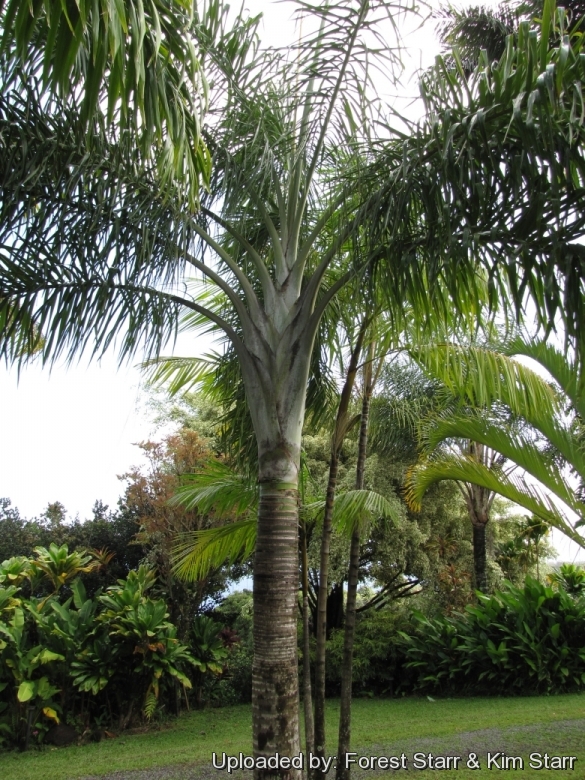 Origin and Habitat: Central, west and north west of Madagascar, between Miandrivazo and Antsiranana. At least 2,500 individuals are estimated to exist in the 34 currently recorded sites. It is cultivated as an ornamental in many tropical countries. Locally it has become naturalized, e.g. in Panama and in French Polynesia.
Altitude range: The species is found from the coast of the Mozambique channel up to 1,100 m elevation in the western limit of the highlands.
Habitat: Moist rainforest and semi-deciduous forest. It can be found in drier forest than most other Dypsis species, even in gullies and ravines in dry bushland. Although rare in its habitat it is widespread and the total population consists of several thousand individuals. There is habitat loss due to expanding agriculture, and increasing frequency of fires. The plants are also used for a variety of purposes which often involves harvesting the whole plant. Seeds are collected for the international horticultural markets.
Ecology: The fruits of Dypsis madagascariensis are eaten by lemurs, which disperse the seeds.

Description: Dypsis madagascariensis is a very handsome, medium sized, clumping (usually just 2-4 trunks) or solitary palm (which was known as Dypsis lucubensis). It is remarkable for its great height and slender appearance.
Crown shaft: Green to white waxy.
Trunk: Thick, grey closely ringed (Bamboo-like), with rings on stem not conspicuous, to about 15-18 m tall (but often less in cultivation) and15-30 cm in diameter.
Crown: With tristichous (three ranked) leaf arrangement, sort of like a triangle palm (see: Dypsis decaryi). Leaves (fronds) 7 to 12.
Leaves: Pinnate, plumose; sheath up to 65 cm long, petiole up to 40 cm long, rachis 1,60–3 m long; leaflets, green, about 80-130 (or more) on each side of the rachis, in in whorls of 2 to 6 ,40-100 cm long with drooping tips.
Inflorescence Between the leaves, slender, branched to 3 orders, arching; 90-150 cm long and green, with both male and female flowers. Flowers very small, unisexual, in groups of 3; male flowers globose with 6 stamens and a rudimentary pistil; female flowers ovate.with superior, apparently 1-celled ovary and rudimentary stamens.
Flowering: From May to June.
Fruit: Oval to ellipsoid drupe 1-2 cm long 0,5-1 cm in diameter.
Seed: 1-1,2 cm long, endosperm uniform. 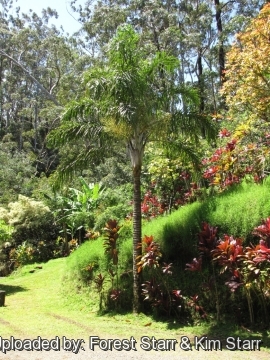 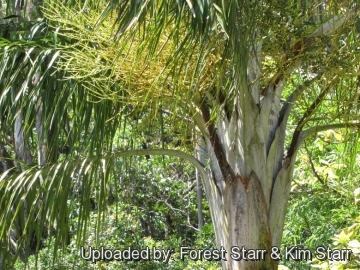 Cultivation and Propagation: This is an excellent palm adapt to tropical and subtropical climates, that does well in cultivation. It is little slow to take off but once established will grow quite fast.
Soil requirements: It prefers well-drained fertile, soils except those that are constantly soggy. However it is widely adaptable and can even thrives in poor soils, but do better when grown in nutrient-rich soils with regular watering.
Watering: It prefers moist soils (not saturated). This palm a will tolerate occasional dryness if not prolonged. Don't let sit in water.
Light: It adapts well to full sun or half sun. If home-grown, give some sun as with most tropical palms.
Fertilization: Need a perfect fertilizer diet including all micro nutrients and trace elements. It is subject to potassium deficiency.
Aerosol salt tolerance: It is moderately salt tolerant, but does a lot better inland then it does on the coast.
Hardiness: USDA Zones 10-12. Minimum Tolerated Temperature is about 1° C.
Wind hardiness: It can tolerate sweltering heat and moderately windy conditions.
Propagation: The seeds germinate easily when fresh.. If not properly treated, the seed does not have long shelf life. It produces offsets, and these can be cut off, when mature enough, as a propagation method.
Ornamental use: It is grown as an ornamental plant in gardens in tropical and subtropical regions, and elsewhere indoors. For its clustering growth habit, primarily is used as a specimen plant in garden and parks.
Traditional uses: The wood is very hard because of an outer layer of tough fibres and in Madagascar it is commonly used for floorboards of houses.
Food uses: The palm heart is an excellent vegetable and the fruits are edible.
Disease & Pests: It is quite resistant to pests but may require regular fertilization to prevent yellowing caused by potassium deficiencies; protect against frost.