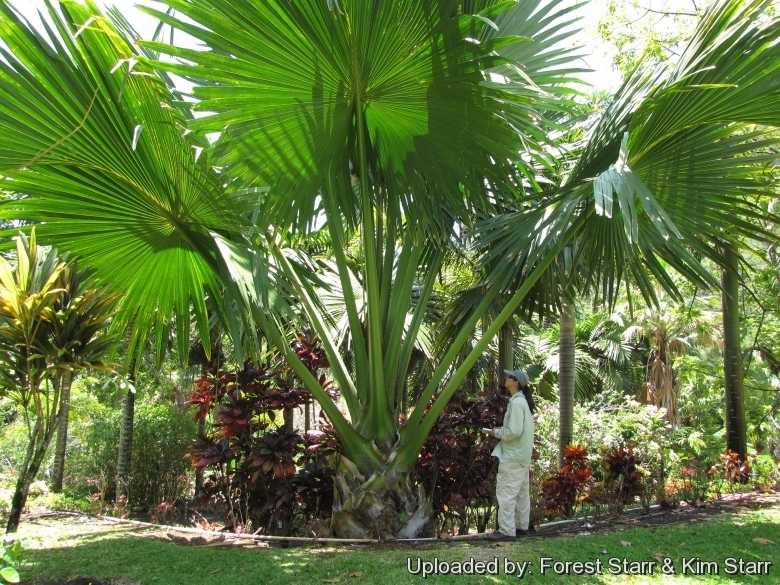 Origin and Habitat: Corypha umbraculifera, is restricted to Karnataka and the Malabar coast of Kerala ( eastern and southern India) and Sri Lanka. It is also reportedly naturalized in Cambodia, Myanmar (Burma), Thailand and the Andaman Islands. It is difficult to distinguish between wild and semi-wild subpopulations and the range of this species has been greatly influenced by humans, and possibly it is always cultivated. It is widely planted in other parts of out of its area of origin and cultivated as ornamental elsewhere in humid tropical countries.
Habitat and Ecology: It grows in low-lying areas of moist forest, often near the sea and in disturbed places.

Description: Corypha umbraculifera, the talipot palm, is one of the largest fan palms (Arecaceae tribe Corypheae). It attains to a great height and is surmounted by many large palmated plaited leaves up to 5 or more metres across, borne on a commensurately massive spiny stalk some 4-5 m long, and weighting up to 50 kg. A single one of these leaves can serve as an umbrella for many people at once, and is perhaps the reason for the specific epithet ‘umbraculifera’ The talipot palm is monocarpic, only flowers just before it dies, and bears the largest inflorescence of any plant, consisting of one to 24 million small flowers at the top of the trunk on a mature palm 20 m tall. Such a structure does not come without a price. The talipot palm lives 30 to 80 years in celibacy, all the while building up the necessary reserves for the one big spectacular flowering event. After a mortally exhausting output of blossom and fruit, the Talipot dies.
Stems: Solitary, to 25 m tall and 1-1.3 m in diameter, without spiral furrows.
Leaves: Large, palmate up to 5(-8) m in diameter. Petioles green, up to 4(-5) m long, without white hairs, the bases with 2 conspicuous earlike flaps. Blades spherical in outline, divided into 80-110(-130) stiff leaflets, with threads interposed between the segments.
Inflorescences: Gigantic, 6-8 metres tall, at the top of the trunk, branched 4-5 orders. Individual inflorescences emerging through splits in the subtending leaf sheaths. Note that the leaves under the inflorescence starts to droop and die.
Fruits: It takes about a year for the fruit to mature, producing thousands of globose, fruit 3-4 cm in diameter, yellow-green to greenish brown each containing a single seed. The plant dies after fruiting.

Notes: The titan arum, Amorphophallus titanum, from the family Araceae, has the largest unbranched inflorescence, and the species Rafflesia arnoldii has the world's largest single flower, but even these two pale in comparison to the sheer magnificence of the extravaganza that is the Talipot palm’s inflorescence. 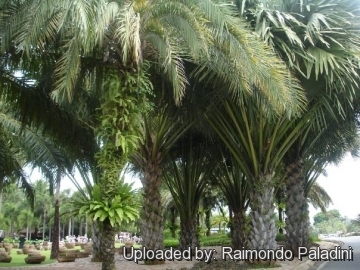 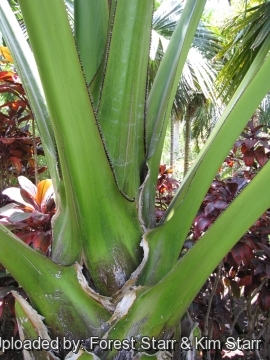 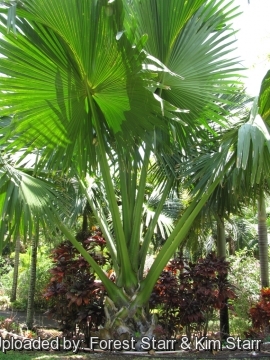 Cultivation and Propagation: Corypha umbraculifera is relatively easy to grow in sunny position and very adaptable to moist, but well drained soil type. Needs considerable space.
Growth rate: Very slow growing but growth is is somewhat enhanced at hight temperature if it is kept watered and fertilized.
Soils: It is adaptable several neutral pH soil type.
Fertilization: Need a perfect fertilizer diet including all micro nutrients and trace elements or slow release fertilizer, but particularly it is needs plentiful of magnesium. If it doesn't get enough magnesium, the leaves take on a rather unhealthy yellow colour.
Light: Prefers full sun.
Hardiness: USDA zone 10A –11. It can be difficult to get it to look its best without a great amount of heat and sun and so it is only really suited to the tropics in frost-free regions.
Drought tolerance:This palms like to be sparingly watered and is somewhat drought tolerant. During the summer or warmer months, water frequently to keep the soil from drying out. It need also elevated summer humidity, a dry atmosphere can be detrimental. Will not tolerate dry climate.
Remarks: Few people are aware of just how large this palm can get, and one often sees it planted in places where its going to cause real problems later on.
Aerosol salt tolerance: It is moderately salt tolerant, but does a lot better inland then it does on the coast.
Maintenance: Prune diseased, damaged or drying fronds, but do not prune if the frond still has some green colour. Palms recycle nutrients from dead or dying fronds and use them for healthier fronds. Palms only have a set number of new leaves that can sprout and grow per year and removing fronds will not increase that number. If you cut off more than what will grow annually, you could be left with a pretty bare and bald Palm.
Propagation: Fresh seeds germinate quickly within a month of being planted and the seedlings are attractive.
Use: Its very neat appearance and stature makes it perfect near highways and used to accent residential landscapes. A shade screen patio will provide an excellent environment for young specimens which can eventually be planted in a sunny location.