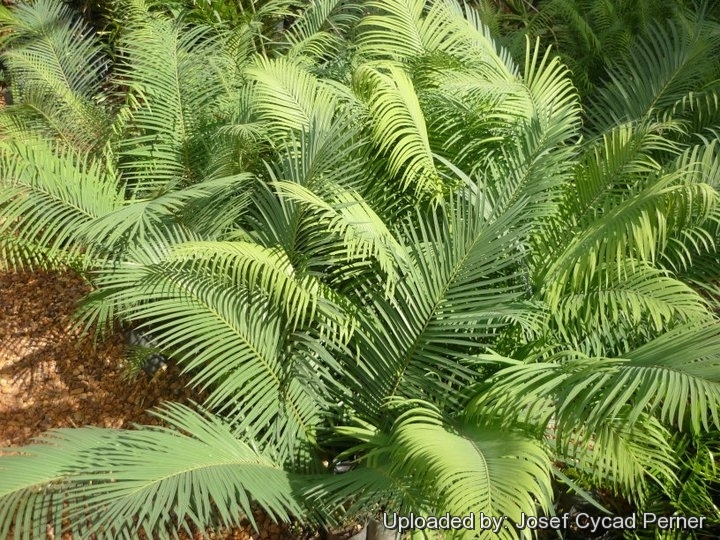 Origin and Habitat: Cycas guizhouensis is known from the Nanpan and Qingshui valleys in southwestern Guizhou province and also in eastern Yunnan and northwestern Guangxi provinces of China.
Altitude range: 400 to 1,300 metres above sea level.
Habitat and Ecology: Plants of Cycas guizhouensis grow separately or in clumps, typical in low, scrubby forests on steep slopes on limestone bluffs or screes and is also widespread on steep and almost inaccessable limestone mountains. Plants are also found in gravel soil in steep river valleys. Cycas guizhouensis grows in places where it is rainy, moist and cool in the summer and moist and frost-free in the winter. The annual climate consists of summer wet and winter dry season.
Now this species has decreased dramatically in numbers, and has even become extinct in some easily accessible locations. Deforestation is widespread in the region and the cycads often survive only on almost inaccessible limestone mountains. Large trees are also rare but occasionally spectacular specimen trees are seen in and around villages. Number of mature individuals 10000-12000. This species is also threatened by over-collection for food, medicine and use as an ornamental plant. During China's Cultural Revolution this cycad was eaten as a famine food by the local minorities. Because of its long life?cycle (generation length 40years), the seed and germplasm collections in botanical gardens or other institutions should be of practical value for the conservation of genetic diversity in C. guizhouensis.

Description: Cycas guizhouensis is one of a number of endemic cycads that have been described from southern China in recent years. It is a fast growing arborescent to acaulescent long?lived, species but overall rather small (less than 1 metre tall), with flat, shiny green leaves and narrow leaflets. Cycads are dioecious (have distinct male or female cone-bearing plants) and pollen needs to be transported from male to female cones on separate plants for pollination, and subsequent fertilisation and seed production, to occur.
Distinguishing features: This species has moderately keeled fronds with narrow leaflets distinctly twisted on the rachis and petiole usually not wholly spinescent. The pollen cones are soft and quite large. The seeds have a loose, freely peeling sarcotesta lacking a fibrous layer and rugose sculpting of the sclerotesta.
Derivation of specific name: The specific epithet guizhouensis refers to the place of origin, the Guizhou province of China, with the Latin termination ensis, place of origin.
Stems: Cylindrical very short to 1 m tall, 10-15 cm in diameter.
Leaves: 5-20 leaves in crown, 1-pinnate, 100-180 cm long, flat to slightly keeled. Petiole 30-60 cm long, petiole glabrous, more or less spiny. Leaflets 110-210, up to 160-370 mm long, 8-12 mm wide, deep green, semiglossy, at first with orange fuzz shedding as leaf expands. Basal leaflets not gradually reducing to spines. Margins flat, or slightly recurved. Apex acute but not stiff.
Cataphylls: The cataphylls (Modified leaf, much reduced and thickened, serving to protect the apical meristem in cycads produced in flushes preceding the emergence of cones or leaves.) are narrowly triangular, soft, hairy, 50-80 mm long, persistent.
Male cones: Spindle-shaped, orange to pale brown, 20-40 cm long, 6-14 cm across.
Female spike: When female inflorescences are present, the genus Cycas can easily be recognized by the loose structure of the inflorescence, as in all the other cycads genera the female inflorescences are compact cones. Instead Cycas guizhouensis carry ovules and seeds on fleshy, leaf-like megasporophylls 10-20 cm long, yellow-tomentose or brown-tomentose. Ovules 4-8, glabrous; lamina globose, 60-70 mm long, 60-80 mm wide, deeply pectinate, with 17-33 soft lateral spines 20-45 mm long, 2-4 mm wide, apical spine distinct from lateral spines, 25-45 mm long, 9-17 mm wide at base.
Seeds: Spherical or near so, 23-29 mm long, 22-28 mm wide; sarcotesta yellow, not pruinose, 1.5 mm thick.
Taxonomy note: When described this species was contrasted with Cycas pectinata, although its affinities are actually with the group of Chinese cycads that includes Cycas balansae and Cycas taiwaniana. Considerable confusion has been caused by the inclusion of Cycas szechuanensis as a synonym, and then the listing of the latter separately.

Notes: Cycads represent a very primitive group of vascular plants that have been in existence for more than 200 million years. Their origins can be dated to the low Permian , they were most diverse and widely dispersed in the Mesozoic era, and they were important components in the vegetation of the Triassic and Jurassic. Since then, they have been in decline and today they have only a relict distribution in tropical and subtropical regions.

Cultivation and Propagation: Cycas guizhouensis is rather small Cycad that will do well in temperate and subtropical climates which have a seasonally dry climate and can take very light frosts (if very dry). It is easy to grow, tolerating dry periods, but still very rare in cultivation.
Growth rate: it is a fast growing species. Because of its growth habit, fertilize only when terminal bud begins to swell, indicating the start of the annual growth cycle.
Exposure: It prefers bright light exposure but colour bleaches when in full sun; best with some protection from afternoon heat.
Soil: Needs a well drained spot, with deep soil, but will still thrive well even on on poor soils.
Maintenance: Minimal; removal of offsets if desired, removal of spent fronds.
Use: Landscape as cultivated perennial in warm, coastal areas; House-plant or interior-scape, as container plant in cool areas, as well very well suited to bonsai culture.
Propagation: Seed. The seed can take several month to germinate. After fertile seeds are collected, they usually need several months of storage before the inner embryo is ready to germinate. Therefore, it is best to clean the seeds of external fruit and set them aside before attempting to propagate the seeds.