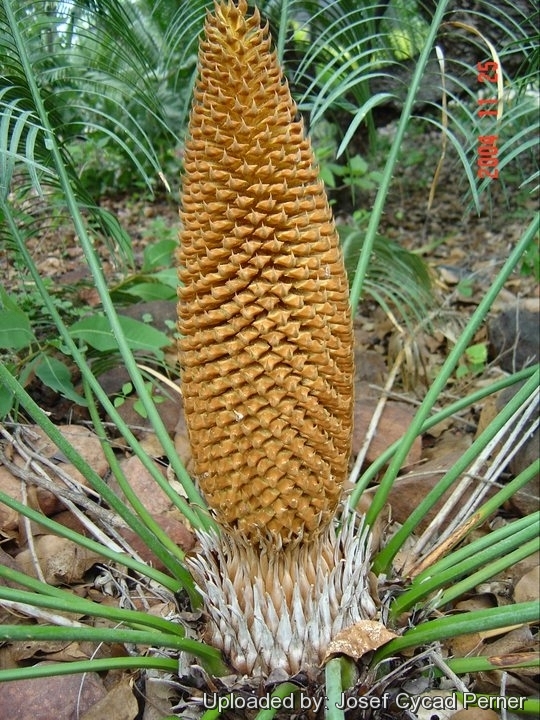 Cycas media Photo by: Josef Cycad Perner
Male cone. The young microsporophylls are fleshy and covered with coloured hairs, but at maturity they become hard and woody. The distal part of the microsporophyll is wedge shaped and expanded. The tip of the distal part is pointed and curved upward.

Origin and Habitat: Cycas media occurs from around Cardwell and then southwards to around St Lawrence close to the east coast of Queensland, with scattered occurrences also in northern Northern Territory and Western Australia, Australia, as well as on some offshore islands, and New Guinea. It is locally abundant.
Altitude range: Recorded from sea level up to about 1000 metres.
Habitat and Ecology: This subspecies is locally abundant in open or closed coastal eucalypt forests and sclerophyll woodlands (monsoon forest and vine thickets) on rocky hillsides and gullies up onto the ridges in sunny situations, mostly in seasonally dry tropical sites that offer good soil drainage, often on sandy soils and on sloping sites or occasionally in rainforest in eastern Queensland. Cycas media is the host plant for the caterpillars of the butterfly Theclinesthes onycha. It is tolerant of bushfire and often re-foliates immediately following a dry season fire, before the beginning of the next rainy season. Although it has declined due to habitat clearing for pastures for cattle, it remains very abundant throughout its range.

Description: Cycas media is a is a palm-like cone-bearing plant similar in shape to Cycas circinalis. It produces a single stem that grows to an average height of tallest specimens about of about 3-3.5 m tall and 30-60 cm in diameter (rarely up to six metre tall). It does not sucker but may branch with age or if it becomes damaged. Its leaves are numerous, up to 1.8 m in length with glossy, light- green to dark blue- green leathery, thick leaflets 6-8 mm wide and grow in annual flushes from a massive apical bud. Cycas media grows over a large range and because of this it displays considerable geographical variability which allows three subspecies to be recognized: C. media ssp. media, C. media ssp. banksii and C. media ssp. ensata which are all assessed separately.
Cycas media subsp. media:
Derivation of specific name: From the Latin media middle, possibly referring to the morphologically intermediate form of this species.
Stem: Up to 2.7-3,5, but seldom attaining 6 metres in height, diameter 30-64 cm (10-18 cm at narrowest point) and usually unbranched, rather squat and thick.
Roots: Taproot thick and swollen, carrot-like (Daucus carota). Coralloid roots present and sections of these roots reveal congregations of blue-green algae.
Leaves (fronds): 42 to 45, pinnately divided, 70-180 cm long. Leaflets 45 to 150 pairs (or more), median leaflets 13-21(-35) cm long, 6-8 mm wide and subtend quite a high angle (140-180°) with the compound leaf rhachis. Leaflets, bright green or deep green, highly glossy or semiglossy above and yellow green beneath, pointed, flat, with a prominent midrib or flat (not keeled) in section, margins revolute. Yong leaves with orange tomentum shedding as leaf expands. Basal leaflets not gradually reducing to spines, 7-15 cm long. Rachis flattened above, squarish or round when viewed at cut end. Leaf petiole 30-70 cm long (20-30% of total leaf), glabrous or pubescent, with 5 to 7 short sharp spines on each side below the basal leaflet, approximately 2.5-3 cm long.
Cataphylls: The cataphylls (Modified leaf, much reduced and thickened, serving to protect the apical meristem in cycads produced in flushes preceding the emergence of cones or leaves.) are about 3, 60-90 mm long, clothed in rusty brown hairs and persistent.
Seeds: 34-39 mm long, 32--35 mm wide.
Male cones: Ovoid cone, about 15-25 x 8-15 cm in diameter. The young microsporophylls are fleshy and covered with coloured unicellular trichomes or ramenta, but at maturity they become hard and woody. The distal part of the microsporophyll is wedge shape and expanded. The tip of the distal part is pointed and curved upward; apical spine prominent, sharply upturned, 6-10 mm long. The proximal end of the microsporophyll is narrow and stalk like, attached to the cone axis. The distal most part and the proximal part of the sporophyll are sterile while the middle surface of abaxial side is covered with microsporangia, fertile zone 16-22 mm long, sterile apex 8-11 mm long, deflexed. The number of sporangia in Cycas media is up to1160 in. Sporangia are arranged in groups of 2-5 forming a sorus, in Zamia there may be only one sporangium on a sorus. The sorus consists of a central papillae like structure the placenta to which are arranged sporangia which are protected by long multicellular hairs.
Megasporophylls: Like other Cycas species, the female plants do not bear cones; instead they carry ovules and seeds on grey-tomentose or brown-tomentose megasporophylls that are leaflike pinnate structures ending with a subulate point that bear lateral ovules on the margins of the lamina with the micropyles of the ovules directed away from the axis of the sporophyll. Number of megasporophylls from crown about 40. Number of ovules about 200 which average (1-)2-6(-10) per sporophyll. Length of sporophyll about 20-37 cm. Lamina ovate to lanceolate, about 3.5-10 cm long, 1.7-3 cm wide, regularly dentate, with 18-32 pungent lateral spines 4-10 mm long, 1-3 mm wide, apical spine distinct from lateral spines, 15-45 mm long. Ovules glabrous.
Seeds: Fruit or seed-bearing structures densely clothed in tortuous pale brown hairs and drawn out into a long spine at the apex. Seeds ovate or flattened-ovoid, slightly angulated, 30-40 mm long and breadth 26-32 mm, with a fleshy sarcotesta about 3-4 mm thick green but yellow or orange-brown when ripe, not pruinose. Testa or endocarp with a small indentation at one end.
Taxonomic notes: The names Cycas kennedyana and Cycas normanbyana have been widely applied to forms of C. media subsp. media, and also erroneously to two other Queensland species from south of the range of C. media. The distinctive characteristic of these 'taxa' occur at random through most populations of C. media subsp. media. This species is distinguished from other Australian cycas by the robust habit with a tall, stout trunk with persistent leaf bases and cataphylls, the long, hard, strongly pungent, shortly pubescent cataphylls, the glabrous, glossy green leaves with more or less flat leaflets, and the relatively small seeds. The similar Cycas silvestris has markedly broader leaflets and a smooth trunk, and the similar Cycas megacarpa has usually shorter, more strongly keeled leaves with fewer leaflets, larger seeds, soft, vilous cataphylls and a more slender trunk.

Subspecies, varieties, forms and cultivars of plants belonging to the Cycas media group

Notes: Although most Cycas are, palm-like evergreen plants, Cycas media and Cycas siamensis are said to be regularly deciduous in nature and lose all their leaves before a new flush develops. 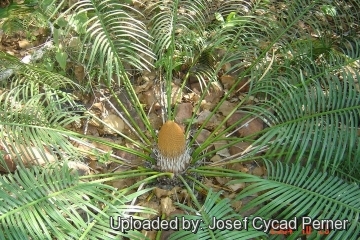 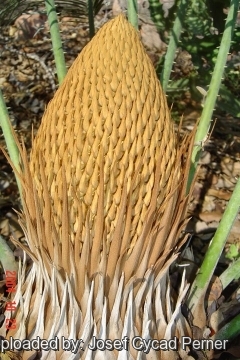 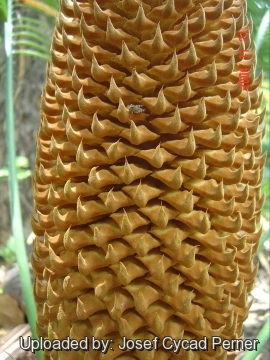 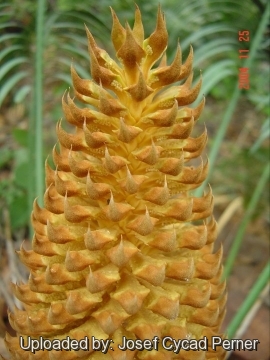 Cultivation and Propagation: Cycas media is a very hardy plant, commonly planted in gardens or rockeries. It is suited to tropical regions which have a seasonally dry climate. It is easy to grow, tolerating dry periods.
Growth rate: Usually slow growing, however good conditions can speed it up considerably. Because of its growth habit, fertilize only when terminal bud begins to swell, indicating the start of the annual growth cycle.
Exposure: It prefers bright light exposure but colour bleaches when in full sun; best with some protection from afternoon heat.
Soil: Needs a well drained spot, with deep soil, but will still thrive in less than ideal conditions.
Maintenance: Minimal; removal of offsets if desired, removal of spent fronds.
Use: Landscape as cultivated perennial in warm, coastal areas; House-plant or interior-scape, as container plant in cool areas, as well very well suited to bonsai culture.
Traditional uses: Treated nuts of Cycas media and other species were a food source for Arnhemland and Cape York Aboriginal tribes (raw seeds are poisonous). The toxicity of cycads has long been known by natives, who have developed careful and extensive procedures to remove the poisonous substances from cycad plant products. Explorers and early settlers were frequently victims of the toxic effects of cycads as they experimented with these unfamiliar native foods. In 1770, members of Captain Cook's crew were reported to have become violently ill after consuming Cycas media nuts during their voyage to Australia. Outbreaks of cycad poisoning and heavy losses of livestock occurred in Australia between the 1880s and the 1930s as the rapid growth of the sheep and cattle industry led to the expansion of grazing into the natural habitat of cycads.
Propagation: Seed. After fertile seeds are collected, they usually need several months of storage before the inner embryo is ready to germinate. Therefore, it is best to clean the seeds of external fruit and set them aside before attempting to propagate the seeds.
Warning: All plant parts are considered highly toxic.