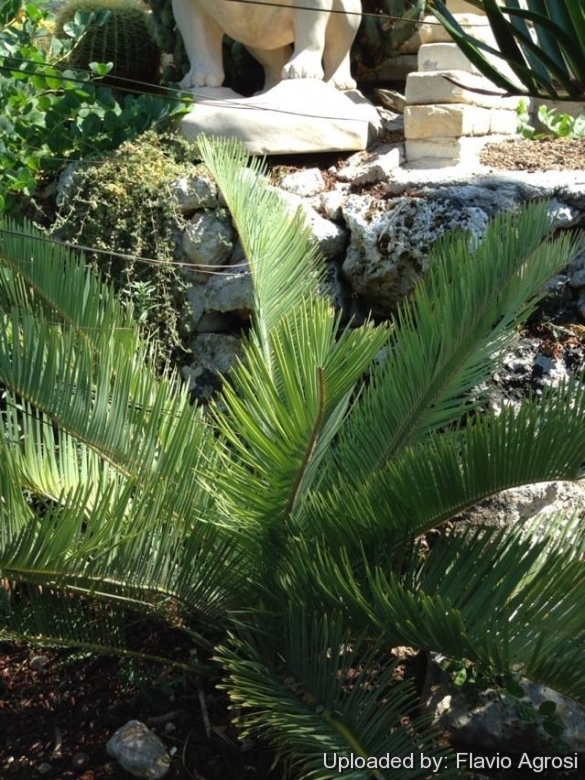 Origin and Habitat: Encephalartos friderici-guilielmi occurs in the Eastern Cape province and KwaZulu-Natal province of South Africa.The main distribution area is in the Cathcart and Queenstown districts. Smaller subpopulations occur to the north of Umtata and in the vicinity of Kokstad on the border between the Eastern Cape and KwaZulu-Natal. Although widespread and still relatively abundant, populations have declined in the past 90 years.
Altitude range: 700 up to 1,400 metres above sea level.
Habitat and Ecology: This species occurs in montane grassland and open shrubland on rocky ridges. The temperatures range from very high in summer to very low in winter with frost and snow occurring. Rainfall occurs in summer, ranging from 375 to 500 mm a year. E. friderici-guilielmi is subject to regular fires, but there is little evidence of significant damage being done to the mature plants. Their stems and crown are able to withstand severe scorching and only the leaves burn. Mature plants are generally found amongst rocks which obviously protected them from fires when young. Young plants not protected by rocky outcrops are vulnerable. This species is threatened due to over-collecting for ornamental purposes and as a result of traditional muthi (medicine) harvesting.

Description: Encephalartos friderici-guilielmi is a medium/large arborescent cycad with slightly erect fronds, but often spreading lower than crown when stem has cones. This species can produce more cones than any other species of Encephalartos. Adult plants may develop up to six stems and sucker freely from the base. E. friderici guilielmi has been confused for almost 100 years with Encephalartos cycadifolius, but it is a distinct species with a spreading crown of stiff leaves with usually longer and broader leaflets, and abundance of thick wool in the crown. Stems are also longer, and cones more in number.
Derivation of specific name: The species' name honours Friedrich Wilhelm (latinised to friderici guilielmi), 19th century King of Prussia, who was a patron of botany.
Stem: Unbranched or branched from the base, stout, up to about 4 m tall and (35-)40-60 cm in diameter, eventually leaning and eventually settling flat on the ground with the crown curved upwards. Crown open densely covered in loose brown wool, particularly when new leaves and cones are produced.
Cataphylls (scale leaves): Linear-lanceolate, up to 14 cm long, densely woolly on outer surface.
Leaves: 100-150 cm long, tendong to spread out horizontally when the cones appear, somewhat glaucous blue or silver to blue green when young, darkening as they age, strongly keeled (opposing leaflets inserted at 60-100° on rachis). Rachis green, straight or recurved, fairly stiff, not spirally twisted. Petiole straight, with no prickles bout 30 cm long. Leaf-base collar not present; basal leaflets reducing to spines. Leaflets linear, weakly discolorous, closely spaced and overlapping upwards, not lobed, in V disposition (insertion angle obtuse 45-80° or acute less than 45°), shortly narrowed to an amber, dark brown or black pungent apex; margins flat; upper margin entire (no teeth); lower margin lightly toothed (1-3 teeth); median leaflets 10-18 cm long, 7-8 mm wide, with 7-9 prominent nerves on the lower surface, basal leaflets reduced in size, but not to prickles. Undersurface of rhachis and margins of leaflets loosely whitish woolly when young, glabrescent, with pulvinus persistently woolly.
Cones: Several together (up to 10 on large male stems) on short stout peduncles, and with a dense yellowish-grey to brownish woolly covering. As with all cycads E. friderici-guilielmi is dioecious, which means plants are either male or female. One must have both to produce viable seeds.
Pollen cones: 1-12, narrowly ovoid, yellow, 20-30(-40) cm long, (6-)7-8(-10) cm in diameter. Median scales about 25-28 mm long and 2 cm broad with beak projecting about 5 mm beyond sporangial margin and turned slightly upwards.
Seed cones: 1-6, ovoid to barrel-shaped, yellow, 25-30 cm long, 15-17(-20) cm diameter, remaining on the plant for more than six months before disintegrating to disperse the seeds. Median scales 4.5-5 cm long.
Seeds oblong: More or less oblong in outline with rounded apex, 25-30 mm long, 15-20 mm wide, sarcotesta yellow to pale orange-yellow, angled by compression.

Cultivation and Propagation: Encephalartos friderici-guilielmi is a very hardy species that experiences harsh growing conditions in its natural habitat with temperatures ranging from very high in summer to very low in winter with frost and snow occurring, but it is very adaptable to different climatic conditions. It is well suited to warm temperate and subtropical climates, and can handle frosts. With its bright foliage heightened by full sun is a commanding accent plant in the general landscape. It is partially drought tolerant and wind tolerant. As a garden plant, this cycad will usually hold one or two crowns of leaves, all in good condition. As a seedling, it often loses its previous year's leaves before the new leaves emerge. The seedlings need plenty of room for the tap root to develop and require very good drainage. Its colour makes it a good subject for the nightscape. Requires full sun, and very good drainage.
Growth rate: It is a long lived slow growing plant taking 15 to 20 years for one of these to produce a cone, so patience is a must. But it will grow faster and develops a stout stem given the best conditions.
Soils: It responds well to deep, fertile, slightly acidic, well drained, soil enriched with compost.
Waterings: In cultivation prefers plenty of water, especially in dry weather for optimal growth. But it is eventually drought resistant.
Fertilization: Naturally undemanding for nutrients, it responds very well to regular applications of fertilizer. Growth can be greatly improved through the application of fertilizers. Most growers find that a fertilizer having an even NPK (Nitrogen, Phosphorus, Potassium) balance, and supplemental trace elements, provides a good start for cycads.
Exposure: It will grow in sun or partial shade, however best results are obtained growing the seedlings in full sun.
Hardiness: They do best in a tropical or sub-tropical climate and should be kept totally dry in winter at or around 10°C but demonstrate a remarkable degree of cold resistance and may tolerate frost for short periods if dry, however heavy frosts would probably be fatal.
Pests and diseases: Pests encountered are scale mealy bugs, caterpillars and snout beetles.
Propagation: Plants are not readily available from nurseries, however they are also easy to propagate from seeds. To produce true to type seed it is necessary to hand pollinate the female cone with pollen harvested from a male cone of the same species. The seed is sown in the spring on a bed of clean, coarse sand which has bottom heat of 25-28º C. This species is slow to germinate and can take up to a year before all of the seed has germinated. They can also be propagated from suckers with some patience and experience. Early spring is an ideal time when all leaves are removed from the sucker which is then carefully eased away from the main stem. The sucker needs to be left to dry off the wound before planting in clean sand which encourages root development. Once well rooted, the sucker can be planted out in the open ground.