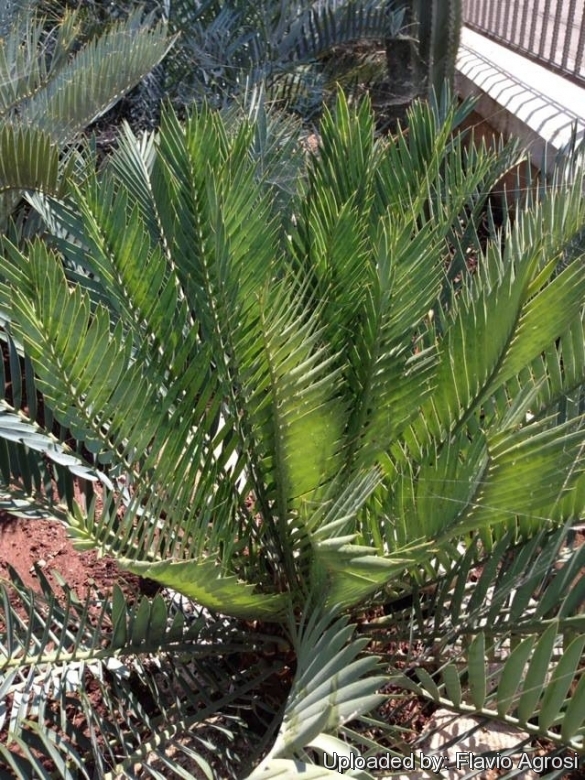 Origin and Habitat: Encephalartos princeps occurs in the catchment area of the Black Kei, the Great Kei and the Kubusi rivers in the Cathcart, Stutterheim and Komga areas of the Eastern Cape Province, South Africa. The species is known from six locations (Extent of occurrence is 1,870 km²) the overall population size is between 3,500 and 5,000 mature individuals and declining.
Altitude range: 200 to 800 metres above sea level.
Habitat and Ecology: Encephalartos princeps is a lithophytic plant found growing in arid low succulent vegetation characterized by thick shrubs and grass with its roots often wedged into fissures on almost vertical rocky ridges and slopes. E. princeps occurs mainly on dolerite and rocky outcrops along river valley, in contrast to the very similar Encephalartos lehmannii, occurring on sandstone formations. Summers are hot and winters are severe. This species has adapted itself for dry conditions over the past millenniums. The thick coralloid roots and fleshy midribs are obviously an adaptation to serve as storage organs for the scarce moisture that is utilized in much the same way as the succulents that grow alongside. This species is threatened due to the illegal collecting of plants in the wild and as a result of habitat destruction due to expanding agricultural activities. In some populations, the ground is heavily infested by the invasive plant Lantana camara and control measures may impact on the cycad population.

Description: Encephalartos princeps is one of the most beautiful arborescent cycads from the genus Encephalartos with silver-blue leaves and a nice upright habit. The new leaves are silvery blue, while the mature leaves tends to become dull green, but without sufficient sun, they don't get the blue colouring. Temperature alone won't give the colour, bright sunlight is necessary for E. Princeps to get its colour.
Distinguishing characteristic: The entire, closely crowded and overlapping leaflets in a "V" formation distinguish this species from other blue-leaved species of the eastern Cape Province.
Derivation of specific name: The epithet “princeps” is derived from a Latin word that means "first" and probably refers to the fact that this species was the first in an evolutionary sequence leading eventually to Encephalartos horridus.
Stem: Up to 4(-7) m tall, 30-40 cm in diameter. Main stems produce numerous suckers from the base of the plant.
Roots: Coralloid (meaning coral-like) roots. These roots contain symbiotic cyanobacteria that fix gaseous nitrogen from the atmosphere and provide essential nitrogenous compounds to the plant. This can be a great advantage, as many cycads grow in nutrient-poor habitats.
Leaves (fronds): 100-130 cm long, blue or silver, dull, but as leaves age they will start to turn green. This is normal for most blue species. Leaves are strongly keeled (opposing leaflets inserted at 50-90° on rachis); rachis blue, straight with last third sharply recurved, not spirally twisted; petiole straight, with no prickles; leaf-base collar prominent; basal leaflets not reducing to spines. Leaflets are lanceolate, weakly discolorous, overlapping upwards, not lobed, in a "V" formation (insertion angle acute less than 45°); margins flat; upper margin entire (no teeth); lower margin entire (no teeth); median leaflets 15 cm long, 15 mm wide. This species like all the other blue-leaved species of the Cape Province have discolorous leaves with stomata on the undersurfaces only, in contrast to the blue-leaved species of Transvaal, which all have stomata on both surfaces of the leaflets.
Cones: 1-3 borne together. As with all cycads E. princeps is dioecious, which means plants are either male or female. One must have both to produce viable seeds.
Pollen cones: Ovoid, green, 20-25 cm long, 8-10 cm diam.
Seed cones: Ovoid, green, 30-40 cm long, 20-25 cm diam. Verrucose.
Seeds: Oblong, 35-40 mm long, 15-20 mm wide, sarcotesta red.
Similar species: E. princeps can be confused with Encephalartos lehmannii. Leaflets of E. lehmannii have more spacing between them. The cones of E. princeps are also different in that the colour is an olive green, where E. lehmanii are blackish-red to green. 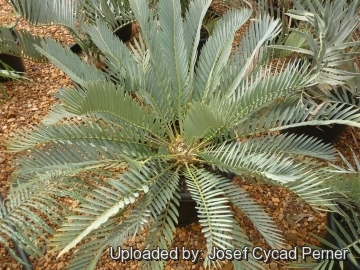 Cultivation and Propagation: Encephalartos princeps is an adaptable plant well suited to warm temperate and subtropical climates, and can handle light frosts. With its bright foliage heightened by full sun is a commanding accent plant in the general landscape and makes an excellent tubbed specimen It can be grown in full sun without its leaves burning. Its colour makes it a good subject for the nightscape. Its beauty and ease of horticulture make it one of the finest cycads for use in the garden. It is partially drought tolerant and wind tolerant. As a garden plant, this cycad will usually hold one or two crowns of leaves, all in good condition. As a seedling, it often loses its previous year's leaves before the new leaves emerge. The seedlings need plenty of room for the tap root to develop and require very good drainage.
Growth rate: It is a long lived slow growing plant taking 15 to 20 years for one of these to produce a cone, so patience is a must.
Soils: It responds well to deep, fertile, slightly acidic, well drained, soil enriched with compost.
Waterings: In cultivation prefers plenty of water, especially in dry weather for optimal growth. But it is eventually drought resistant.
Fertilization: Naturally undemanding for nutrients, it responds very well to regular applications of fertilizer. Growth can be greatly improved through the application of fertilizers. Most growers find that a fertilizer having an even NPK (Nitrogen, Phosphorus, Potassium) balance, and supplemental trace elements, provides a good start for cycads.
Exposure: It will grow in sun or partial shade, however best results are obtained growing the seedlings in full sun.
Hardiness: They do best in a tropical or sub-tropical climate and should be kept totally dry in winter at or around 10°C but demonstrate a remarkable degree of cold resistance and may tolerate light frost for short periods if dry, however heavy frosts would probably be fatal.
Propagation: Plants are not readily available from nurseries, however they are also easy to propagate from seeds. They can also be propagated from suckers with some patience and experience.