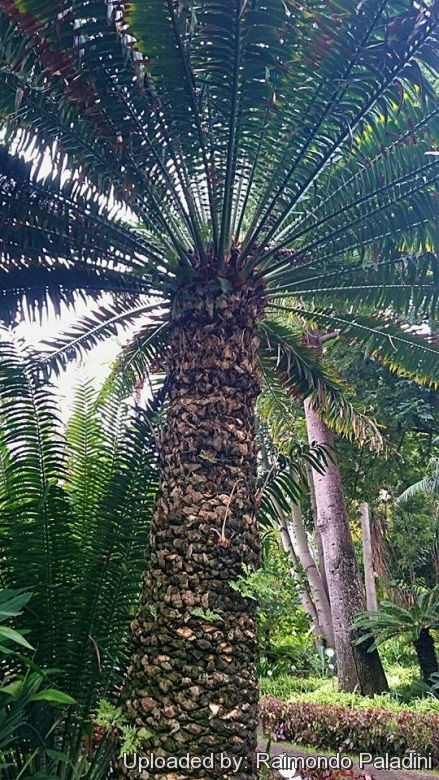 Encephalartos laurentianus Photo by: Raimondo Paladini
Botanical garden of Puerto de la Cruz, Tenerife. 03 febb. 2017. The trunk is over 50cm in diameter and the leaves are over 5 meters tall.

Origin and Habitat: Encephalartos laurentianus is known only from a small area on the Angola—Congo border. Populations are restricted to the Kwango (Cuango) River valley in the vicinity of Kasongo-Lunda in the Bandundu province of the DRC and in the Uige province in Angola. Plants are also found between the Fufu and Kikasu tributaries of the Kwango. It has been reported that 'large numbers' occur in the Kasongo-Linda districts of eastern DRC and that seed set is occurring.
Altitude range: This species occus between 450 and 550 metres above sea level.
Habitat and Ecology: E. laurentianus is found in closed, humid gallery forest along the river Kwango and on open red sandstone slopes above. The vegetation type in this area is Congolian forest-savanna mosaic. The species is targeted by collectors, but the area where it grows is considered impenetrable to outsiders, due to its remoteness and danger. 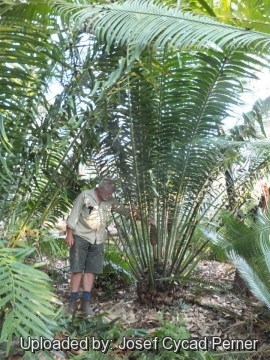 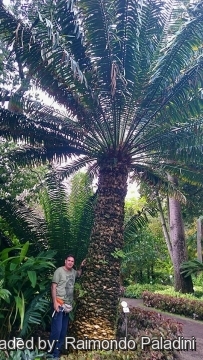 Encephalartos laurentianus at Botanical garden of Puerto de la Cruz, Tenerife. 03 febb. 2017. The trunk is over 50cm in diameter Photo by: Raimondo Paladini 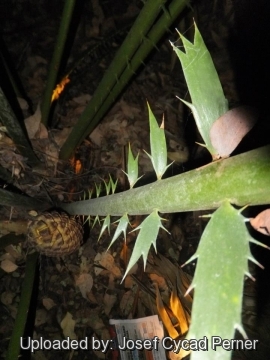 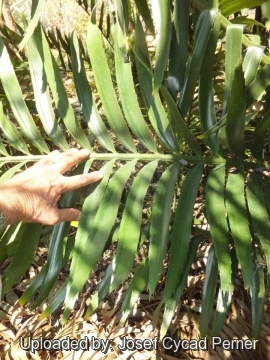 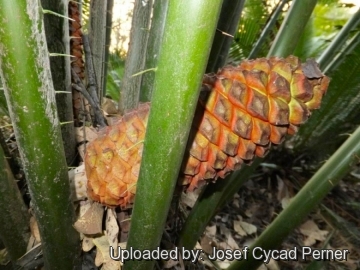 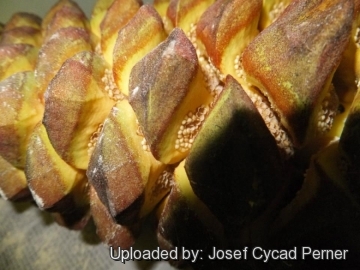 See the Pollen sac's that have ruptured, dehiscing the pollen, there are also un-ruptured sac's. Photo by: Josef Cycad Perner 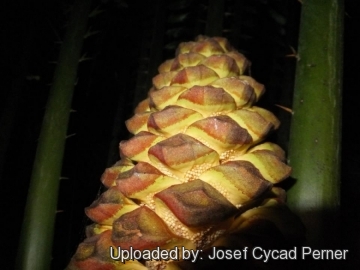 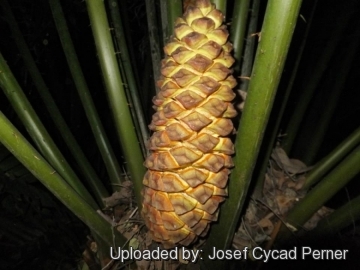 Cultivation and Propagation: Encephalartos laurentianus needs a moist, well-drained, frost-free position, in filtered sun. As a garden subject, it is one of the most spectacular of all cycad species and is quite adaptable in cultivation. Although slow-growing as a seedling, this plant grows rapidly once it is about three years old and responds well to cultivation provided it has a well-drained soil, frost-free conditions and regular watering during the dry months. It is an adaptable plant well suited to subtropical climates. It can be grown in full sun without its leaves burning. When young they can be grown as a container plant and eventually transplanted into the garden. As a garden plant, this cycad will usually hold two or three crowns of leaves, all in good condition. It is one of the larger species of Encephalartos and has excellent landscape potential if your garden can handle a larger plant.It likes lots of water in the growing season.
Growing rate: It is an extremely fast grower, putting out up to 5 flushes a year. The seedlings grow rapidly, developing into an attractive garden plant with 5 m long leaves in four to five years. Needs a large garden due to its size. It likes water and regular feeding and if it finds the right spot in the garden, will grow remarkably well. Seedlings can be a little slow to get started for the first couple of years if they are grown in containers which do not allow room for the tap root to develop.
Soils: It grows in all sorts of soil type, but prefer well drained, gritty soil with plenty of water, especially in dry weather.
Transplanting: This species transplants easily as a mature plant, although it is recommended to remove all of the leaves before doing so. This makes for easier handling and the plant will recover sooner due to less moisture loss.
Exposure: It thrives and grows best in filtered sun or partial shade. When grown in full sun, the leaves are a little shorter and less likely to be damaged by wind. The leaves of those plants grown in the shade can become stretched out and damage the caudex if they break off close to their base.
Waterings: In cultivation prefers moist soil with good drainage for optimal growth. But it is eventually drought resistant. Irrigation systems can be detrimental to cycads, damaging the leaves and stems from the pressure of the water as well as over-watering.
Fertilization: Naturally undemanding for nutrients, it responds very well to regular applications of fertilizer. Growth can be greatly improved through the application of fertilizers. Most growers find that a fertilizer having an even NPK (Nitrogen, Phosphorus, Potassium) balance, and supplemental trace elements, provides a good start for cycads.
Wind tolerance: It prefers a sheltered position providing protection from the prevailing winds.
Hardiness: Frost sensitive (USDA zones 10-12) .
Propagation: It may be propagated by seeds. They are among the easiest plants to germinate, but appears to need shade for successful germination. It is sown on a bed of clean coarse sand which has a bottom heat of 25-28°C. The seeds are pushed into the sand so as that they are level with the surface of the sand. Water each day and within two months the seeds begin to germinate by producing a root followed by leaves. Within10 months the seedlings are removed and potted into a 3 litre plastic sleeve containing a well-drained growing medium which contains some agricultural lime. Within a year these seedlings need to be repotted into 30 cm pots to encourage the plants to develop. Keeping encephalartos in small containers prevents them from growing. Once in the open ground they develop well.
Known hazards: Many members of the Zamiaceae are poisonous, producing toxic glycosides known as cycasins, one should use gloves when handling or cleaning them.