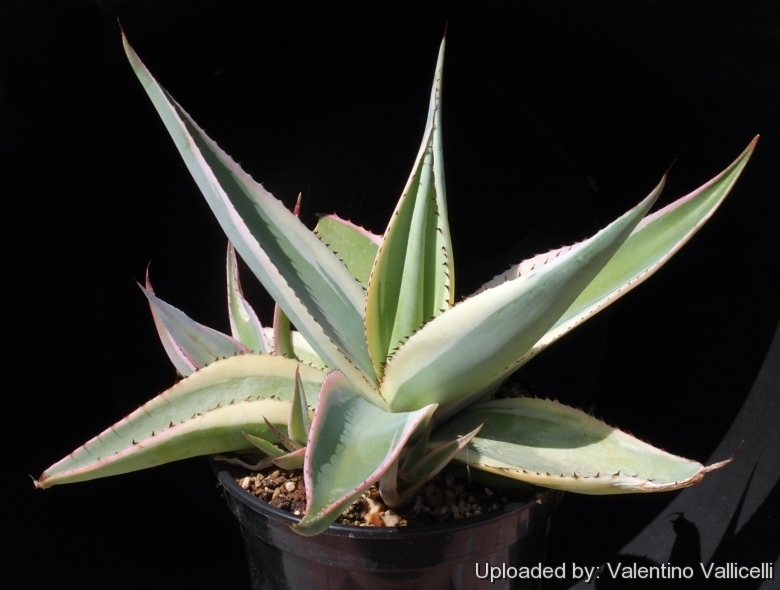 Description: Agave guiengola is a fairly fast growing agave with few soft succulent leaves. It’s uniquely shaped, silvery-bluish leaves makes it a very unique statement in the landscape and it is considered by some collectors to be the most spectacular large agave because of its sculptural form. Plants in habitat are mostly single while the more common cultivated clones sucker profusely.
Rosettes: 90-120 cm. tall by 120-180 cm. acaulescent, with few spreading open leaves ( ca. 25 to 30 leaves at maturity) that lay more horizontally than most Agaves.
Leaves: Thick, ghostly-pale, glaucous, very broad at the base ovate to ovate lanceolate and taper to brown terminal spines. Nearly plane above and narrowly channelled apically. Along the edge of the 30-55 cm long leaves there are few to many dark-colored variously serrated teeth (this is a variable trait) The teeth alternate in size between small and large ones along the leaf margins. There is also some variation in leaf size and colour.
Inflorescence: When mature this plant produces a 150-200 cm spike flowering from near the base.
Flowers: Yellow inconspicuous, 33-35 mm long, almost tubeless with distinct tepals and the insertion of the ﬁlaments at the base. The flowers attract hummingbirds.
Blooming season: Spring to summer. Typically it flower only at maturitv once every 15-25 years and the main crown dies after blooming.
Fruit: Capsules 22-24 mm long, oblong, thin walled.
Variegated form: The very attractive variegated type, formerly sold in the trade under the name Agave guiengola 'Marginata', was discovered by California agave specialist, Kelly Griffin. Since the name “Marginata” has been invalid on plants named after 1959 it has been chosen the cultivar name “Creme Brulee”. This form has bluish-green leaves surrounded by a 1-2,5 cm border of creamy white to butter cream yellow that takes a nice pink hue under cold and sunny conditions. Tiny but sharp, dark brown spines line the leaf margins, culminating in a longer terminal spine. ‘Cream Brulee' produces variegated offsets with very narrow leaves. This variant makes an exceptionally beautiful, if somewhat formal, landscape statement. The variegated form is about 25 percent smaller than the normal one.

Subspecies, varieties, forms and cultivars of plants belonging to the Agave guiengola group 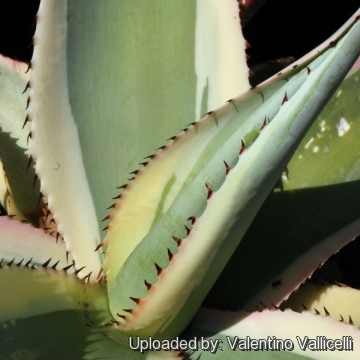 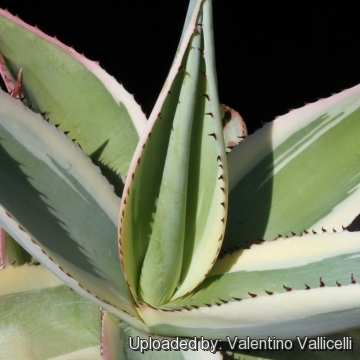 Cultivation and Propagation: There's no difference in cultivation from usual plants of this type. Though it grows more slowly. This is one of the few Agaves that might do best in some shade as the leaves tend to burn in hot blazing sun. It likes regular water but don't soak it wet as it seems to suffer from edema from over watering (They enjoy a little water during winter period too). It's also somewhat cold sensitive, protect from freezing temperatures to avoid disfiguring the foliage.
Propagation: Offsets (New plants are freely produced basally between the leaves) Plants in cultivation sucker or produce offsets profusely (while plants in habitat usually stay solitary), but as it ages, offsets become fewer and fewer.