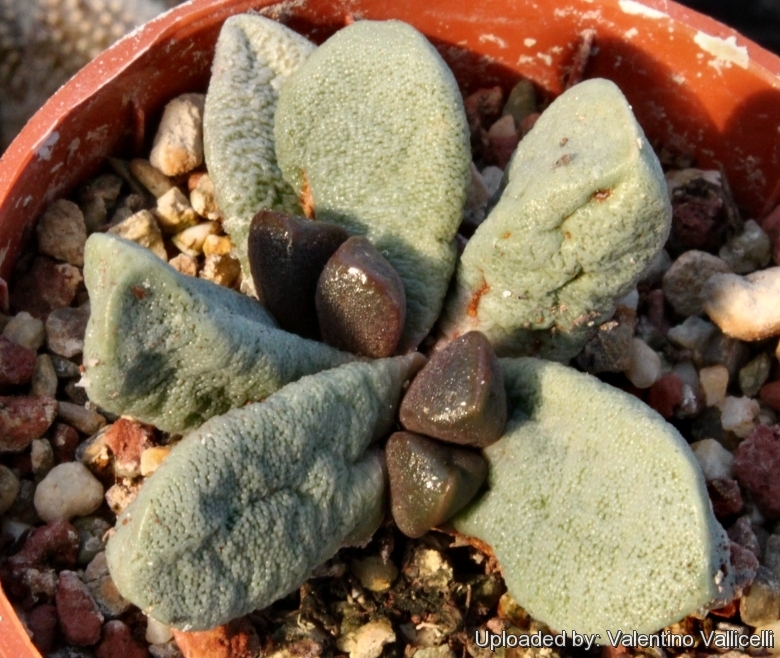 Psammophora herrei Photo by: Valentino Vallicelli
The new growing leaves at the center of the rosettes are very stiky.

Origin and Habitat: Cape-Province: Little Namaqualand. (South Africa)
Type locality: Vicinity of Swartwater in the Richtersveld.
Habitat: They grow on gravelly soils in subtropical or tropical dry shrub-land in a very dry area characterized by unpredictable but rainfalls. In habitat Psammophora often rely solely on the fog and dew for their moisture requirements.

Description: Psammophora longifolia is a small succulent-leafed shrub. These are plants that have on their leaves a sticky substance that traps sand particles, which in turn protect the plant from the heat of the sun. Psammophora herrei is related to Psammophora longifolia, but its leaves are shorter and thicker than those of the latter.
Stem: Very short usually buried in the soil.
Leaves: 3-sided, acute, glaucous grey-green, rough with the keel rounded and the base. The new growing leaves are very sticky and often flushed with pink or purple.
Flowers: On long stalks, violet.
Blooming season: Winter.

Subspecies, varieties, forms and cultivars of plants belonging to the Psammophora longifolia group

Notes: The particularity of this plant is that sand particles adhere to the sticky leaves in great quantity, forming a secondary protective layer over leaf surface (probably with heat-reducing function, moreover the layer of sand shelters the leaves against the destructive force of high sand blasting winds). 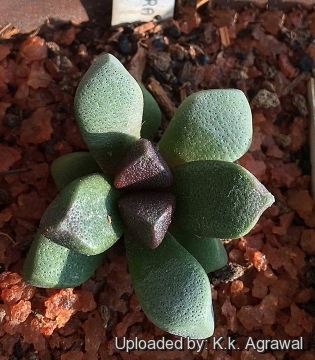 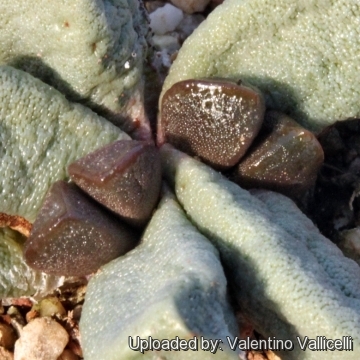 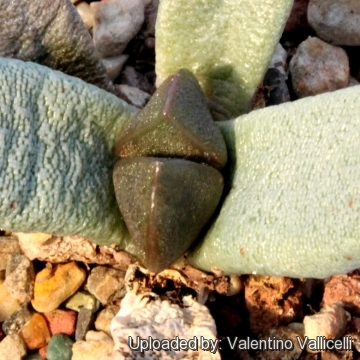 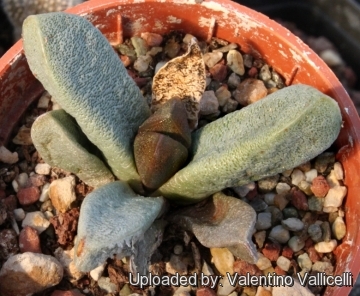 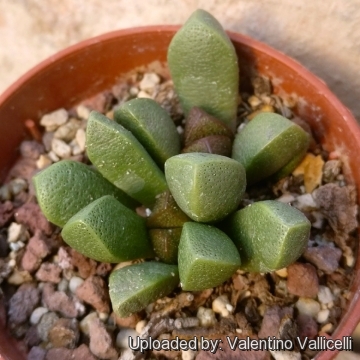 Psammophora herrei Photo by: Valentino Vallicelli
Send a photo of this plant.

Cultivation and Propagation: Psammophora grow on a varied rainfall period, but in cultivation they do very well with the fall-winter growing period during which they are watered not too frequently and heads for summer dormancy. Psammophora are tricky plants that are very particular about their growing conditions and require the right maintenance in order to keep happy. They are notoriously difficult to grow because they rot easily, but they are not so really difficult in cultivation, keeps going over the summer too and don’t need very special care. The growing season in northern hemisphere is from September to March. If you provide the Psammophora with the right conditions, they will reward you with their unique shape, size, colour and a proliferation of blooms in winter. Being small plants, a representative collection can be grown on a patio table, a sunny windowsill or a shelf in the greenhouse.
Soil: It grows best in sandy-gritty soil and requires good drainage as it it is prone to root rot. It can grows outdoor in sunny, dry, rock crevices (protection against winter wet is required) It can also be cultivated in alpine house, in poor, drained soil.
Repotting: They may stay in the same pot for many years. Plants grown in larger containers have frequently relatively poor flowers. They might improve when the plants are given their own, small individual pots.
Fertilization: Feed it once during the growing season with a fertilizer specifically formulated for cactus and succulents (poor in nitrogen), including all micro nutrients and trace elements diluted to ½ the strength recommended on the label. It thrives in poor soils and need a limited supplies of fertilizer to avoid the plants developing excess vegetation, which is easily attacked by fungal diseases.
Watering: The Psammophora thrive in dry and desert regions and are able to stand extended periods of drought and require careful watering. Water minimally in summer, (only occasional misting), water more abundantly when they are growing in the autumn and spring, but let the soil dry between soaking. Requires little water otherwise its epidermis breaks (resulting in unsightly scars). If grown in a container, bottom watering by immersing the container is recommended. It must have very dry atmosphere.
Light: It needs a bright sunny or light shade exposure in winter, but keep cool and shaded in summer.
Hardiness: It prefer a very bright situation and require a minimum temperature 5°C (But will take a light frost and is hardy down to -7° C for short periods if it is in dry soil). USDA zones 9A – 11.
Uses: Container, rock garden.
Pests and diseases: It is vulnerable to mealybugs and rarely scale.
Propagation: Seed in autumn or (or rarely) cuttings. Take the cutting from a grown-up mother plant. Each cutting must contain one or more heads along with a fraction of root and permit to dry out a couple of days, lay it on the soil and insert the stem end partially into the soil. Try to keep the cutting somewhat upright so that the roots are able to grow downward. It is relatively difficult to root Psammophora from cuttings and generally pointless as well, so quick are they from seed.