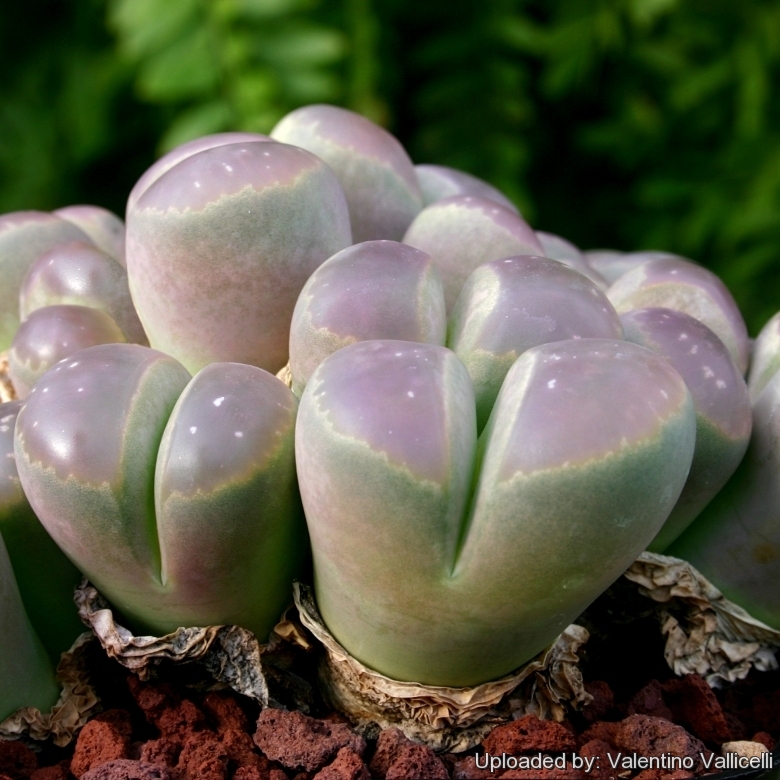 Origin and Habitat: 10 km North of Pofadder, South Africa
Habitat: Lithops olivacea is a quartz lover and will always be found growing either on big outcrops of quartz or more commonly on quartz plains where the quartz pebbles protect the plants from the blazing summer sun by reflecting a lot of the light and heat.
Ecology: Its hard translucent gloss closely resembles the white quartz crystalline rubble of its habitat. Another succulent plant that is almost always found growing with Lithops olivacea is Avonia papyracea, which loves quartz too. In times of drought the plants shrivel and are almost invisible, as they get covered with fine wind-blown sand. After rain, however, they absorb water and become fat and turgid. There is a considerable correlation between the colour of different populations and the nature of their habitats. For example L. olivacea, which is more red-brown, green-brown in appearance in its westerly locations, becomes yellower in the dry season and more purplish-red-grey further north. The more widespread a taxa, the more there is variation within that taxa.

Description: Lithops olivacea is a distinctive specie with large nail-shaped olive green windows on convex upper surfaces, often flecked with a few whitish islands. It is quite uniform and relatively easy to identify.
Habit: It is a tiny egg-shaped, geophyte succulent, usually forming clumps of 2 to 10 heads or sometime compact agglomerate with up to 30 or more usually less than 2 cm tall.
Bodies (Paired leaves): Up to 24 mm long and 18 mm broad at the fissure, mostly about 18 X 15 mm. Leaves firm, tightly pressed together, fissure 6-12 mm deep, but not gaping, top of surface truncate to slightly convex, occasionally slightly concave or in the older stage strongly convex; window usually large, always shaped like a nail, olive-green to bluish green or grey pink, transparent, sometimes light-green with few (very) sparse white islands in it, rarely ridged or immaculate. As a rule in Lithops the margins show various degrees of indentation, but in L. olivacea, the inner margin is straight and plain and without markings, while the outer margin usually denticulate or rarely quite plain; in the older stage a number of blue-green dots appear on the margins of the window. Margins and islands various shades of opaque creamy grey, often tinged with yellow, green, pink, buff, pale salmon or mauve. Shoulders as for the margins, but usually greyer and duller.
Flowers: Diurnal, long lasting, yellow with white throats, up to 45 mm across, but usually less.
Blooming season: Late summer to mid autumn.
Fruits: Capsules mostly 5-chambered. Boat-shaped, top flat. Face elliptic, up to 9 by 7,5 mm.
Seeds: Yellow-brown, rugose.

Subspecies, varieties, forms and cultivars of plants belonging to the Lithops olivacea group 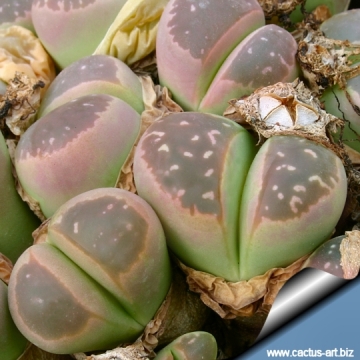 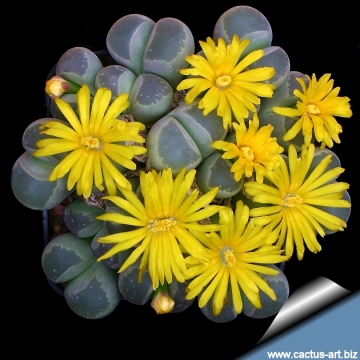 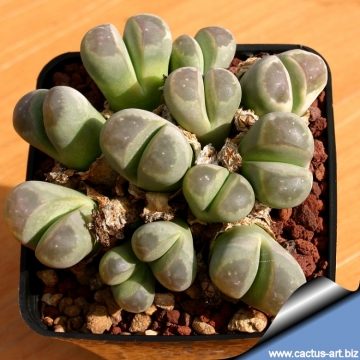 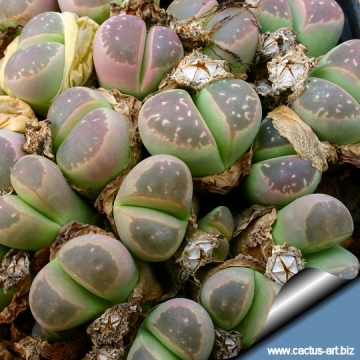 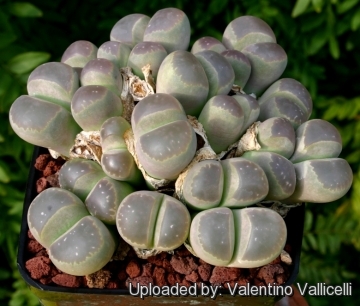 Cultivation and Propagation: Lithops olivacea is relatively easy to grow but great care needs to be taken with soil, temperature, time and amount of watering. It is a winter growing species and heads for dormancy in summer.
Growth rate: It is slow growing but clustering in cultivation, if grown correctly, it will reward the grower with generous displays of flowers.
Soil: Since roots are quite shallow, use a sandy gravel mixture (e.g. 2 parts sand : 1 part clay loam : 1 part gravel) or a cactus mix with extra perlite or pumice. For best results, use a shallow pot, and only use the smallest diameter pot that will accommodate the plant. Clay pots help the plants to dry out between watering.
Waterings: Requires little water, otherwise its epidermis breaks (resulting in unsightly scars). Watering should be very sparing and regular only during the late autumn and early winter months, e.g. no more frequently than once in two weeks, but when watered, they should be drenched so that the water reaches the bottom of the container. Water minimally in summer, only when the plant starts shrivelling. It is also best to water in the mornings so that the excess water evaporates and the upper layers of soil dry out fairly quickly. No water should ever be allowed to stand around the roots.
Exposure: Keep cool and shaded in summer, needs full sun or light shade in the other seasons. High levels of light are needed in autumn to flower and for good plant development. The low intensity of sun light during the growing season of this species generally prevents the white flower flowers from opening.
Special Advice: Lithops are best planted in a sunny and airy part of the greenhouse, and not too close to the glass roof or sides of the house as the plants can overheat during hot spells.
Fertilization: Need a perfect fertilizer diet during the growing season. Feed them once during the growing season with a fertilizer specifically formulated for cactus and succulents (high potash fertilizer with a dilute low nitrogen), including all micro nutrients and trace elements diluted to ½ the strength recommended on the label. They thrive in poor soils and need a limited supplies of fertilizer to avoid the plants developing excess vegetation, which is easily attacked by fungal diseases. Some growers fertilize frequently, some hardly ever. However, for the highly succulent mesembs, fertilization is not really necessary.
Hardiness: Although the plant will survive mild frost if kept dry (hardy as low as -5° C) it should be protected from severe cold and prolonged frost conditions.
Rot: Rot is only a minor problem with mesembs if the plants are watered and “aired” correctly. If they are not, fungicides won't help all that much. The plant turns immediately to mush when over watered, or watered out of season. Care must be given in watering, keeping them warm and wet while growing, and cooler and dry when dormant.
Reproduction: Seeds, cuttings or division. Sow them in spring or autumn. Germination usually occurs within about a week or two. Seed germinate at 15-21 °C. Cover the seeds with a very fine layer of grit and water from below with a fungicide to prevent damping off. For the first 3-4 days cover the pots with a sheet of glass/clear perspex to keep the humidity levels high. Remove the glass and replace it with light shadecloth and mist once or twice a day for the next two weeks after which most seeds should have germinated. From then on mistings can be reduced to every second and then every third day as the little plants grow. The young plants can be transplanted after a year, and flowering can be achieved within 3-4 years. The seed will remain viable for many years provided it is stored in a cool dry place. It is also possible to divide a multiheaded plant, but lithops prefer to grow clustered together and many growers prefer to leave them undisturbed to see how large a cluster can get. To separate a cutting from a grown-up mother, lift the plant, carefully cut through the rootstock. Each cutting must contain one or more heads along with a fraction of root and permit them to dry out a couple of days, lay the cuttings on the soil and insert the stem end partially into the soil. Try to keep the cutting somewhat upright so that the roots are able to grow downward.