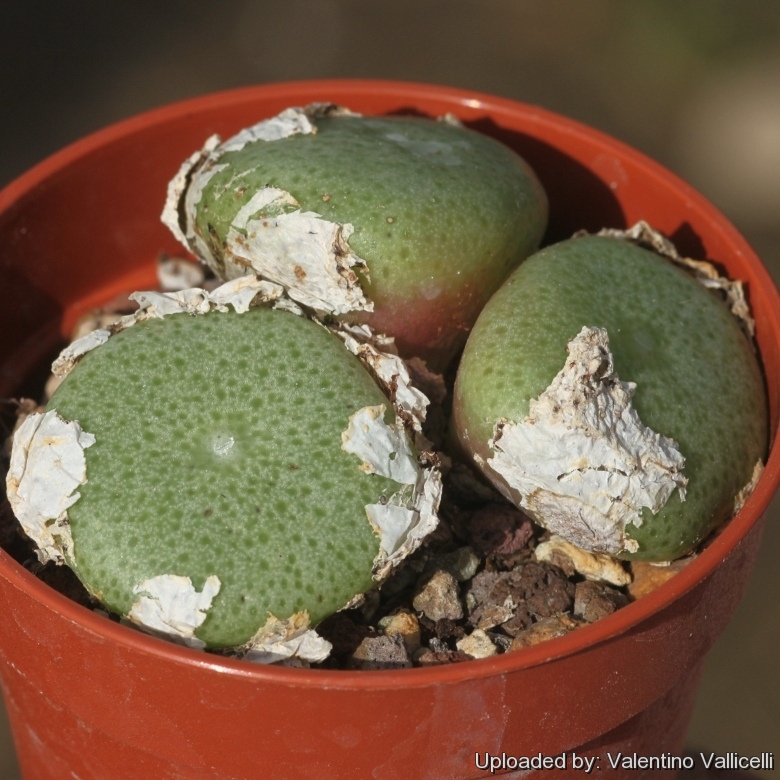 Origin and Habitat: Southern Namib on the banks of the Orange River and adjacent Namibian mountains. Namibia
Habitat: It grows in cliff-faces in rock crevices along with Tylecodon bruynsii, Aloe pavelkae and Kedrostis sp. (a succulent, cucumber relative). This species grows at a few locations and rapidly forms large clumps. In in summer, the young leaves are covered with remains of the present year’s leaves.

Description: Conophytum ricardianum (subsp. ricardianum) is a densely caespitose species, composed of numerous interlocking bodies. This species is closely related to Conophytum obcordellum.
Bodies (paired leaves): Completely fused (with very small fissures), sharply truncate, flattend spherical to disc-shaped and barely rising above soil level, pale green, old subhypodermal tannin idioblasts (tiny spots) blackened, sloughing off. During summer leaves will wither to sheath, protecting the new growth within.
Stem: Stemless or with very short underground stems with time.
Flowers: Pure white. The flowers have to tear their rude way through the tiny fissures and if it is watered too well at the start of the growing reason, the hydraulic pressure around the fissure stops the flowers from emerging.
Blooming season: The flowers are autumnal.
Fruit: Hygrochastic capsules, that usually remain on the plant, but strong winds can dislodge and blow them over considerable distances.

Subspecies, varieties, forms and cultivars of plants belonging to the Conophytum ricardianum group.

Notes: Plants of the genus Conophytum are also known as 'living pebbles'. During the rest period (the summer months) a new body forms inside the old, gradually taking all the substances from it until all that remains is the skin, which dries and protects the young plant from the heat of the sun and excess evaporation of water. The resting Conophytum protected by this dry cover resembles a pebble and hence the name 'living pebble'. The growth period of most species is from August to March. The temperature should be about 10 to 12°C. 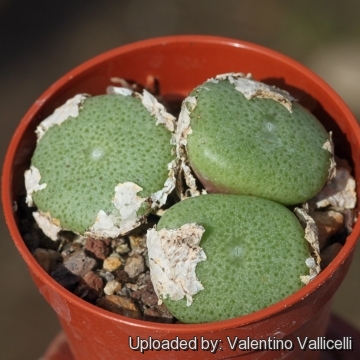 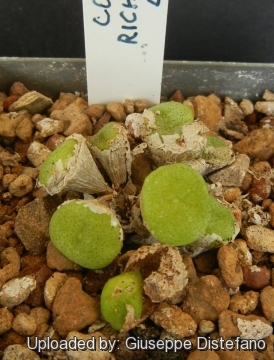 Cultivation and Propagation: Conophytum ricardianum is a "winter" grower which is most active from late autumn until later spring and heading for summer dormancy.
Soil: Requires good drainage as it is prone to root rot. It can grows outdoor in sunny, dry, rock crevices (protection against winter wet is required) It can also be cultivated in alpine house, in poor, drained soil.
Watering: It requires little water; otherwise its epidermis breaks (resulting in unsightly scars). Water minimally in summer (once a month is enough). Water sparingly in winter after the previous year's leaves have dried up. Requires good drainage.
Fertilization: Feed it once during the growing season with a fertilizer specifically formulated for cactus succulents (poor in nitrogen), including all micro nutrients and trace elements diluted to ½ the strength recommended on the label. It thrives in poor soils and need a limited supplies of fertilizer to avoid the plants developing excess vegetation, which is easily attacked by fungal diseases.
Exposure: It needs full sun or light shade, but keep cool and shaded in summer.
Temperature: Hardy to -2°C. Ensure a very good ventilation.
Repotting: Avoid to repot frequently. This plant may stay in the same pot for many years.
Uses: Container, rock garden.
Pests and diseases: It is vulnerable to mealybugs and rarely scale.
Propagation:: It can be reproduced both by cuttings and seeds. Take the cutting from a grown-up mother plant. Each cutting must contain one or more heads along with a fraction of root. It is easily propagated by seed. The small seeds can be sown in pots of fine, well-drained sand, any time during the spring and summer months when temperatures are warm. Cover the seeds with a very fine layer of grit and water from below with a fungicide to prevent damping off. For the first 3-4 days cover the pots with a sheet of glass/clear perspex to keep the humidity levels high. Remove the glass and replace it with light shadecloth and mist once or twice a day for the next two weeks after which most seeds should have germinated. From then on mistings can be reduced to every second and then every third day as the little plants grow.