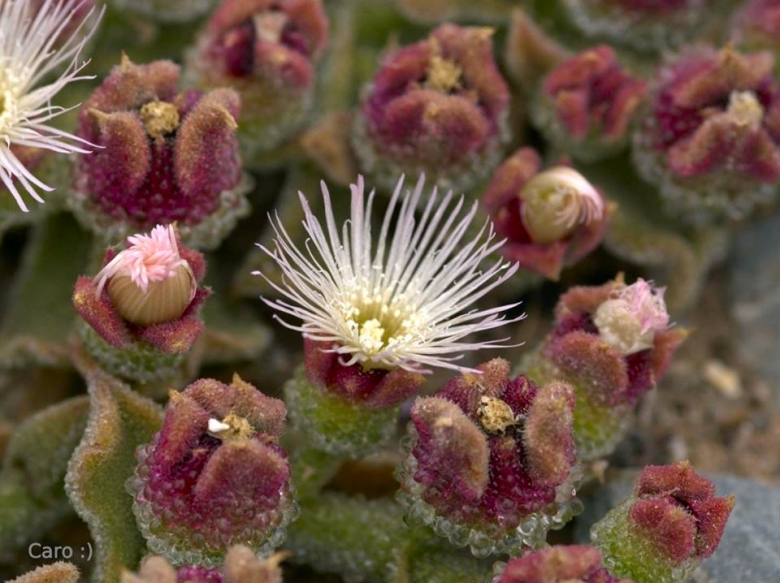 Origin and Habitat: Africa, Sinai, Canary Islands and southern Europe, and naturalized in North America, South America, Australia and Pacific and Atlantic Islands. And is in cultivation as an ornamental elsewhere.
Altitude range: 0-100 metres above sea level.
Habitat and ecology: Mesembryanthemum crystallinum occurs in coastal bluffs, cliffs, ballast dumps, disturbed ground on a wide range of soil types, from well-drained sandy soils (including sand dunes), to loamy and clay soils. Its unique physiology and ability to accumulate salt has enabled it to tolerate nutritionally poor or saline soils. As with many introduced species it also grows in disturbed sites such as roadsides, rubbish dumps and homestead yards. It tends not to grow in shade

Description: Mesembryanthemum crystallinum is a robust prostrate herbaceous-succulent or dense prostrate shrub to 1 m wide, with a small basal non-flowering rosette. Plants are densely covered with large, white, glistening bladder cells or water vesicles, reflected in its common names of 'ice plant'. The bladder cells are enlarged epidermal cells and are especially prominent on the receptacle. The main function of these bladder cells is to reserve water. It can be annual, biennial or perennial, but its life cycle is usually completed within several months, depending on environmental conditions. The annual plant is called by Haworth M. glaciale, the biennial M. crystallimum. It is one of the most prolific bloomers of all mesembs, flowering from April to September or even year-round if conditions are favourable. Flowers are white or rose-coloured.
Stems: Trailing,diffusely procumbent, dichotomously branched up to 1 metre long, internodes terete c. 6 mm in diameter.
Leaves: Sessile or petiolate, opposite, or in the branches alternate, petiole, more or less stem clasping, blade ovate or spathulate, flat, acute or acuminate, basal leaves largest, 2-20 cm long, and c. 3.5 cm broad, margin undulated. Bladder cells very large, rounded to elongated.
Inflorescences (Cymes): Axillary or terminal, almost sessile. Basal bracts opposite, leaflike; upper bracts alternate, reduced.
Flowers: Hermaphrodite (have both male and female organs) and pollinated by Insects. White, suffused pink 7-30 mm in diameter. Calyx lobes 5, unequal. Tube round campanulate, terete, ageing red. Perianth segments 20-40, connate into tube, ovate, retuse and acute white, aging pink.. Filamentous staminodes and stamens not particularly numerous (about 30), nectaries shell-shaped, stigmas white, bladder cells of the receptacle especially prominent.
Blooming season. Mesembryanthemum crystallinum flowers year-round, mainly from spring to summer. Flowers open in the morning and close at night, and are insect pollinated.
Fruits: Capsules coarsely papillate,valve wings inflexed over the valves.
Seeds: About 200, brown, rough with minute tubercles. During seed production, older portions of the plant progressively senesce, die off and dry out. The developing seed capsules continue to grow and produce viable seeds. Seeds at the top of the capsule may germinate immediately while seeds at the base remain dormant for long periods.
Chromosome number: 2n = 18.
Similar species: Mesembryanthemum nodiflorum is similar to M. crystallinum, although it tends to be smaller in all its parts. It also posseses the distinctive bladder cells found in the latter species. This species is also very similar to Mesembryanthemum guerichianum. However, M. crystallinum has smaller flowers than M. guerichianum and is always exceedingly papillose. 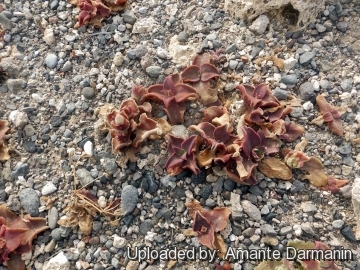 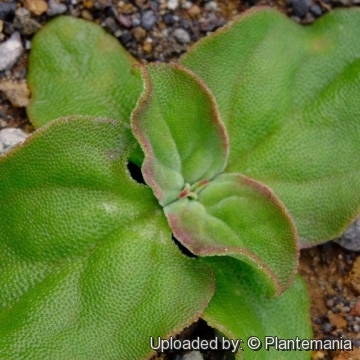 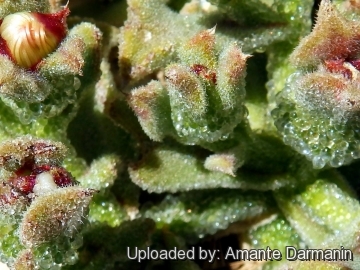 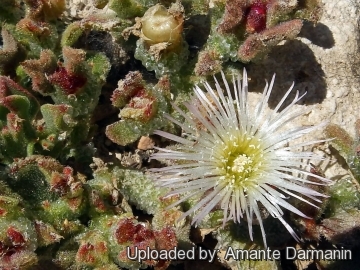 Cultivation and Propagation: Mesembryanthemum crystallinum is a very ornamental plant, occasionally cultivated for its edible leaves. It is easily grown.
Soil: It grows well in an ordinary well-drained garden soil but thrives in a wide range of soil comprising light (sandy), medium (loamy) and heavy (clay) soils, prefers well-drained soil and can grow in nutritionally poor soil. Suitable for both acid, neutral and basic (alkaline) soils and can grow in saline soils so long as it is in a sunny position.
Light requirements: It cannot grow in the shade.
Hardiness: It is not very hardy and will be killed even by a light frost. It is, therefore, usually grown as a half-hardy annual, being sown in a greenhouse in the spring and used for summer bedding.
Pest and diseases: Plants have few problems with pests or diseases though the young plants are prone to root rot and damping off unless given plenty of ventilation and dry growing conditions.
Edible Uses: Leaves and stems may be eaten raw or cooked, as with some other members of the Aizoaceae family. They can be used as a spinach substitute. The leaves have an acid flavour, they are thick and very succulent with a slightly salty tang. They can also be pickled like cucumbers or used as a garnish. Seeds can also be eaten.
Other uses: The crushed leaves can be used as a soap substitute and has some medicinal uses. It is rarely, if ever, grazed upon by domestic stock. Its use to treat scurvy by sailors, its popularity as an ornamental potted plant aboard ships, and its occurrence in ballast dumps (as in Pennsylvania) were some of the means by which this species has become so widespread throughout the world. Gauchos in Argentina used it to treat venereal disease.
Propagation: Seed - sow spring in a greenhouse, only just covering the seed. When they are large enough to handle, prick the seedlings out into individual pots and plant them out after the last expected frosts. Seedlings are prone to damp off so should not be over watered and should be kept in a very sunny well-ventilated position