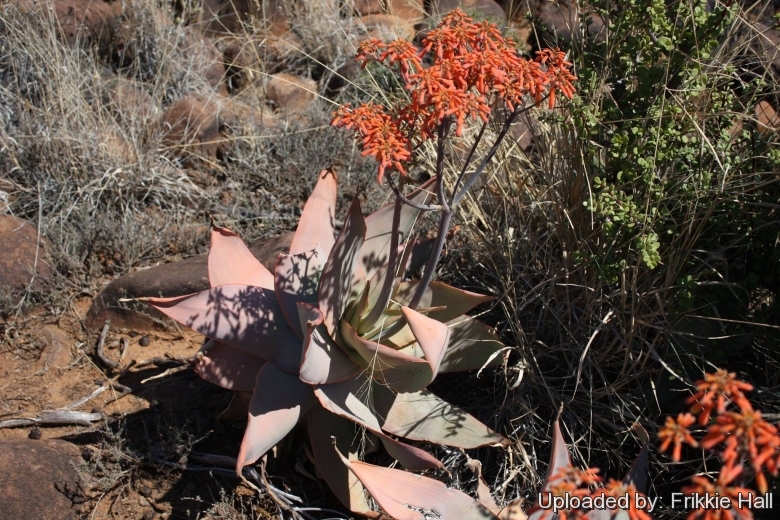 Origin and Habitat: South Africa ( widely distributed over the Eastern & South Western Cape province)
Habitat: It grows in large colonie on stony soils in rocky hillsides in arid areas near the coast and the drier inland karoo areas.
Ecology: As with most aloes, the plants provide nectar during winter which is an important source of food for the attractive sunbirds and many other nectivorous birds during the cooler period of the year when food is not readily available.

Description: This is a fantastic sculptural aloe with broad silvery leaves with dark green stripes. It grows almost always as a single stemless rosette, usually about 25 cm tall and 45 cm diameter (but it can grow up to to 1 m in diameter in optimal conditions), older specimens may develop a short trunk.
Leaves: 5-20 x 20-50 cm, very fleshy, broad, spreading, smooth, with spineless margin, silvery to blue green that vary in colour depending on amount of sunlight; in very hot areas the foliage is reddish and in cool spots they will be bluish-green, leaves go pink in winter when it gets cold. They are softly striped with many grey-green lines running down the length of the foliage and are edged with a thin pink-orange incurved margin.
Flowers: Attractive coral red in tall flat-topped many-branching inflorescences (approx 60 x 60 cm).
Blooming season: Winter to mid-spring an flowers last up to three months.

Subspecies, varieties, forms and cultivars of plants belonging to the Aloe striata group

Notes: True Aloe striata is often hard to find because most seedlings are derived from seed of plants grown in cultivation, which tend to hybridize with other Aloes in the garden, producing mostly inferior hybrid seedlings, this hybrids are similar but usually have spiny edges. 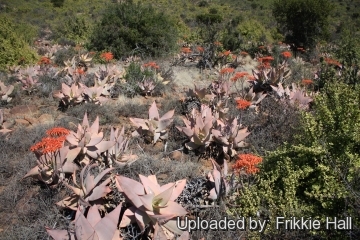 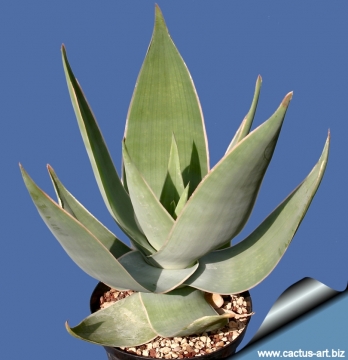 - The beautiful symmetry make this plant a standout amongst aloes. Photo by: Cactus Art 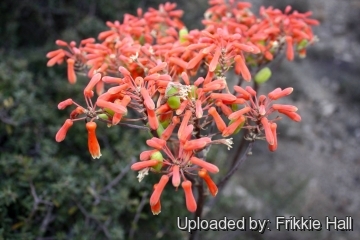 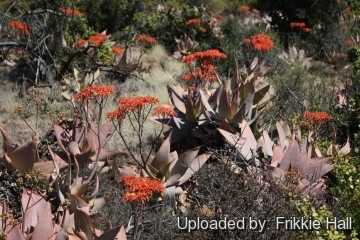 Cultivation and Propagation: Aloe striata is a popular and most rewarding garden and pot plant. Mostly a winter grower, it is relatively easy to cultivate under a wide variety of climatic conditions provided it is planted in a well-drained situation given adequate water but not over-watered. Grows it full sun and but protect in summer from afternoon sun, and avoid reflected heat. This species, as with most Aloe species, is subject to attack by snout weevil, white scale and aloe rust, although healthy specimens don't fall prey to pests and disease as easily as stressed plants do. Plants grown outdoor can withstand extreme frost and prolonged drought and can survive often for several seasons without water, at which point the leaves turn a reddish colour, a sign generally associated with stress. Frost hardy to -5°C. Maintenance: Removal of old flower stalks; During the winter months, the plants should be grown cool to initiate flower development (about 5-10°C ).
Propagation: Propagation is from seed which germinates easily if sown in well drained soil and covered lightly with fine sand. Seedlings grow fast, reaching flowering size in three to four years. Seeds must be sown as fresh as possible. Fresh seeds germinate quickly at 18°C.