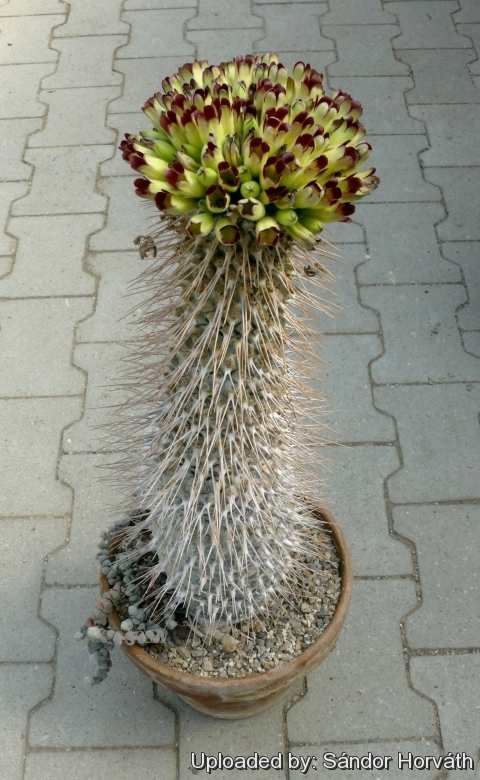 Pachypodium namaquanum Photo by: Sándor Horváth
This species must rate as one of the the most sought-after and loveable of all large succulents which has fascinated generations upon generations. Plants are extremely slow growing, around 0.5–1.5 cm per year and can become a hundred years old or more.

Origin and Habitat: Richtersveld (Northern Cape and southern Namibia. along both sides of the lower Orange River Valley from the Tantalite Valley and Pella mountain range in the east to the Richtersveld, Huib-Hoch and Huns Mountains in the west. It has been recorded from more than 50 localities within an extent of occurrence of approximately 15,000 km². The Gariep Region or Orange River region is the area that has the greatest variety of succulents on earth. The subpopulations on the Namibian side of the Orange River are inaccessible and therefore generally secure. They are fairly large, with an average density of between 625 and 1,100 individuals per hectare. Similar densities, with a range of ages, are also found on Pella Mt.
Habitat: Arid, rocky deserts and mountains at altitudes from 300–900 m above sea level The climate is harsh and the weather can be quite unpredictable. Rainfall here occurs mainly in winter and varies from 50 to 150 mm. Extremely arid conditions are to be found in the rain shadows of certain mountain ranges where the rainfall may be 15mm or less. Thick fog moving inland from the Atlantic coast can add to the precipitation. Temperatures in summer may reach 50°C. Plants seem to favour rocky and stony hill slopes that are exposed to extreme summer conditions particularly heat and wind. The species has been subjected to much illegal collecting, especially in the Richtersveld, as plants are highly sought-after on both the domestic and international markets. There are further threats from mining activities in Namibia and intense grazing and trampling of the surrounding vegetation by domestic livestock in the Richtersveld. There are also low levels of recruitment in the latter subpopulation, apparently because of insect parasitism of the seeds.

Description: Usually single-stemmed succulent plant or small tree, growing extremely slowly. The stem will grow up to 25 centimetres in diameter and the height may range between 1.5 and 2.5 m when fully grown; however, 4 and 5 m specimens have been observed.
Stem: It has a cylindrical trunk, that thicksets at the base and tapering to the top that gives them an unmistakable bottle-like appearance when mature. The stems are mostly unbranched but may become branched from near the base or - where damaged - the trunk produces side-branches that immediately curve back to the vertical, while the very top of the plant is usually bent to the north, in the same way that Copiapoa cinerea (Cactaceae) of the Atacama Desert leans to the north.
Spines: The stems are covered with warty tubercles (knob-like projections on the stem), from which sharp spines protrude in a slightly downward direction. The spines are more abundant along the top half of the plant and decrease toward the base where tubercles are more prominent.
Leaves: Undulate simple, obovate to oblong, green-grey and densely velvety on both surfaces. They form a crowded rosette at the apex of the trunk during the growing season. Leaf apexes are tapering or rounded; bases narrowly tapering. The leaf margins are entire and very wavy which is another distinctive characteristic of this succulent. The plants has another flush of leaves after blooming.
Flowers: Tubular velvet-textured, up to 50 mm long and 10 mm across at the mouth. They are red on the inside and yellow-green outside, the petals have dark red tips. The Pachypodium namaquanum generally blooms at 6 year old or older, 30 cm tall.
Blooming season: The flowers appear from July to October.
Fruit: Twin pencil-thin tapering seedpods (follicles) in a V-shape (joined at the base) up to 50 mm long. Short, soft and grey hairs densely cover the fruit. These are pale brown and split down one side to release the wind-dispersed plumed seeds.
Seeds: About 4 mm long and attached to a tuft of whitish hairs that act as parachutes. Seeds normally ripen from September to December. 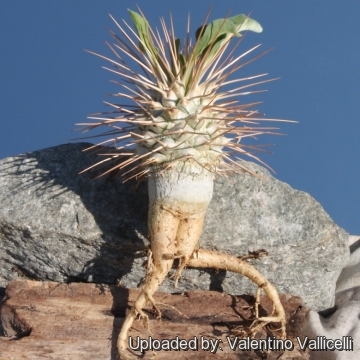 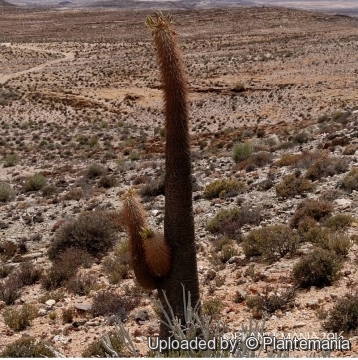 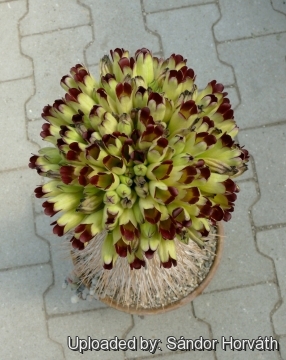 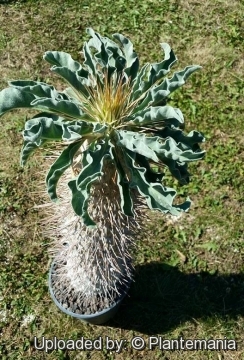 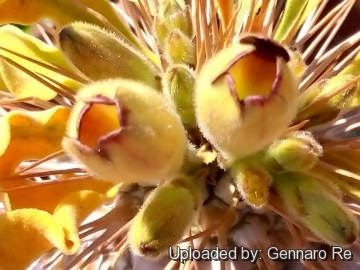 Pachypodium namaquanum Photo by: Gennaro Re 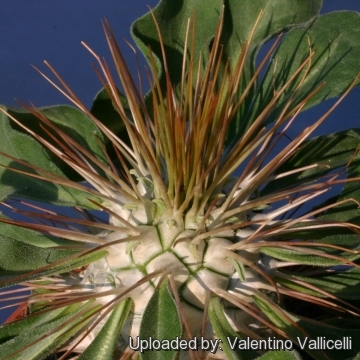 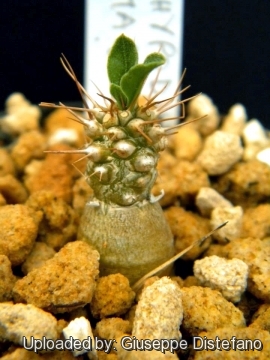 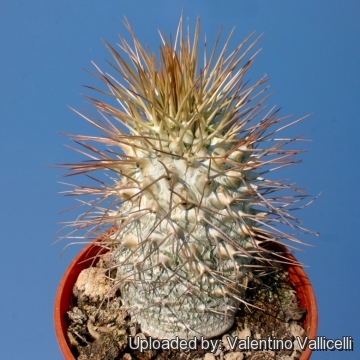 Cultivation and Propagation: Pachypodium namaquanum is a winter grower, it grows from November to April. They seem to be rot-prone under less than ideal conditions and care. Water sparingly and give extra well-drained soil to avoid waterlogged conditions Give it moderate water during this growing period, and minimum to no water the rest of the time. Will take some light frost. Sun Exposure: Light shade to full sun. To make them less prone to rotting, they can be grafted onto Pachypodium gaeyi or Pachypodium lamairei. Plant grafted grow even faster and flower easily.
Propagation: Seeds or cutting: It grows easily from seeds as long as seeds are fresh, Seeds can be sown in the summer. After germination, care should be taken not to overwater as this encourages rot and fungal infestations. Keep plants well ventilated, in good light and dry plants out in the dormant season which is summer (March to Oct).
With cuttings the success is not always guaranteed. Cuttings should be taken in the period just before the growing season starts and the wound is treated with a fungicide and then left to dry for at least two weeks. Cuttings are inserted in a well drained medium. Cuttings are kept in a hot well-lit and ventilated area and watered sparingly in the winter months; once a week should be more than enough.
Warning: It is known that P. namaquanum also contains poisonous alkaloids as its sap is also used for arrow poisons. The sap can also cause blindness when in contact with the eyes.

by Valentino Vallicelli
There are a total of 17 Photos.
Click here to view them all!
Cite this page: "Pachypodium namaquanum" Text available under a CC-BY-SA Creative Commons Attribution License. www.llifle.com 14 Nov. 2005. 15 Aug 2020. </Encyclopedia/SUCCULENTS/Family/Apocynaceae/121/Pachypodium_namaquanum>