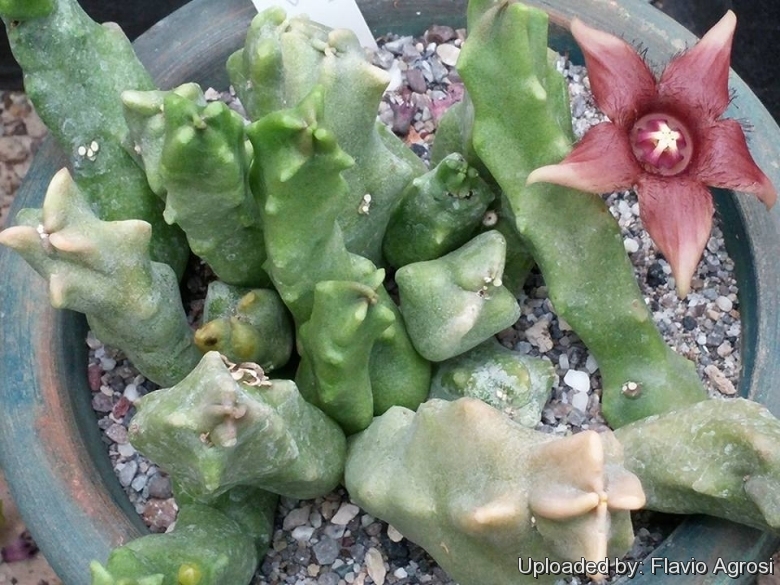 Origin and Habitat: This small succulent is known only from a single locality where its estimated area of occupancy is extremely small (less than 100 m²). The site is at 900 metres above sea level on a granite outcrop in the relatively wet central mountains of Socotra, Adho-Dhemalu Island (Yemen) in the Indian Ocean. This is an unexpected place to find a succulent, however, its niche is specialised: dry, exposed, south to southeast facing slabs of granite. A search of likely habitats at similar altitudes in the mountains has failed to find further subpopulations.
Conservation status: Critically Endangered. The population is healthy and actively regenerating. However, due to the popularity of such plants with succulent enthusiasts, the low numbers of individuals (under 50) and the relative accessibility of the only known site, the plant is considered Critically Endangered.

Description: Caralluma dioscoridis is a low succulent, suckering freely, forming large, dense, colonies up to 1 m across groups (not in cultication). It is a very rare Socotran endemic that shows a unique combination of Caralluma and Orbea / Duvalia / Whitesloanea features. It is believed that the similarity to Caralluma is through convergence and that its true relationships are nearer Orbea prognatha or Duvalia sulcata. In habit (when not in flower) it superficially resembles Caralluma europaca but the affinities (on the basis of stem form only) are significantly vague. The morphology of pollinaria and fruits indicates, as does the name, a relationship of Duvaliandra with Duvalia, while in stem morphology and biogeography, Whitesloanea appears to be much closer. On the other hand, corona, anthers and style head indicate that this Socotran endemic occupies an isolated position. Some authors guess it could be an old wild duvalia-caralluma hybrid.
Derivation of name: It was called “Duvaliandra” for the similarity to the genus Duvalia (Asclepiadaceae) and “discoridis” for the ancient name of Socotra which is "Dioscoridis Insula" (Island of Discorides).
Leaves: None.
Stems: Prostrate, decumbent to ascending, 4-angled. quadrangular in cross-section, 2-10 cm high, 1-1,7 cm thick, pale grey-green smooth, rooting were touching the soil. Tuberclers small, hardly protruding.
Inflorescence: Lateral (basal to almost apical), sessile or shortly and broadly pedunculate, with few minute bracts, mostly with one single flowers, or 2 or 3 flowered, but usually only 1 flower open at a time.
Flowers: Corolla rotate, 35-55mm diameter, very fleshy, outside pale green, inside flesh-coloured to brownish red, glossy, base of tube and tips of the lobes often yellowish to flesh-coloured, deeply lobed, covered with brownish-purple club-shaped hairs these about 2 mm long, simple, erect. Corolla tube 2-4 by 8-12 mm, bowl-shaped, basally papillate. Corolla lobes triangular pointed, 15-20 mm long 10-14 mm wide. Pedicel 5-30 long and 1.5-2.5 mm wide. Sepals triangular, acute, 2 - 4 mm glabrous. Corona apparently uniseriate, sessile, purple, lentil-shaped, 6-8 mm diameter, lobes trapezoid from a thickened and broadened base surrounding the style head.Anthers small, placed almost vertically on the short style head. Scent strong and foetid.
Fruits: Less than 6 cm long cylindrical, acute. 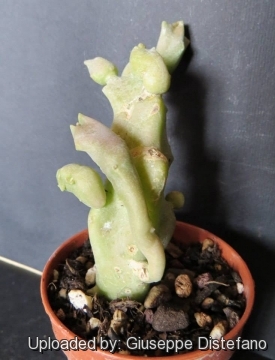 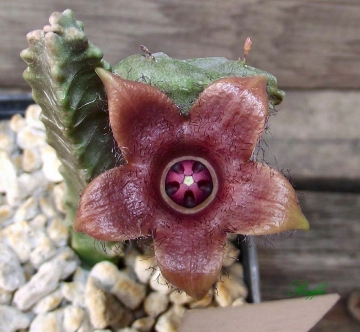 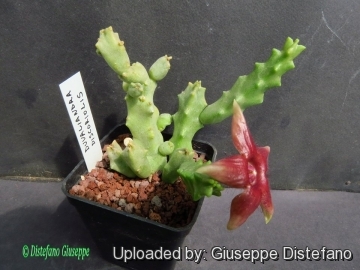 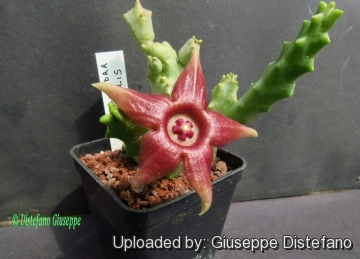 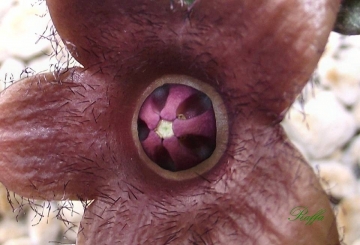 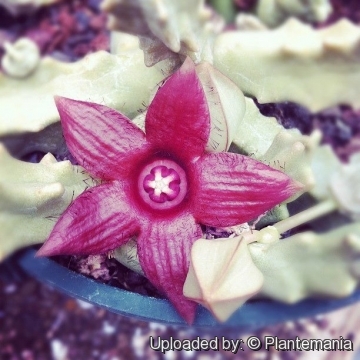 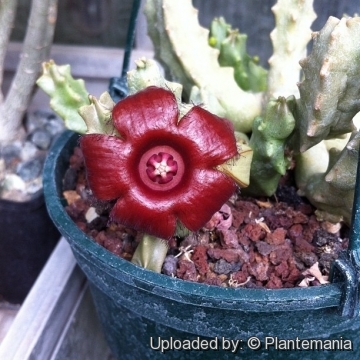 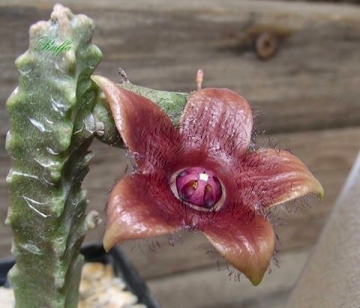