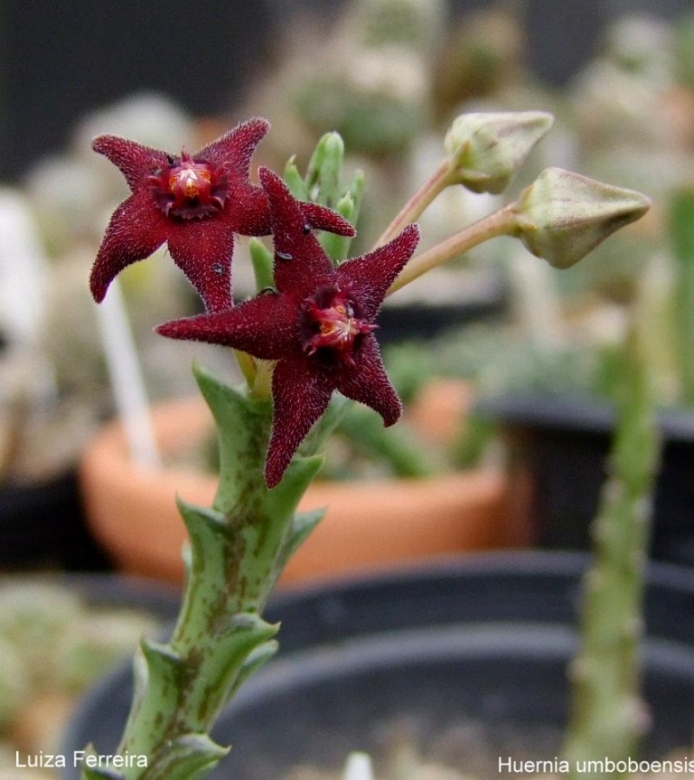 Description: Orbea ubomboensis is a dwarf fleshy-stemmed, perennial succulent member of the Asclepiadaceae family usually under 60 mm high, distinguished from all other Orbeas in southern Africa by the small, uniformly coloured, dark flowers borne near the apex of the stem. Although the flowers superficially resemble some of those in species from the northern part of the range of the genus, the corona is different. Leach (1978) and Gilbert (1990) suggested that this species is allied to Orbea miscella, but Hunter Thomas(2002) found that it is most closely related to Orbea schweinfurthii.
Habit: It form small clumps or mats that usually spreads by means of underground runners, however plants observed in Brachystegia woodland in Mozambique showed no evidence of subterranean growth at all and spread by means of stems that lay nearly horizontally on the surface of the soil, as is usually seen in Orbea schweinfurthii, but this is the only locality where such a habit has been seen or recorded.
Derivation of specific name: "ubomboensis" of the Ubombo (Lebombo) area in Eastern South Africa.
Stem: Ascending prostrate to erect, that may reach 8 cm long and 7 mm in diameter in cultivation, but in the field they are small, often only 2 cm tall and 5 mm in diameter, 4-angled with peculiar, particularly small spreading tubercles ending in small erect rudimentary leaves and an unusual dark colour. The stems are branched, and may be connected beneath the surface by slender, white runners up to 1.5 cm long. The aboveground portions are usually uniformly dark green or dark grey to brown and only very occasionally have any of the usual darker mottling against a paler background. However brightly mottled stems on a pale background are reported on the north part of the areal.
Flowers: 2-3 grouped at the stem-tips, star-shaped, erect, small and uniformly coloured. Pedicel 5 mm long. Sepals c 2 mm long. Corolla c 8-10 mm across, rotate, inner surface hairless, elvety in appearance, dark purple, dark maroon, rough (under the microscope this can be seen to be a dense covering of irregularly transverse ridges that are themselves covered with small, multicellular papillae). Outer corona of 5 deeply bifid dark purple lobes, inner of five lobes joined at base to outer. In this species the flowers emit quite a strong, slightly fruity, fetid smell. In cultivation numbers of tiny flies have been seen swarming over the flower shortly after it has opened and have been observed to remove pollinia
Fruit (follicles): A pair of follicles, half erect, about 3,5 cm long, 3 mm in diameter, tapering to both ends, smooth.When the follicles are fully-matured they burst open to release the seeds, each of which has a tuft of hair (or coma). 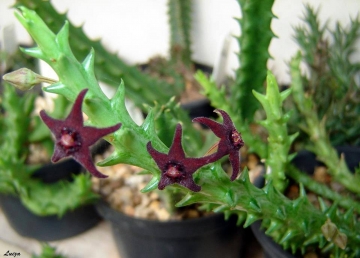 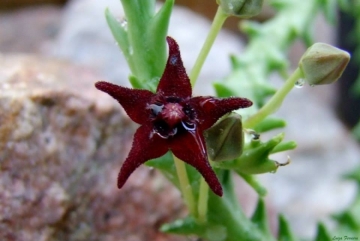 Cultivation and Propagation: Orbea ubomboensis is an easy obliging blooming plant when mature, that it is happy in any average succulent house.
Potting: Since roots are quite shallow, use a soft and incoherent cactus mix or add extra perlite or pumice to regular soil potting soil, and clay pots help the plants to dry out between watering.
Waterings: Orbeas require moderately watering through the growing season but enjoy plenty of water and some fertiliser in hot weather, this helps them to flower freely. Water more sparingly in winter according to temperatures. But, as with most asclepiads, it is unwise to leave them wet in cold weather.
Fertilization: Fertilizers for succulent plants must be rich in potassium, but poor in nitrogen, to avoid the plants from developing excess vegetation, which is easily attacked by fungal diseases.
Sun Exposure: As with many succulents, they prefer to grow in the light shade of scrubby shrubs or between rocks where they get some shade during the day. In summer it is advisable to position this plant in a partially shady place, where it is exposed to direct sunlight only during the coolest hours of the day.
Hardiness: These plants don't like cold weather, therefore in the Spring it is best to set them outside only when the temperatures are above 15°C. Can endure temperatures below 5°C for short period, but only if the soil stays completely dry.
Pest and diseases: Orbeas species vary in their susceptibility to rotting, but are generally fairly easy to grow, especially if kept pest-free. They are very susceptible to stem and root mealy bugs, and damage from these may well initiate fungal attack. If you do have problems with a stem or with basal rotting, you can reliably isolate the healthy parts, dry them off, and re-root them in moist compost.
Cultural Practices: Re-pot every 2 years.
Propagation: Easiest with stem cuttings. Allow cuttings to dry a day before planting. Stems must be laid (Not buried) on gritty compost and will then root from the underside of the stems. It can also be increased from seeds sowing in spring in moist, sandy peat moss. Barely cover seeds. Seeds germinate quickly.