Origin and Habitat: Republic of South Africa, Eastern Cape. Range Katberg and Amathole Mountains and King William's Town to Komga.
Habitat and Ecology: Grassland. Brachystelma meyerianum is a variable species, more widespread and often found in shallow soils rocky outcrops on damp margins of exposed dolerite rock sheets in the grassy foothills of the Katberg. The population trend is stable. B. meyerianum is potentially threatened by herbivores that graze it in habitat amongst short grass. This leads to the loss of flowers and follicles each season. Quite a lot of tubers get damaged by the hooves of grazing animals and this may lead to fungal infections and rotting. B. meyerianum and Brachystelma caffrum are often found growing together where their distributional range in the Eastern Cape overlaps. Both species frequent rocky hilltops and, although they occur side by side at times, there are some differences in the micro-habitats occupied by the two plants. B. caffrum grows in very densely packed colonies at the edges of sheets of exposed rock or else on shallow swards of soil on flat expanses of exposed rock. B. meyerianum shows a preference for gently sloping soil at the edges of sheets of rock or else vertical and angled cracks and crevices on more sharply sloping ground. Where the two species occur together, B. caffrum generally outnumbers B. meyerianum.

Description: Brachystelma meyerianum is a dwarf perennial herb branching at the base, with several stems that grows to about 15 cm tall, with a small flattish underground tuber (caudex). It is a variable species characterised by two growth-habits in given populations. Some plants are prostrate, their branches lying level with the ground. Others have an upright habit with vertical branches. In both instances the flowers are aligned horizontally to the to the stems. The hairy flowers of of this species are off-white to brown or eventually greenish-yellow, and have a fairly strong, unpleasant cheese like aroma or a rotten poultry-flesh odour and attract large numbers of pollinating flies when the smell is most intense, from midday until well into the afternoon.
Distinguishing characteristics: The rising inner corona-lobes above the staminal column are distinctive, only to be compared with those of Brachystelma cathcartense, but the last mentioned has a wider corolla-tube and miss the long hairs on the corolla-lobes.
Tuber (caudex): Roundish, 40-60 mm diameter, flattish to depressed and often with slightly bowl-shaped central area.
Stems: One to several, branching at the base, 4-18 cm high, suberect or spreading, puberulous on the upper part.
Leaves: Stalked short, arranged in an alternate or opposite position, spreading. Petiole 1-4 mm long. Lamina linear-lanceolate to elliptic, up to about 30 mm long, 1.5-10 mm broad, acute or obtuse, wedge shaped at the base, varying from hairy to glabrous.
Flowers: Solitary or 2–4 together, subaxillary aligned horizontally to the stems. Pedicels 3-5 mm long, minutely scabrous-pubescent. Sepals 2.5-3 mm long, 1-1.5 mm broad, lanceolate, acute, minutely pubescent to glabrous. Corolla up to c.12 mm long, divided to about halfway: Corolla-tube about 6-7 mm long and 5 mm across, campanulate, glabrous and greyish-green outside, hairy within at the upper part, but when wetted the hairs become invisible. Corolla-lobes free, lanceolate-acuminate, 5-6 long, 2.5 mm broad at the base, thence gradually tapering to an obtuse point, apparently with more or less reflexed margins, ciliate with long white hairs and sometimes hairy on the basal part, cream, greenish or brown. Corona cup-shaped at base, about 1,5 mm deep, forming 5 pockets with outer margin narrowly V-shaped or slit, with few long hairs, lobes ciliate with long white hairs and sometimes pubescent near base. Inner lobes confluent with outer cup, ascending above staminal column.
Fruits (follicles): One or two follicles per flower, fusiform. B. meyerianum produces follicles consistently from one year to the next, but the number of follicles per plants is variable. The follicles mature quickly and seed is liberated during December and January. Seed germinate during the wet summer months of December to February. 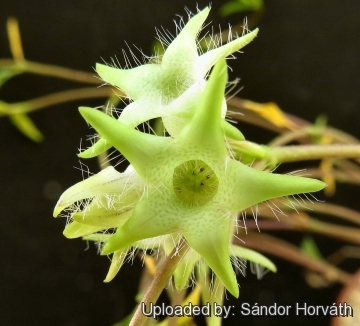 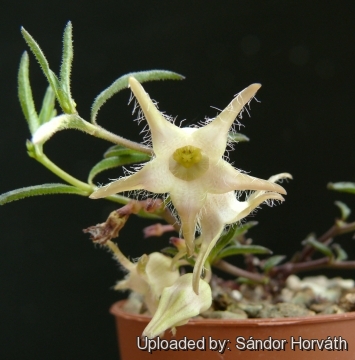 Cultivation and Propagation: In cultivation the plants are usually grown in semi shade, with the tubers wholly or (preferably) partially exposed to prevent scorching and rotting of the roots. This plant can take a good deal of water during active growth and should be watered only when not dormant. Keep dryish in winter. It should be overwintered in the greenhouse at temperatures over 12°C (avoid letting temperatures drop lower than 5° C). Use a very draining but rich soil. An error in cultivation may produce unsightly holes in the tuber.
Reproduction: This species can be reproduced by seeds. Sow seeds in summer in a well drained medium.