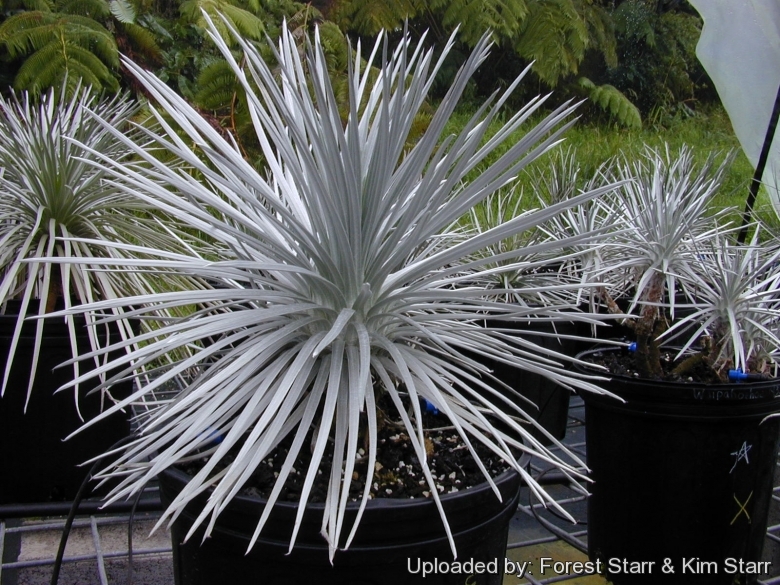 Origin and Habitat: Argyroxiphium sandwicense ssp. sandwicense grow only at the top of the Mauna Kea volkano on Hawaii and has an extremely restricted range. The species may have been abundant on all slopes of Mauna Kea in prehistoric times. In 1991, the total population was estimated at about 495 individuals, of which only about 38 were naturally occurring (i.e., unplanted)
Altitude range: In origin the species between 2600 and 3800 meters elevation.
Habitat and Ecology: Occurs in dry alpine desert; occasionally also in dry to moist subalpine shrublands and forests. Found on cinder cone slopes, cinder fields, lava flows, in rocky gulches, and on cliffs. Threats include introduced sheep, goats, mouflon sheep, pigs, predation of native pollinators by alien wasps and ants (the species is self-incompatible and relies on insect pollination), overcollection, and its small population size. The Mauna Kea silversword was once common on the volcano, and extraordinary conservation efforts are being made to preserve the species.

Description: The Mauna Kea silversword (Argyroxiphium sandwicense DC.) is a large rosette shrubs usually single-stemmed and rarely branched and is an impressive sight framed by the lava background of its volcanic habitat. This plant has a dense, broad crown of long, narrow, extremely shiny, silvery leaves forming a spherical or dome shaped structure. A single-stemmed individual lives for a number of years (5–50), produces a terminal inflorescence, then dies (monocarpic). When in flower the plant may be 3 meters tall and 75 cm wide. As many as 800 compound flower heads are carried on the inflorescence, and the individual flowers are pink or wine red.
Stem: The single thin woody trunks are very short and constrained by frost (usually not exceeding 5-8 cm tall). Old dry, leaves fail to abscis (to detach), remains strongly connected and form a skirt around the stem, preventing freezing.
Rosette: Globe-shaped, epigeal or nearly epigeal up tu 60 cm or more in diameter with individual leaves.
Leaves: Thick, spirally arranged, sword-shaped silvery-green floccose-sericeous, linear-ligulate to linear-lanceolate leaves up to 30 cm long and usually less than 1.3 cm wide. The leaves are completely covered with a dense layer of long silvery hairs. The leaves of all silverswords have an unusual and important ability to store water as a gel in intracellular spaces where other plant leaves contain air.
Inflorescence (raceme): Individuals produce a single flowering stalk, which appears in a few weeks before flowering, is narrow, but may reach nearly 3 m in height. It is composed of up to 600(-800), very sticky short branches, each terminating in a single capitulum (flower head) about 2-2.5 cm in diameter, each containing up to 500 individual pink to maroon disk florets. Each head has about a dozen pink to maroon (occasionally white) petal-like ray flowers around its periphery. After flowering, the entire plant dies. Atypical polycarpic individuals produce one inflorescence for each rosette, that flower and die independently from the main plant, so that these individuals die only after the last branch flowers. The inflorescence stalk, the bracts that subtend the pedicels, and the involucre bracts are all covered with sticky glandular hairs that emit a faint sweet odour.
Fruits: Each floret produces a single fruit, an achene, which may or may not contain a single seed. The achene resemble those of a sunflower, but are black, long and slender (± 1 cm long) and are usually crowned with a pappus of about 6 unequal scales less than 3 mm in length.
Phenology: The plant lives for many years until it flowers; estimates of its life span range from 5–15 years to 40 or more years. Flowering occurs once in the dry season (June-november), with annual number of flowering plants varying dramatically from year to year. Plants with multiple rosettes produce one inflorescence for each rosette; flowering may occur over several years before all rosettes are exhausted.
Remarks: The other subspecies, Argyroxiphium sandwicense subsp. macrocephalum (Haleakala Silversword ), is found island of Maui am the Haleakalā. They differ primarily in the inflorescence shape broader in the Haleakalā plants (less than 4 times as long as wide), and narrower on Mauna Kea (4.3-8.6 times as long as wide). The Haleakalā subspecies also generally has more ray florets, 11-42 versus 5-20 for Mauna Kea. 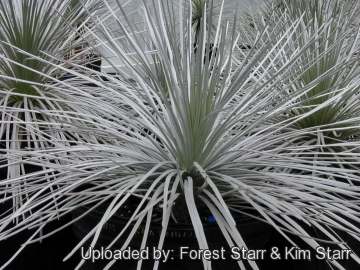 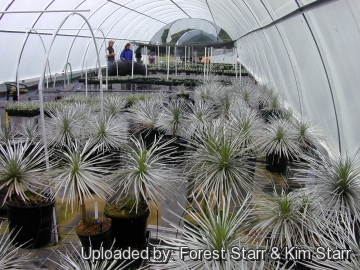