Origin and Habitat: Argyroxiphium kauense is a rare species of flowering plant in the Asteraceae family species endemic to the southeastern and eastern flanks of active volcano Mauna Loa on the island of Hawaii (and perhaps, at least formerly, on Hualalai). It is known to survive only in three areas (extent of occurrence only about 50 hectares). Currently, three populations with a total of fewer than 1000 individuals remain. The largest population is located on private land on Kahuku Ranch, which is controlled by the Trustees of the Damon Estate. A smaller population of the Kau silversword is located in the Upper Waiakea Forest Reserve, managed by the Hawaii State Department of Land and Natural Resources. A population of only five individuals established by outplanting is located in Hawaii Volcanoes National Park. All populations have been fenced to protect the plants from feral ungulates.
Altitude range: Historically, this species was common between 1,500 and 2,700 metres above sea level, but now it is found at elevations ranging from about 1,625 to 1,900 metres.
Habitat and Ecology: It grows primarily in bogs or openings in shrubby wet to most forests. Precipitation 1000-3750 mm per annum. Threats to A. kauense include grazing from mouflon sheep, cattle and goats, and habitat degradation by roaming pigs, and invasive alien plants. A. kauense is also threatened by stochastic extinction caused by lava flows or wildfires.

Description: The Kau Silversword (Argyroxiphium kauense) is a long-lived, large usually single-stemmed and strictly monocarpic shrubs or sparingly branched and polycarpic shrub forming spherical rosette with numerous dagger-shaped silvery succulent leaves. Argyroxiphium kauense, grows about 1.8 m tall and is a close relative of the famous silversword of Maui (Argyroxiphium sandwicense subsp. macrocephalum). It produces a tall multi-branched flowering stem and the flowers have a subtle beauty, that distinctly show their kindred with the common daisy. This plant is monocarpic (one that bears fruit and flower only once and then dies) and appear to be self-incompatible.
Trunk: Erect, usually solitary 5-70 cm tall. In the higher-elevation Argyroxiphium sandwicense the trunks are constrained by frost, whereas in the lower-elevation Argyroxiphium kauense the trunks are taller.
Rosettes: Single,basal or elevated, which may grow for 20 to 30 years, and
may reach 40-70 cm in diameter before flowering. The rosette dies after flowering.
Leaves: Long, sessile, blades narrowly linear-ligulate, dagger- shaped, triangular in cross section, pointy, stiff persistent, entire, 25–-40 cm long and up to 3-7 cm wide, silvery and highly reflective caused by dense and felty leaf hairs that helps to lower UV absorption. The leaves Argyroxiphium have massive water-retaining gels in the intercellular spaces. Old leaves fail to abscise, and they form a skirt around the stem, preventing freezing.
Inflorescence (raceme): Individuals produce a single flowering stalk, which appears in a few weeks before flowering, is narrow, but may reach 0.4-2.5 metres in height. It is composed of 100 to 350 sticky short branches, each terminating in a single head (or capitulum), with 50 to 220 disk-flower. The inflorescence stalk, the bracts that subtend the pedicels, and the involucre bracts are all covered with sticky glandular hairs that emit a faint sweet odour.
Blooming season (in habitat): August and September.
Fruits (achenes): Each achene, or dry fruit, contains a single seed.

Notes: The silversword alliance is a group of about 50 species of plants belonging to three genera endemic to the Hawaiian islands and most closely related to California tarweeds (genus Raillardiopsis) . They get their common name from the visually impressive silversword, Argyroxiphium sandwicense. Silverswords are members of the sunflower family (Asteraceae) and represent one of the world's most spectacular examples of adaptive radiation on islands. All them are thought to have evolved from a now-extinct ancestor about 5 million or 6 million years ago. They populate a variety of habitats, show a diverse range of leaf and flower morphologies, and grow as shrubs, trees, climbing vines, or herbaceous mats. 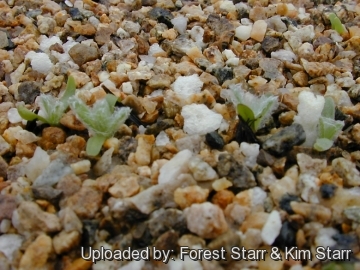 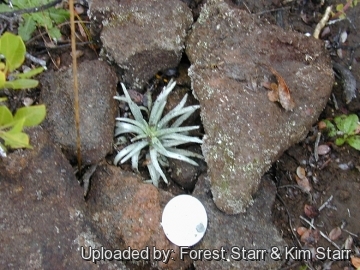 Cultivation and Propagation: Sow the achenes (seeds) on the surface of an open very draining medium ( 3:1 (v:v) mixture of perlite to vermiculite) and cover them with a thin layer of grit (3 to 6 mm diameter gravel size). The grit serves as a mulch to prevent the achenes from being disturbed by overhead watering. Transplant the young seedlings, typically before they reach 2 to 3 cm in height, into individual 7.6-cm diameter, pots. The medium differs from that in the germination pans, consisting of a 3:1 (v:v) mixture of black cinder to peat seedling mix. Hand watered the seedlings every other day and fertilized twice monthly with a foliar fertilizer (N-P-K diet including all micro nutrients and trace elements). Treat the seedlings fungicides, both to reduce fungal contamination and to minimize the riskt hat resistant fungal strains will develop. Seedlings are typically grown for 6 to 9 months prior to outplanting, at which time they have reached about 7 to 10 cm in height.