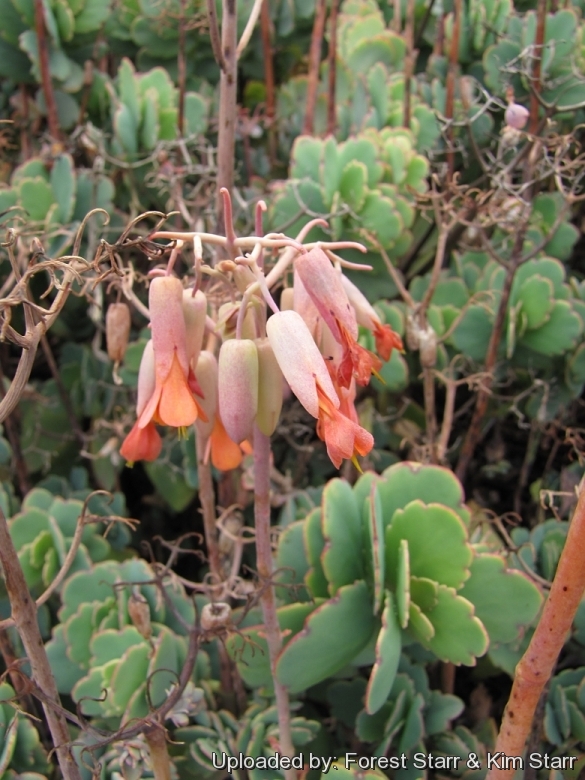 Origin and Habitat: Bryophyllum fedtschenkoi is is native to central-southern Madagascar.
Habitat and ecology: It grows in open ground at about 1.000 metres of altitude in semi-desert areas. It is widely sold as a house or garden plant that has established itself in the wild in some southern parts of the United States of America and perhaps South America too.

Description: Kalanchoe fedtschenkoi (Bryophyllum fedtschenkoi) also called 'South American Air Plant' or 'Lavender Scallops' is cultivated in the tropics and as a house plant in the temperate regions. The leaves are coloured metallic green and may turn pink or red under strong sunlight or drought conditions. The purple or reddish brown flowers are bell shaped and hang in loose clusters from upright stems in the winter.
Habit: It is a low-growing, untidy, erect to spreading ramified, perennial succulent herb. It is frost-tender, polycarpic and grows to about 60(-80) cm tall and half as wide.
Stems: Non flowering stems round, terete, succulent, 25–30 (or more) cm tall, smooth and lax with visible leaf scars, suberect often bending to touch the ground where they produce roots and a new plant, by the time of blossoming the branch curves upwards rising up to about 40 cm. The flowering branch withers once the fructification is completed, but produces at the base one or two lateral prostrate sterile branches, 8-40 cm long that take root wherever they lie on the ground, also through the emission of robust and rigid aerial roots, which at the end will produce in their turn a flowering branch; in this way, with the time, the plant may remarkably expand.
Leaves: Opposite, evenly spaced, simple, thick and fleshy, glabrous (hairless) oval or obovate (2-)3-5(-10) cm long and 1-3(-8) cm broad , tapering towards the base, waxy, bluish-green or lavender-grey glaucous or not, the margins crenate throughout or apically with 2-8 conspicuous indentation (teeth) often pink or red, apex obtuse. Petiole terete, (often turned obliquely), 1–6 mm long. Bulbils borne mostly in notches of leaf margins on damaged or fallen leaves.
Inflorescences (Cymes): Terminal corymbiform 15-30 cm tall, to 15 cm in diameter often multi-layered in good conditions, branches to 5 cm long carrying numerous and drooping flowers. Pedicels 5–15 mm long.
Flowers: 2.5-3 cm long tubular-campanulate, nodding, with a short green-yellow violet-flecked calyx (10-)15-18(-20) mm long edged with delta-shaped segments 4–7 mm long, the calyx is shorter than the tubular corolla and inflated. The corolla is an orange/coral/apricot colour formed by a 18-25 mm long tube contracted basally, and four obovate, lobes.5–8 mm long, apex obtuse to rounded.
Fruits: 4 clustered follicles containing numerous tiny seeds.
Phenology: It flowers in winter-spring.
Chromosome number: 2n = 34

Subspecies, varieties, forms and cultivars of plants belonging to the Kalanchoe fedtschenkoi goup 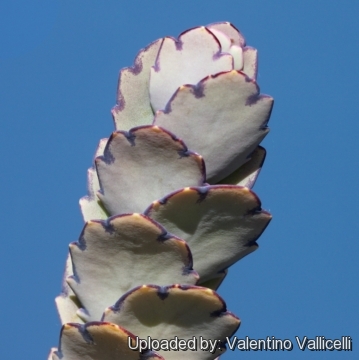 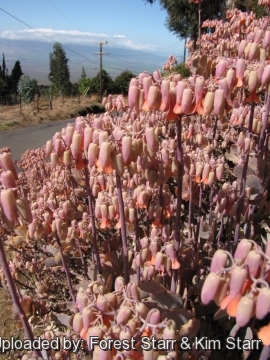 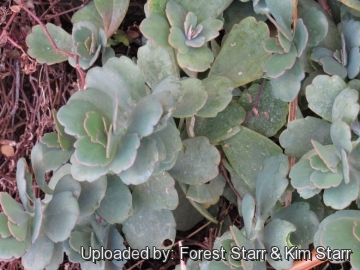 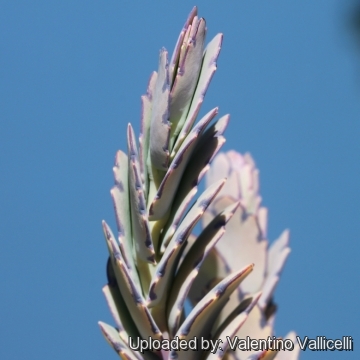 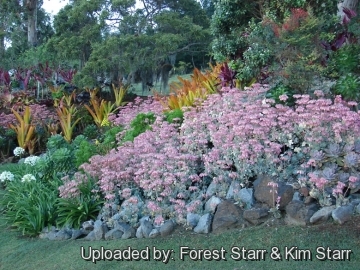 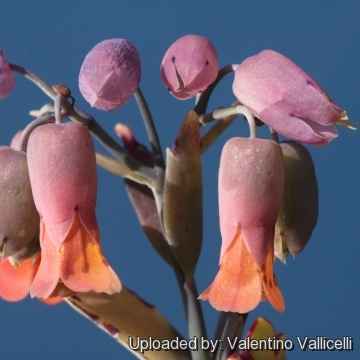 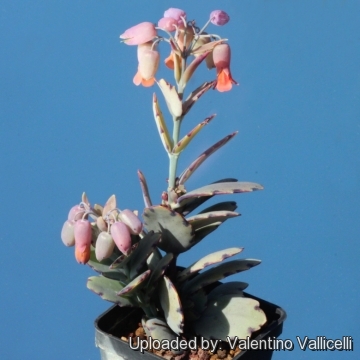 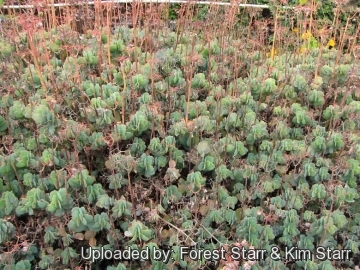 Cultivation and Propagation: The South American air plants (Kalanchoe fedtschenkoi) is very easy to culture. Architecturally intriguing, these rubbery, extremely handsome plant have become quite popular as an addition to summertime urns as accent plants in recent years. If planted directly in a garden bed, they can easily reach 40 cm and produce large heads of blossoms. It also is used in cactus/succulent or rock gardens. Growing this kalanchoe in a container or pot restricts their growth They are absolutely gorgeous as a cut flower in a tall stemmed green vase. Note that South American air plants have a tendency to spread and leaves that break off can start new plants in adjacent pots.
Potting mix: They thrive in nutrient poor soils, possibly acidic or neutral, consisting of equal parts of loam and sand, with pumice or lava grit added to ensure good drainage.
Exposure: Mature plants do best in full sun to partial shade. Indoors, it does best in bright light, but not direct sun through a window.
Watering: It needs moderate watering in autumn and spring while in summer it should be watered thoroughly and allowed to dry before watering again. In winter give only occasional watering (only when the plant starts shrivelling), but it will generally grow even in winter if given water. These plants will survive on neglect. Over-watering is the most common cause of plant failure. It can resist also to long drought periods
Frost resistance: The plant can be cultivated in open air only in the zones with tropical, subtropical and, marginally, warm temperate climate and it is hardy to -2° C for short periods but cannot tolerate hard freezes. USDA Zones 9B - 12.
Maintenance: Be careful with this species in outdoor culture, once it gets into a planting bed it is difficult to get rid of it, a few tiny plantlets seem to survive any attempt to weeding them out every time, and then they reproduce again.
Pest and diseases: The plant is subject to attacks of aphids and scale insects, and for this reason is to be periodically controlled in order to effect a quick intervention if necessary.
Propagation: It reproduces by seed, cutting, easily also by leaf, division or by means of the plantlets which at times grow up at the base of the petiole. Even a single leaf stuck into the soil or potting medium will take root! It grows easily roots at the end of a leaf stalk which has fallen onto ground. New plants are ready within months.
Warning: Parts of Kalanchoe fedtschenkoi are poisonous if ingested. All members of Kalanchoe are toxic for livestock, birds and small animal, due to the presence of cardio-active glucosides. Based on North American studies using chickens, Kalanchoe fedtschenkoi, Kalanchoe daigremontiana, and Kalanchoe delagonensis were the most toxic; the toxic dose was 8–12g /kg b.w. (Williams and Smith 1984).