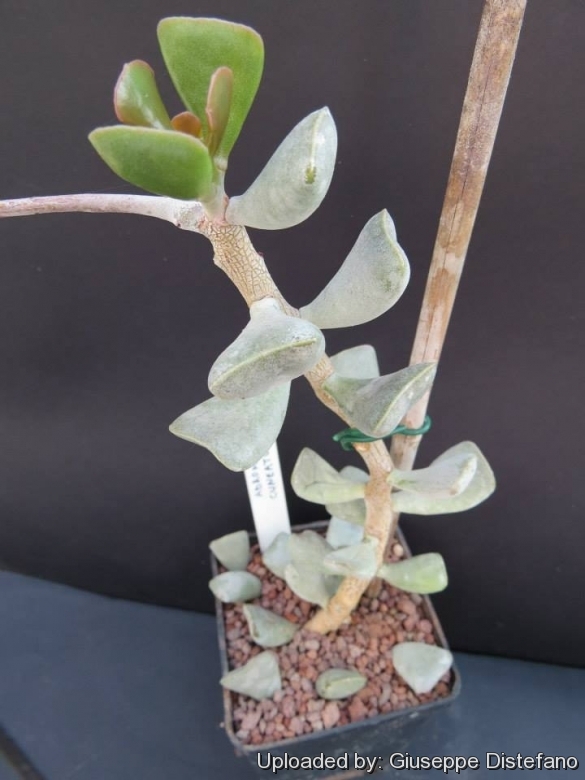 Origin and Habitat: Adromischus triflorus is the most common species in the Little Karoo and adjoining areas (From south-western Great Karoo and Little Karoo from near Worcester to Willowmore and Mossel Bay), South-Africa.
Altitude: 50 - 1800 metres above sea level.
Habitat and ecology: It is locally common on gravelly lower slopes or associated with rock outcrops. The plant grows in shade or shows some hardship from full sun.

Description: Adromischus triflorus is an exquisite dwarf perennial succulent plant forming a clusters with decumbent stems to 20 cm long. The shape and size of the leaves of this species are very variable and a number of local forms can be recognized. Often the leaves have reddish speckles that tend to become more intense in bright light; however, sometimes the leaves are devoid of spots. Flowers are greenish on the outside and white or pink inside the petals. Flowering occurs in summer.
Distinguishing characteristics: It is easily distinguished from all other species by the curved apices of the buds.
Roots: Fibrous.
Stems: Stemlets decumbent or prostrate 8-10(-20) cm long, little branched from the base.
Leaves: Leaves variable, erectly spreading, decussate, oblanceolate, obovate-spatulate, to obtriangular, rarely oblanceolate-rhombic, 30-50(-70) mm long, (10-)15-25 mm wide, longer than broad, cuneate to shortly petiolate, mostly truncate, rarely obtuse, usually convex on both sides, thicker in the lower part, horny margin in upper half, silvery grey, grey-green to greyish brown, glaucous, with tiny waxy dots, often (but not always) with red splotches mostly on the upper leaf.
Inflorescence (thyrse): (18-)25-35 cm tall, with l-3(-5)-flowered cymes, grey-green. Pedicels (l-)2-4(-6) mm long.
Flowers: Buds terete and curved at the apex, spreading. Calyx 1,5-2 mm long, grey-green. Corolla tube cylindrical 8-10 mm, yellowish-green, corolla lobes lanceolate-triangular, 3-5 mm long, white or pink with purple margins, and with club-shaped trichomes mainly towards throat Anthers included. Squamae square to oblong-ovate, 0,9-1,1 x 0,7-0,9 mm, emarginate, broadest at about the midle or below.
Flowering period (in habitat): (November) December, January.
Similar species: It can be easily confused with Adromischus liebenbergii which has similar leaves and occurs in the same area, but has different flowers. It is also confused with Adromischus maculatus which is a very similar, but larger species found on the higher slopes on which the horny leaf rim runs all around the margin to the base. In cultivation it is frequently found labelled as “Adromischus tuncatum” an old unsubscribed horticultural name that does not exist as a species.

Cultivation and Propagation: Adromischus triflorus is a fairly easy succulent to grow and one of the easier Adromischus species.
Growth rate: Adromischus triflorus is a popular, fast growing species.
Soil: It prefer well-drained soil.
Repotting: Repot every other years. All species of this genus are happy in small pots.
Exposure: It grows best in a partially shaded position. It got sunburned if exposed to midday sun.
Hardiness: Require a minimum temperature 5°C (But hardy down to -7°C for short periods), with good drainage and dryness in winter to resist the cold.
Watering: It takes more water than cacti, but let the soil dry between soaking, in the wild, it receives rain mostly in spring and fall. Must have very dry atmosphere. Water less in winter but do not allow it to shrivel.
Pest & disease: It is vulnerable to mealybugs and rarely scale. It is prone to rotting from the tuberous base or from dried inflorescences. It is also very attractive to aphids. .
Maintenance: As the plant matures, the centre becomes bare. When it does, restart it from side cuttings and throw away the central part.
Propagation: Adromischus seeds are very small and seed propagation is rarely used. It is easily propagated by leaf cuttings. Twist off a leaf and permit it to dry out a couple of days, lay it on the soil and insert the stem end partially into the soil. The original leaf should not be removed until it has dried up. Try to keep the leaf somewhat upright so that the roots are able to grow downward. If grown in a container, bottom watering by immersing the container is recommended.