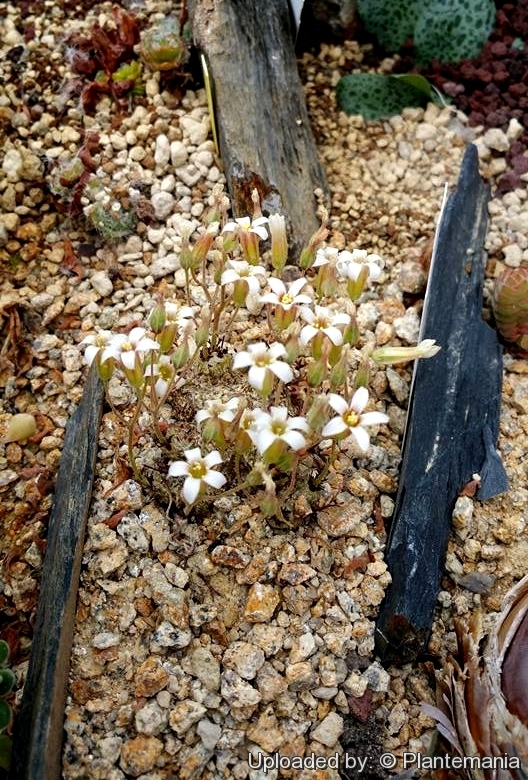 Origin and Habitat: Tylecodon longipes is a range-restricted, endemic species known from one site Spitskloof near Lekkersing (Northern Cape). South Africa.
Altitude range: 400–800 metres above sea level.
Habitat and ecology: Succulent Karoo. Tylecodon longipes is a cremnophyte plant that grows on quartzitic sandstone cliffs. The plants occur in crevices and on ledges on eastern and southern aspects. They are slow-growing, long-lived perennials, typical of cremnophilous succulent plants, and will fill crevices by active growth, forming dense, tight mats (vegetative spread), an efficient vegetative backup for survival in the harsh cliff environment. The temperature are moderate to high in summer and mild to warm in winter (frost absent), but regularly lowered by fog from the Atlantic Ocean. The average daily maximum temperature is about 18°C and the average daily minimum for the region about 10°C. Rainfall mainly in winter, about 50–75 mm per annum. It grows associated with several other succulent cremnophyte species such asì Adromischus caryophyllaceus, Crassula muscosa var. polypodacea, Haemanthus coccineus, Haworthia arachnoidea, Mitrophyllum clivorum, Tylecodon buchholzianus and Tylecodon racemosus.

Description: Tylecodon longipes is a very small, highly branched mat-forming succulent plant that grow to 3 cm high and up to 20 centimeters in diameter. Its branches are grey-green, with peeling bark, the leaves with a glandular hairy epidermis are crowded at the tip of stems. The first description was made in 1995 by Ernst Jacobus van Jaarsveld and Graham Williamson.
Derivation of specific name: longipes Latin 'longus', long; and Latin 'pes', foot, for the long petioles of the leaves.
Stems: Branches, numerous, short, upright (not become pendent), fleshy, fragile, without armament or camouflage, up to 2 in diameter with a silvery-grey peeling bark, which breaks up showing the green tissue underneath. They are crowded and spread out and become.
Roots: Tuberous.
Leaves: One to four crowded at the apex of each shoot, summer-deciduous, spreading, lanceolate, broadly egg-shaped or spatulate, rarely also 3-lobed, 1.5 to 3.5 cm long and 1 to 2 cm wide. Sometimes somewhat irregular in shape, wedge-shaped at the base and blunt at the the tip. The blade is grey-green covered with glandular hairs often somewhat channelled toward the base (indicative of adaptation to the regular fog from the Atlantic Ocean) and has a short petiole up to 5 mm long. Bract-like leaves, linear-acute, subulate, 1 mm long, drying soon.
Inflorescence: Up to 3 cm high thyrses with 1 to 3 monochasia each. Peduncle 1 to 2 cm long, covered with glandular hair.
Flower: The single flowers stand upright on a 7 mm long pedicel. The triangular sepals become up to 2 mm long and up to 1 mm wide. The tubular corolla is 15 millimeters long. The cylindrical to funnel shaped tube is greenish white and the elongated lobes are 4 to 6 millimeters long and 2 millimeters wide. The stamens protruding from the tube become 10 mm long. The pale green, transverse squamae become 0.7 mm in size.
Blooming season: Flowering in midsummer (in habitat January–February).
Related species: T. longipes is similar to Tylecodon decipiens but the latter has thinner and longer branches with stemless leaves.
Fruits (follicles). Dehiscent, with seeds spontaneously released and dispersed by wind.
Seed: Minute (ideal for establishment in crevices).

Cultivation and Propagation: Tylecodon longipes is not particularly difficult to grow using a well drained, cactus compost and exposed to bright light. Best grown in succulent karoo gardens, in rockeries or containers. Outside its habitat, it is best suited to a greenhouse, grown under controlled conditions. Repot every 2/3 years using the above compost with added slow release fertilizer. This species stay compact.
Watering: It is a winter grower, dormant in the summer. In the growing season water when the roots are almost dry, prefer little or no water in summer, depending on size.
Hardiness: Winter minimum temperature is 5ºC but better at 8ºC. The leaves easily drop off in cool conditions.
Propagation: Fairly easy to propagate from cuttings in late Autumn.