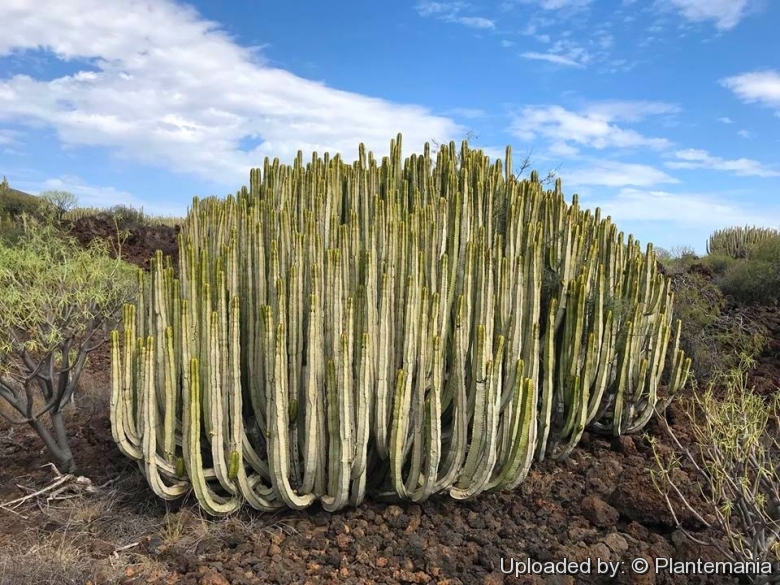 Origin and Habitat: Euphorbia canariensis is endemic to canary islands.
Habitat: This species grows natively in the arid and humid environment of the narrow coastal belt, from sea level to 1100 metres. It occurs in dry lava formations on the barren shores and mainly on the south facing mountain slopes on all islands. It is one of the most abundant plants on the sea-cliffs.

Description: Euphorbia canariensis is a small succulent shrub, 1 to 3(-4) m high. It clumps profusely from the base, one trunk may produce more than150 branches as thick as a man's arm.
Stems: Fleshy, stout, highly succulent, columnar, upright growing, cactus-like. They are deep green to reddish, 4 (rarely 5 or 6) angled up to 8 cm in diameter slightly spiralled. The surfaces, which are from 2 to 5 cm broad, are plain with a clean and smooth epidermis. The edges are obtuse and of a brown colour. The lateral branches forms an angle at their base, but are straight in the rest of their growth.
Spines: This plant is furnished of dark shining spines in pair. Perfectly regular, straight to cow-horn shaped, spreading laterally in rows along the four corners of the columns.
Flowers: Dark red to reddish-green in monoecious heads, surrounded by an involucrum consisting of 1 leaf with 5 division, which have externally 5 glands alternating with them. Males naked monoandrous, articulated with their pedicel surrounding the female, which is in the centre. Females naked solitary. Ovarium stalked. Stigma three forked.
Fruit: Maroon red on adult plants. The fruits hang out of the involucrum and each contain one suspended seed.
Remarks: It’s one of the more poisonous spurges. The latex which is very bitter and acrid contains diterpenes and is considered highly toxic.

Subspecies, varieties, forms and cultivars of plants belonging to the Euphorbia canariensis group 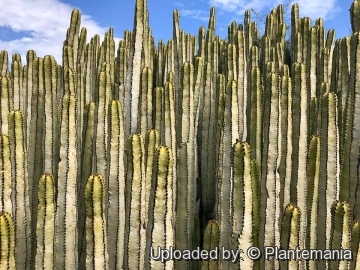 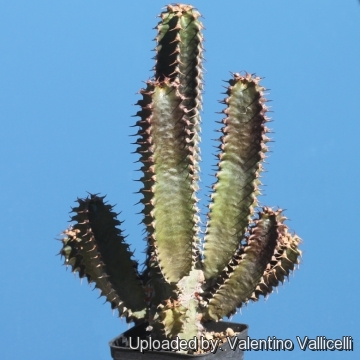 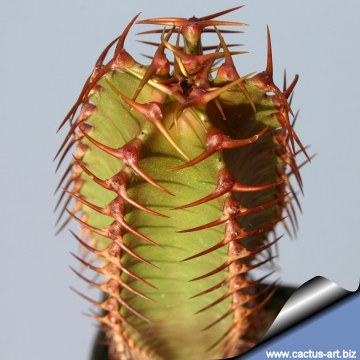 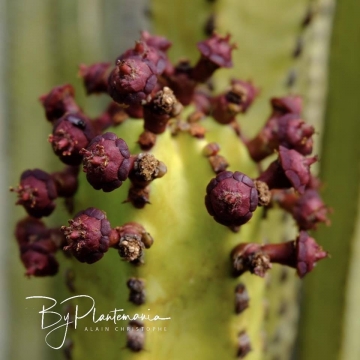 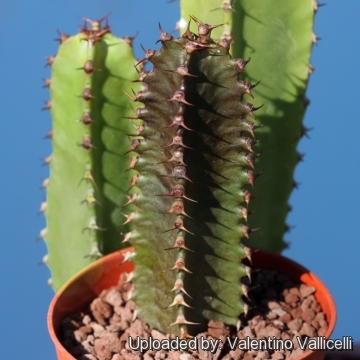 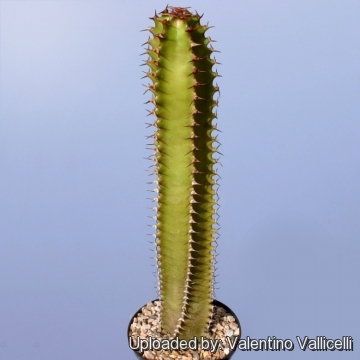 - This plant is furnished of dark shining spines in pair. Perfectly regular, straight to cow-horn shaped, spreading laterally in rows along the four corners of the columns, and are fairly short- easy to avoid with care, or gloves. Photo by: Valentino Vallicelli 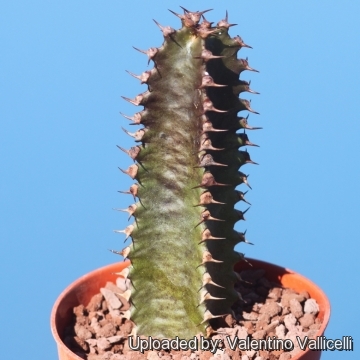 Cultivation and Propagation: It is an easy species to grow that is suited for any well drained soil in full sun.
Growing rate: It is a moderately fast grower, and will quickly become large landscape masterpieces in just 3-5 years. If plant becomes very red, this is a sign that the roots have not developed properly. It is a relatively fast growing and long lived plant and once established, it will be content in its position and with its soil for years.
Soil: Give the plant an airy growing medium which mainly consists of non organic material such us clay, pumice, lava grit, and only a little peat or leaf-mould.
Fertilization: Need a perfect fertilizer diet in summer. Use preferably a cacti and succulents fertilizer with high potassium content including all micro nutrients and trace elements or slow release fertilizer.
Exposure: It can tolerate moderate shade, and a plant that has been growing in shade should be slowly hardened off before placing it in full sun as the plant will be severely scorched if moved too suddenly from shade into sun.
Watering: Water regularly during the active growing season. No water should ever be allowed to stand around the roots. Keep almost completely dry in winter. However this spurge will tolerate dryness and can even thrives in poor, dry soils, but do better when grown in nutrient-rich soils with regular watering.
Wind tolerance: Only downside is from strong winds, the columns often smash into each other, causing permanent scarring... best to plant in such a location where winds are not a big issue.
Aerosol salt tolerance: It is salt tolerant.
Hardiness: Some cold tolerance. This spurge has tolerated temperatures down to –6ºC and even a little snow. However it can be difficult to get it to look its best without a good amount of heat and sun and so it is only really suited to the tropics (USDA Zones 9-12)
Rot: Rot it is only a minor problem with Euphorbias if the plants are watered and “aired” correctly. If they are not, fungicides won't help all that much.
Traditional uses: It is traditionally used in the canary island for fuel after it is dried. (a big plant may provide enough wood for one person for all winter.
Other uses: This species is also widely used in horticulture as a strong long lasting grafting stock for rare slow growing, sensitive species of Euphorbia.
Remarks: Few people are aware of just how large this succulent can get, and one often sees it planted in places where its going to cause real problems later on.
Warning: As with all other Euphorbias when a plant get damaged it exudes a thick white milky sap known as latex. This latex is poisonous, and may irritate skin. Pay extreme attention not to get any in your eyes or mouth.
Cultivated plants must be handled carefully.
Propagation: The plant can be reproduced by seeds or cuttings (It branches enthusiastically, and offsets are readily available). If you remove an offset, remember to let it dry for some days, letting the wound heal (cuttings planted too soon easily rot before they can grow roots). Lay it on the soil and insert the stem end partially into the substrate. Try to keep the cutting somewhat upright so that the roots are able to grow downward. It is better to wash the cut to remove the latex.