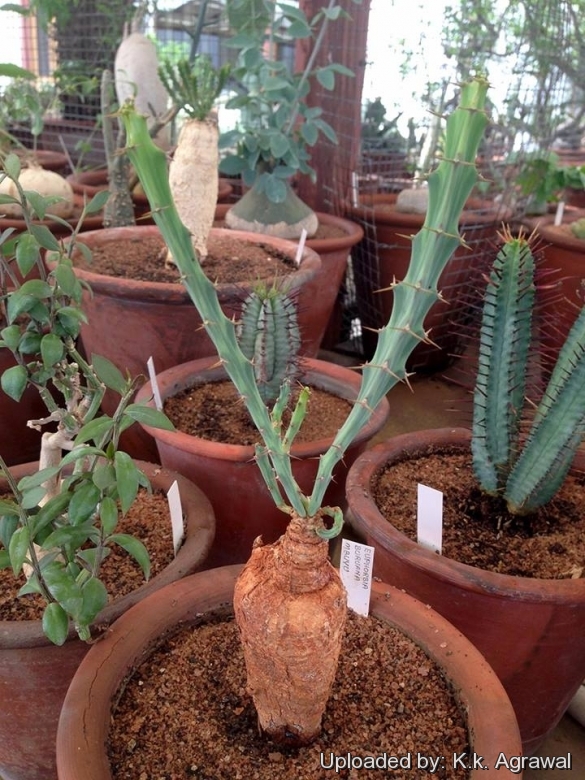 Description: Euphorbia buruana is a perennial succulent spiny shrublets with a large tuberous pseudo caudex, i.e., "fat root" that produces a tuft of three-winged succulent branches variegated with attractive decurrent streaks of yellowish-green in a pattern reminiscent of marble giving the stems a stretched appearance. It is monoecious having both male (center portion) and female (sides) parts on the same cyathia.
Main stem (rootstock): Partly buried in the ground, globe-shaped merging with the fleshy tap root, up to 10 cm in diameter. From the central growing point, the rootstock produces numerous crowded branches that twist over each other to form a rather lumpy hemispheric cushion. In cultivation, the tuberous root system may be exposed as a caudex.
Branches: Weakly erect to approx 30 cm high, or often semi-prostrate to 60 cm long, 2.5-4 cm in diameter at the thickest part, with the lower part gradually thickening upwards to or above the middle, and the upper part with 2–3 narrow neck-like constrictions between 2–3 dilated irregularly orbicular segments not much longer than broad, 3(-4)-angled, glabrous simple or occasionally rebranched. Angles wing-like, sometimes wavy, sinuate-toothed.
Leaves: Greatly reduced, scale-like, deltoid, ca 1.5 x 1.5 mm and deciduous.
Spines: Unequal, (1-)4-16(-20) mm long with the shortest at the constrictions, in pairs 8-16 mm apart, widely diverging, brownish-grey, on horny shields 1-2 mm. wide, extending above the spines to the flowering-eye and also shortly below them on the teeth of the angles, but not forming a horny border to the base of the teeth. Flowering-eyes 3-6 mm distant from the base of the spines. Prickles vestigial. Flowering eye flanked by a pair of secondary spines 0.5-1.5 mm long.
Inflorescences (cymes): Solitary, 1-forked with peduncles and cyme-branches to 4 mm. long arranged in a vertical plane; bracts rounded, 2 x 3 mm.
Flowers (cyathia): 4 x 6 mm, with cup-shaped involucres, all parts yellow; glands transversely elliptic, 1.5 x 3.5 mm, just touching; lobes transversely elliptic, 15 x 2 mm.
Male flowers: Bracteoles laciniate. stamens ca. 5 mm long.
Female flower: Styles 3.5 mm. long, joined for 1.5 mm., apices thickened, distinctly bifid. Fruits (Capsules): Sessile, sharply 3-lobed, ca. 4 x 6 mm, green flushed with red along the sutures.
Seeds: Subglobose, 2.5 mm in diameter, buff, mottled, smooth. 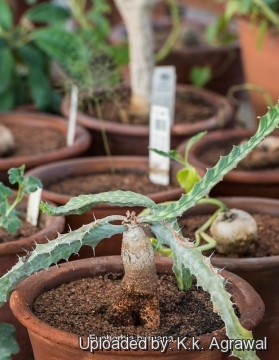 Euphorbia buruana Photo by: K.k. Agrawal
Send a photo of this plant.

Cultivation and Propagation: Euphorbia buruana is cultivated as an ornamental, and is a particular favourite of succulent plant enthusiasts. Cultivation of this plant is the same as that for the other tuberous varieties of Euphorbia, (e.g. Euphorbia stellata, Euphorbia decidua etc.). In cultivation, it makes a persistent specimen that develops an increasingly impressive caudex with age.
Growth rate: It is a slow growing species, but it it possible to increase the speed of growth to some extent by providing adequate amount of water, warmth, and fertilizer during the active growing season, but it’s susceptible to rotting if too wet and do not like a lot of water when they are on rest.
Soil and pots: It likes pots with generous drain holes, needs a very airy potting medium which mainly consists of non organic material such us clay, pumice, lava grit, and only a little peat or leaf-mould, seeing that the main trunk is planted with the majority of the roots below the caudex line. It's rare that it will use the upper third of its soil and often this area serves like a mulch or support for the stem.
Fertilization: Need a perfect fertilizer diet in summer. Use preferably a cacti and succulents fertilizer with high potassium content including all micro nutrients and trace elements or slow release fertilizer.
Exposure: This plant has an excellent heat tolerance, and need full sun to light shade exposures, it grows well even in full blasting sun, but can tolerate moderate shade, and a plant that has been growing in shade should be slowly hardened off before placing it in full sun as the plant will be severely scorched if moved too suddenly from shade into sun. The color of this plant is much more marked if grown in full sun.
Watering: Water regularly during the active growing season. No water should ever be allowed to stand around the roots. Keep almost completely dry in winter. However this spurge will tolerate dryness and can even thrives in poor, dry soils, but do better when grown in nutrient-rich soils with regular watering.
Hardiness: Some cold tolerance. This spurge has tolerated temperatures down to –6º C. However it can be difficult to get it to look its best without a good amount of heat and sun and so it is only really suited to the tropics (USDA Zones 9-12). It can be grown outdoors in frost-free climates.
Rot: Rot is only a minor problem with Euphorbias if the plants are watered and “aired” correctly. If they are not, fungicides won't help all that much.
Manteinance: Re-pot every two years and trim off the dead 'arms'.
Known hazards: The latex/sap is poisonous and can cause skin rash, itching and general discomfort, and they should be handled with caution, particularly when pruning.
Propagation: The plant can be reproduced by seeds or cuttings. The seedling is best left until it is larger as it will grow faster if the root is buried. The plant may be propagated by branch cuttings which will grow and flower. Usually cuttings will not form caudexes unless double cut. Once growth is strong, the top of the green shoot needs to be cut off again to force the plant to start a caudex. Some plant form a perfectly symmetrical caudex when grown from seed, but form distorted (but often more interesting) caudexes when grown from cuttings. If you remove an offset, remember to let it dry for some days, letting the wound heal (cuttings planted too soon easily rot before they can grow roots). Lay it on the soil and insert the stem end partially into the substrate. Try to keep the cutting somewhat upright so that the roots are able to grow downward. It is better to wash the cut to remove the latex.