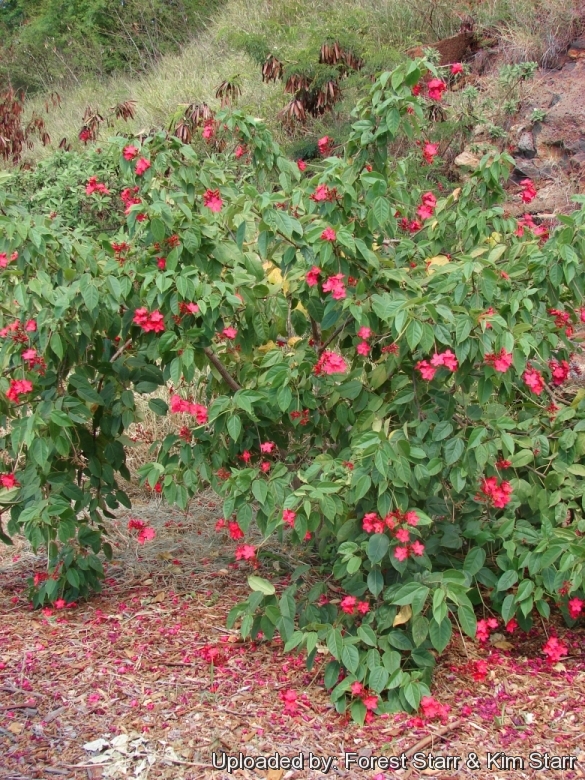 Origin and Habitat: Jatropha integerrima is native to the West Indies, Cuba and Hispaniola (Dominican Republic and Haiti), but widely grown for ornament in many tropical and subtropical countries and often persistent after cultivation.
Habitat and ecology: It grows in sandy and semi-arid areas, close to swampy zones and in disturbed soils.

Description: The peregrina (Jatropha integerrima) is an ornamental evergreen, rounded or narrow domed succulent shrub or small tree that can grow 3-4.5 m tall with a spread 2.5-3 or so with age in frost-free climates, although in cultivation it is usually smaller. The leaves are glossy-green and vary in shape from lobed to oval. This species produces beautiful clusters of scarlet flowers with bright yellow stamens year-round. It is related to Jatropha curcas that is grown commercially to produce oil used in biodiesel fuel.
Trunk and Branches: Routinely with, multiple trunks resistant to breakage with thin bark that droop as the tree grows, but can be trained to grow with a single trunk. The older stems are relatively thick and either somewhat succulent or softly woody. These older stems contain a watery or soapy sap. The current year twig are herbaceous and purplish brown in colour. The bark when dry is strongly aromatic, hence its other common name Spicy jatropha.
Leaves: Alternate, 5-15 cm long and 3-8 cm broad, , bronze when young with a brownish underside, becoming a dark glossy green colour as they age velvety on upper surface and flecked with purple below, extremely variable in shape, mostly quite entire elliptic or oval, but some with here and there an angular process, or they may have three sharp pointed lobes. Petiole long.
Flowers: Unisexual (masculine or feminine) borne in a multi-flowered terminal cymose inflorescence on a 5-10 cm long peduncle. Star shaped, five-petaled, about 2.5-3cm across bright scarlet, vermilion or coral-red with yellow stamens.
Blooming season: This species flowers throughout the year where adequate moisture and temperature is available. The inflorescence continues to branch and flower for an extended period.
Fruit (capsules): Greenish red, sub-globular, 3-locular, about 1-1,3 cm in diameter and length, dehiscent (spontaneously splitting open when ripe).
Seeds: Ovoid, about 8 mm long, pale brown with blackish dots. 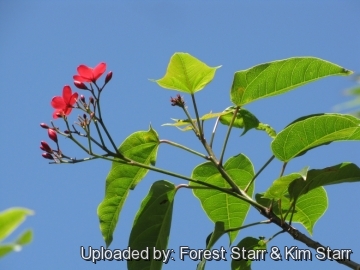 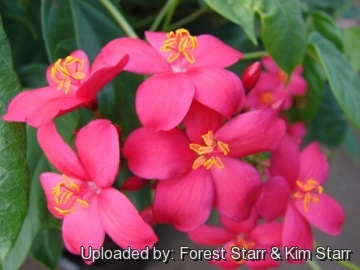 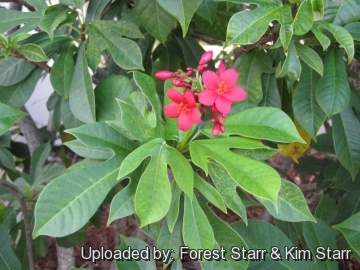 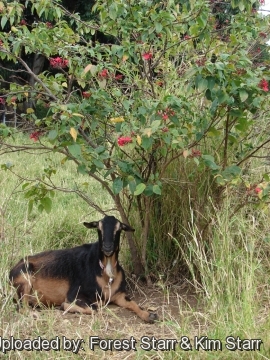 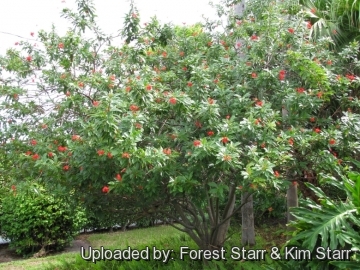 Cultivation and Propagation: The peregrina or Spicy jatropha (Jatropha integerrima) is an adaptable species that does best in drier tropical areas and is tolerant of poor and dry soils. This plant develops in a fashion similar to a sprawling shrub and is tolerant of heat and drought and cultivation is uncomplicated. Peregrina is a spectacular shrub in bloom, which is most of the year. Use it as an accent or in a mixed shrub border. Peregrina often grows shrub like with several slender trunks, but it can be pruned to a single trunk. Seeds are viable but not invasive.
Growth rate: They can grow fast.
Exposure: Full sun to partial shade.
Soil: The plant grows best on fertile and well-drained soils with good aeration. Root growth is reduced on heavy soils, but the plant can grow in wastelands and grows on almost any terrain, even on gravelly, sandy and saline soils. It can thrive in poor and stony soils. For pot culture a gritty, very free-draining compost is suitable, and clay pots help the plants to dry out between watering. Re-pot every 2-3 years. Mulch may be put underneath to reduce weeds.
Fertilization: Jatropha respond well to fertilizer. A balanced, slow-release general purpose fertilizer may be applied once or twice a year especially before new growth begins in spring.
Waterings: They like only a short winter's rest and should be kept almost completely dry during the winter months. A regular watering schedule should be followed which helps in deep extensive root system. If the soil is allowed to be dry for too long root loss could follow but equally the same result would occur if the plants are both wet and cold. From March onwards the plant will begin to grow and watering should be increased gradually until late May when the plant should be in full growth. Water regularly during the summer so long as the plant pot is allowed to drain and not sit in a tray of water. During hot weather you may need to water the plants more frequently so long as the plant is actively growing. From late September watering should be reduced to force the plant to go in to a state of semi dormancy, by October you should be back in to the winter watering regime. The shrub tends to become thin if it is watered too much.
Hardiness: Tender, protect from frost. Temperature spring to autumn: nocturnal at least 18°C and diurnal up to 38°C. Wintering: nocturnal 12°C and diurnal 20°C or more. USDA zone(s) 10-11. Peregrina is damaged by frost and is considered marginal in zones 9B and 10A, if damaged by a cold winter it will eventually start growing quickly once it emerges from the base. This plant does great potted and moved into the house or garage for the winter.
Aerosol salt tolerance: Peregrina is not very salt tolerant.
Pruning: Prune to remove dead branches and leaves for a cleaner appearance in the landscape. However if it's not pruned on a regular basis it will grow out of control. As a large bush it becomes top heavy with growth and flowers and barren of them at the bottom (very leggy looking). Repeatedly prunings also help to encourage new growth. The flowers only develop terminally (at the end of a stem), so a good ramification (plants presenting many branches) produces the greatest amount of flowers. Prune preferably in spring by one-third to keep growth compact, but as Peregrina blooms on the current year's growth it can be pruned at any time of the year. Easy to prune to desired shape and height. You may also remove the lower branches to convert into a small tree or used in espalier.
Pest and diseases: The use of pesticides is rarely necessary, due to the pesticidal and fungicidal properties of the plant but occasionally bothered by mites, scales, mealybugs and superficial leaf miner.
Uses: Small tree, foundation, shrub border, accent, specimen, butterfly and bird gardens. Peregrina makes a fine container plant on the patio or at poolside. Use showy peregrina to create a colorful focal point near patios and outdoor living areas.
Propagation: It is usually propagated from semi hard wood cuttings taken in spring or by seed.
Warning: All the parts of the plant are considered as poisonous to humans and animals especially the seeds. Seeds, fruit and sap contain toxalbumin, a toxin. Children may be attracted to the red berries if they are eaten, the toxalbumin in them can came depression of the central nervous system, gastroenteritis and bleeding. When a plant get damaged it exudes a thick white milky sap known as latex. This latex is particularly dangerous for the eyes, skin and mucous membranes. So pay extreme attention not to get any in your eyes or mouth. Cultivated plants must be handled carefully.