Origin and Habitat: Jatropha multifida is native to the West Indies and naturalizes in southern Florida, South-west Texas, Mexico and southwards to Brazil, but widely planted as an ornamental in Africa and in many tropical and subtropical countries and often persistent after cultivation.
Altitude range: Sea level to around 1400 meres.

Description: The coral plant (Jatropha multifida) is a glabrous, eglandular, succulent-type, evergreen or deciduous shrub or small tree, which grows 1.5 to 3 m tall, but occasionally as high as 5(-6) metres. It is cultivated in many tropical gardens for true beauty of its scarlet flowers and round strongly incised leaves. The flowers appear in bunches during the summer.
Stem: The older stems are relatively thick (up to 8 in diameter) and either somewhat succulent or softly woody with a smooth grey or brownish bark with raised lenticels, but green in the young new growth. Branchlets thick that exude a copious milky or clear caustic, poisonous sap if cut or damaged.
Roots: Long and tuberose.
Leaves: Alternate, simple, deeply palmately-lobed, roundish in outline borne on long petioles near the tips of the branches. Blade 15-30 cm long and broad bright green above, glaucous beneath; petiole 10-20 cm long, subtended by a distinctive multifid (fringed) stipule to about 1.5-2 cm long, the segments setaceous. Lobes 7 to 12 long-acuminate and prominently veined; the larger of which may reach up to 20 cm in length and 9 cm in width, may also be toothed or dissected into narrow, pointed segments and confluent into a narrowly cordate basal disk; lateral nerves numerous. They are very similar to the leaves of some species of Manihot.
Flowers: Small, bright-red borne in a long-stalked dense corymbiform to subcapitate, flat-topped inflorescence up to 25 cm long arising from the top of the main stem and often held high above the foliage. Peduncle up to 22 cm long. Male and female in the same branched cluster, petals coral-red, sepals not petal-like. Flowers do not all open at once, so the cluster looks red for a considerable time.
Male flowers: pedicels up to 1 cm long, calyx 2 mm long; calyx lobes 1 mm long, ovate, rounded and fringed or entire at the apex, red. Petals 5 × 2 mm, oblong-oblanceolate, rounded, scarlet. Disk glands 5, free, rounded; Stamens 8, 4 mm long, filaments free, anthers 2 mm long sagittate at the base.
Female flowers: Solitary on the primary and secondary axes of the cyme. Sepals and petals as in the male, but about 1.5 times larger. Pedicels 2 mm long. Dsk 2.5 mm in diameter, flattened, 5-lobed, with lobes rounded-truncate. Ovary 3 × 2 mm, triangular to ellipsoid. Styles 2.5 mm long, united at the base, stigma's head 2-lobed.
blooming season: The plants blossom and fruit sporadically throughout the year.
Fruits (capsules): Bright yellow, consistently trilocular to pyriform 1.5-4 cm long and wide (2.5 × 2.8 cm when dried), narrowing at the base, truncate or depresse at the apex, the lobes slightly keeled smooth and green when young, turning yellow, and becoming almost black at maturity, slowly dehiscent to subdrupaceous; each capsule usually contains 3 seeds. Though these fruits have a sweet and pleasant taste, they are highly poisonous.
Seeds: Oval, approx. 17 × 15 × 13 mm buff, brown mottled, ecarunculate. 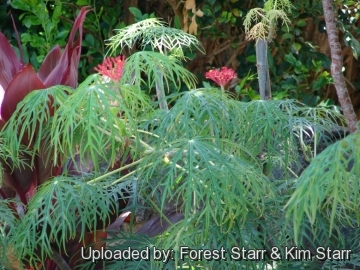 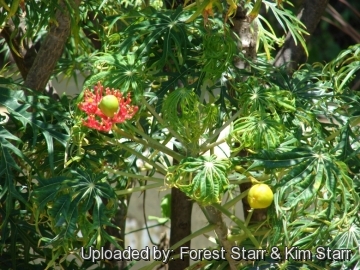 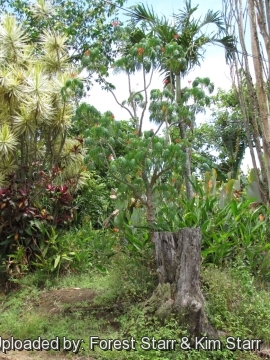 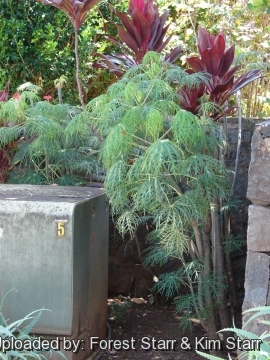 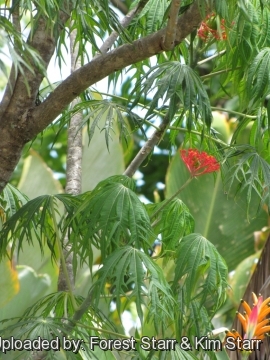