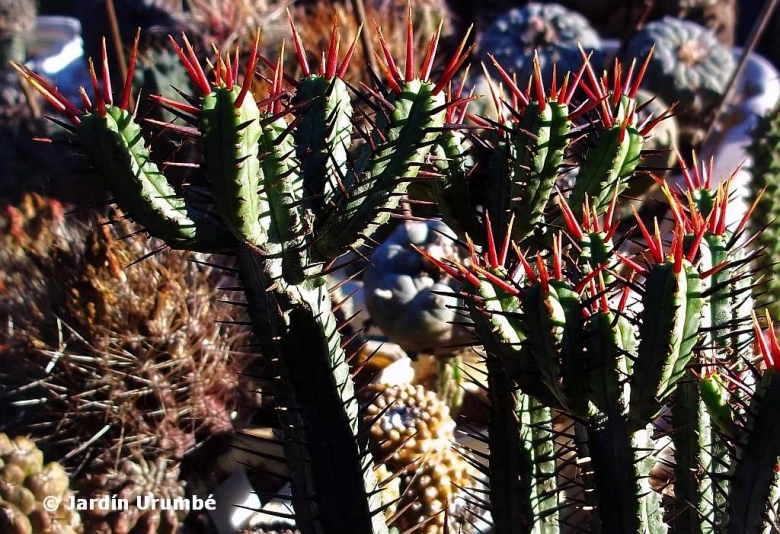 Euphorbia atrispina Photo by: Alexander Arzberger
These compact low growing shrublets can make nice specimens in just a few years. The black spines contrast nicely with the stems in some individuals.

Origin and Habitat: Euphorbia atrispina extends from the southern limits of the Great Karoo to the Little Karoo, Western Cape, South Africa.
Habitat and ecology: This species grows in fire-protected sites in north and south facing slopes and ridges and mostly comprising of Valley Thicket species. Succulents (Aloe speciosa, Sarcostemma viminale, etc.) are very abundant. Euphorbia atrispina, is poised to colonise the area vacated by succulent thicket on the background slopes should the climate become drier in the future.

Description: Euphorbia atrispina is a dioecious 'cushion' euphorbia, branching densely from the base. Apart from the fact that the species is dwarf (7-20 cm high), no important features distinguish it from its close allies, Euphorbia heptagona and Euphorbia enopla which have a larger, bushy habit. This three spiny shrubs are difficult, if not impossible, to distinguish. Euphorbia atrispina is really beautiful, easy to grow and look best in cultivation when young and goes on to produce large mounds with time.
Derivation of specific name: The name refers to its black spines which are typical although a green-spined variety has been recorded from the Montagu district.
Stems (branches): 6- to 9-angled, upright, about 20 mm thick and rounded, without prominent angles with shallow crowded tubercles
Spines (sterile peduncles): Solitary, stiff, 1-2 cm long, with a few minute bracts, at first red, then black and finally grey.
Flowers (Cyathia): Solitary on short, blackish peduncles (to 4 mm long). Cyathia about 2.5 mm in diameter. Nectar-glands elliptic, separate. Ovary sessile.

Subspecies, varieties, forms and cultivars of plants belonging to the Euphorbia atrispina group 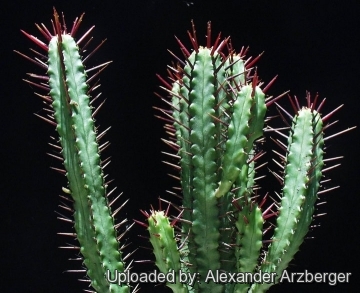 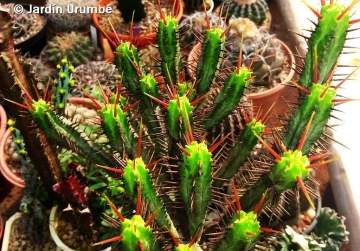 Cultivation and Propagation: Common and relatively easy to grow plant for pot culture. It grows well in a very draining mineral potting substrate, but it isn't picky about soil. The area where this plant is native receives rains both in winter and summer, so it can be watered moderately all year around (except in the coldest month of the winter, as it rot easily ,especially if over-wet). During the summer, they enjoy average feeding and watering. When dormant in winter, keep it totally dry at or around 4°C, even though it seems to tolerate light frosts well. Mature healthy plants are tough and can also be grown outside where frost is not too severe, but when left out it is more sensitive to frost. They do need a lot of light to keep their compact growth-form, but different clones vary in their tolerance of full sunshine. The plants that are not kept in full sun grow faster, but became untidy and may need support as they get larger, or branches fall off. But if grown in the protection of light shade, the thick purple spines of this low-growing clumping columnar plant have the best colour. Sometimes, in really hot full sun all day long, a plant will bleach out a bit. It soon grows into a large, many stemmed specimen, and it can fill a 30 cm bowl. It is also a prolific bloomer, and makes a spectacular specimen.
Propagation: It is propagated by cuttings or seeds. It branches enthusiastically, and offsets are readily available. If you remove an offset, remember to let it dry for a week or so, letting the wound heal (cuttings planted too soon easily rot before they can grow roots). It is better to wash the cut to remove the latex. The seed can be sown just under the surface in normal seedling trays in a sandy seed mix. Germination usually occurs within 1 - 3 weeks.
Warning: As with all other Euphorbias, when a plant get damaged it exudes a thick white milky sap known as latex. This latex is poisonous and may irritate skin. Pay extreme attention not to get any in your eyes or mouth.
Cultivated plants must be handled carefully.