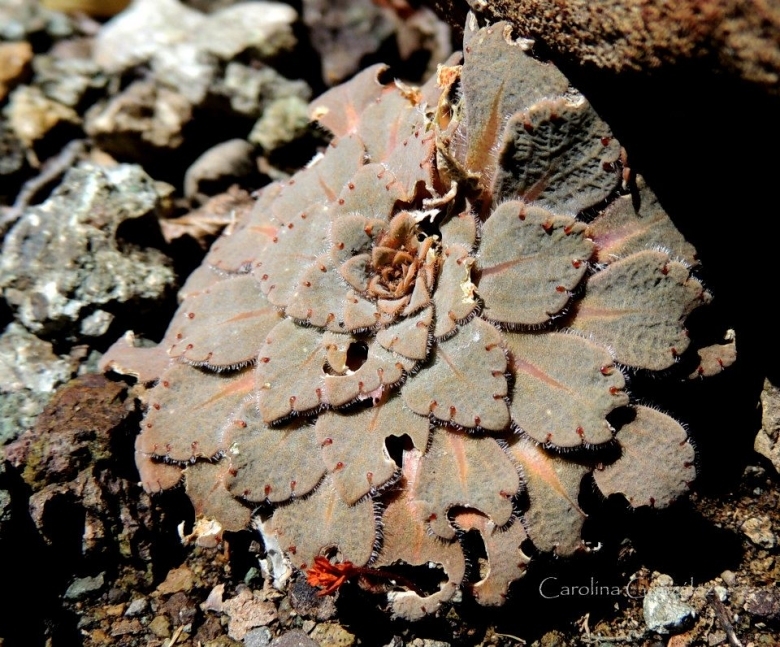 Origin and Habitat: Viola vulcanica is endemic to Chile and Argentina.
Habitat and ecology: This species grows fully exposed to the sun on flat dry areas or slopes facing north, often among loose pumice stones in volcanic ash, and also in sand or silty soils of steppe or steppe edge habitats. In these areas the drought may last 3-5 months and the precipitations (400-800 mm per annum) are concentrated in winter. It can be covered by snow for months (1-8 months). Together with some of its close relatives, this species is well adapted to blended in with the sand and stony volcanic ground where it grows. The colour of the leaves and of the sand is very similar, and it seems that this could be an adaptation to herbivores.

Description: Viola volcanica, (occasionally misspelled "vulcanica"), is a little stemless annual or short lived perennial herb, remarkable for its neat, dome shaped rosettes. The beautifully textured leaves are sandy-coloured with scalloped hairy margins. The flowers, barely emerging from the rosettes, are rather small white with violet veins, so this really is primarily a foliage plant as far as a gardener’s eye is concerned.
Rosette: Tight, dome shaped, up to 5 cm tall.
Root: Fusiform divided above.
Leaves: Shortly petiolate, densely tufted, ovate, spathulate-rhobic, obtuse, soft, semi-succulent, sand- to ochre-coloured often with violet tones and finely textured. Above somewhat reticulate and wrinkled. Below red glandular. Margin ciliate, serrated-pinnatifid. The thin hairs round the margins presumably help reduce transpiration by slowing down the movement of air around the plant, a very necessary adaptation to its windy environment. Stipules 3, dark, linear, intermediate ones bifid.
Inflorescences: Peduncles slender as long as petioles.
Flowers: Less than 18 mm in diameter, petals 5, white with violet veins toward the centre and a yellow throat leading from the lower petal, spur to 2 mm long.
Similar species: V. volcanica is closely related to {{Viola congesta} but has more pointed leaves. 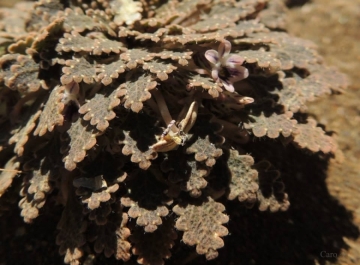 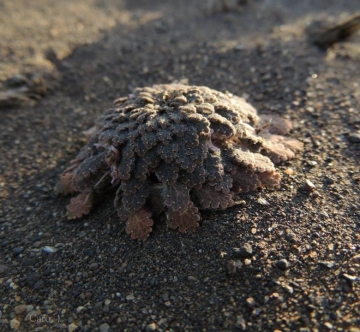 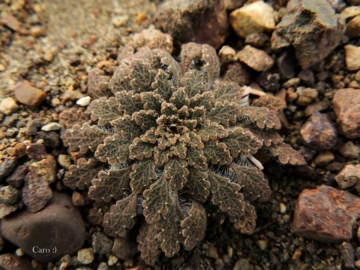 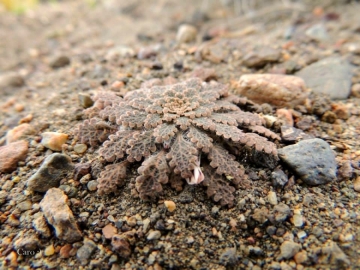 Cultivation and Propagation: These plants are often intractable in cultivation and often seemingly impossible to propagate. It is not easy to get seed of these plants.
Hardiness: USDA Hardiness Zone 7, even 6b. The plant tolerates low temperatures (-15° C even -20° C).