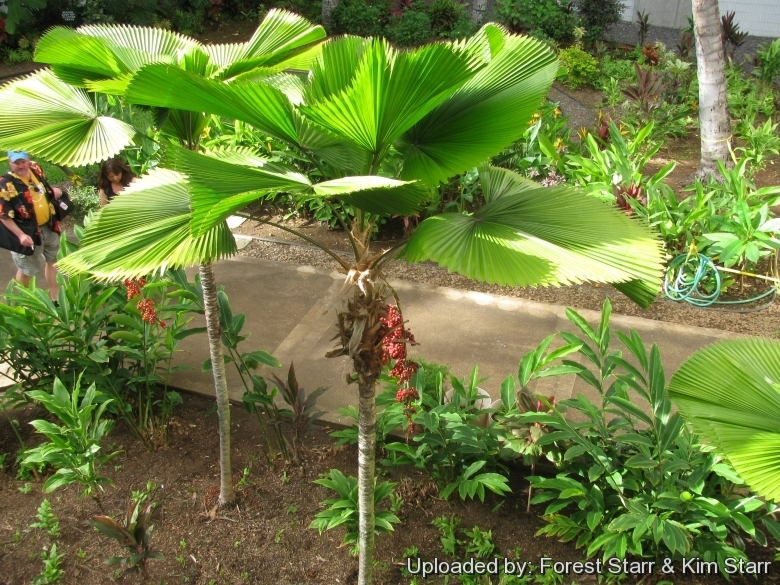 Description: Licuala grandis is a slow growing small palm It is an exotic-looking palm of interest to collectors and tropical plant enthusiast.
Trunk: Single, brown to grey-coloured, upright and slender that reach a mature height of only 2 or 3 meters, but usually less than 1,8 m tall and 10-12 cm in diameter, ridged with old leaf scars and traces of fibrous leaf sheaths.
Crown: Spread about 2,5 m wide or less.
Leaves (fronds): Costapalmate, attractively pleated fan-shaped to orbicular (forming an almost perfect circle) nearly entire, segment joined practically all the way except the edges that are notched, dark glossy green, held horizontally about 60-100 cm or more in diameter. Petioles 1 m long thin and spiny .
Fruits: red fruit.
Inflorescences: up to 2 m long, dangling arising at the the base of leaves, usually longer than the fronds. Flowers bisexual small whitish-yellow.
Blooming period: Will flower frequently.
Fruits: Several held on 50-90 cm long spikes, very decorative, 1-1.5 cm in diameter, roundish, berry-like, each containing a single seed, green that ripens to a bright red colour. 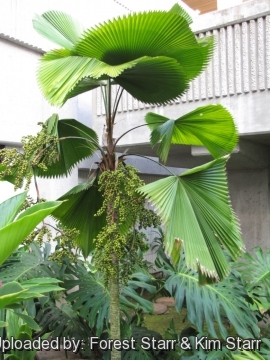 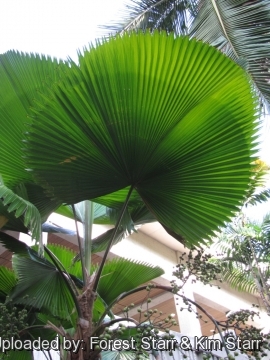 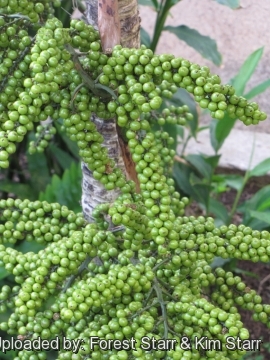 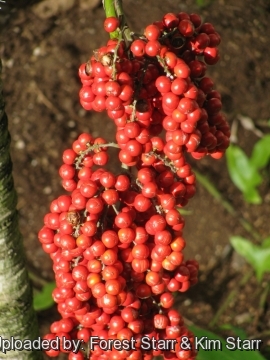 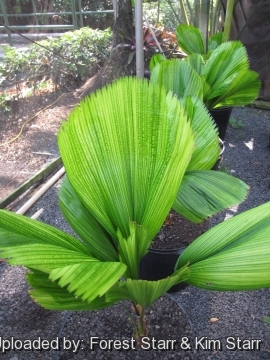 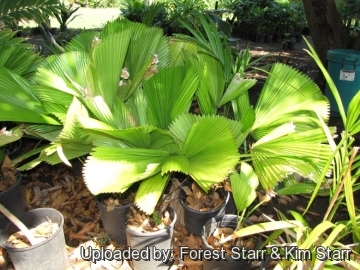 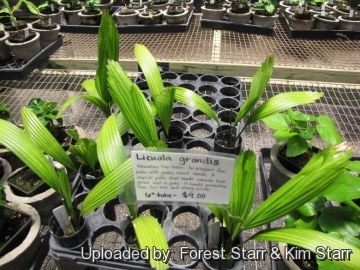 Cultivation and Propagation: Licuala grandis is an excellent relatively slow-growing palm very popular among tropical palm collectors adapt to different climates, from tropical to warm temperate. It is also one of the most elegant and durable indoor palms. It is perfect, both for container planting or grown on the ground, and ideal too for indoors or outdoors.
Soil requirements: It prefers fertile organic soils except those that are constantly soggy. However it is widely adaptable including those that are neutral, acidic, clayey and slightly alkaline, provided they are free-draining.
Watering: Licuala prefers very copious waterings and should be watered before the soil completely dries. Help soil conserving its humidity with heavy groundcover mulch , which affords a rich decaying organic base. Licuala roots are shallow, and spreading, so it loves to explore and insinuate themselves into this rich mulch, which must be constantly wet. Don't let sit in water. Indoor, potted Licuala should not be over-watered.
Light: Outside an eastern exposure, featuring filtered morning sun, is perfect for this palm but can stand full sun in the tropics (high constant atmospheric humidity), though the leaves may sometimes get scorched by direct sunlight. Young specimens need protection from direct sunlight and grow best in shady to partly shady locations. If home-grown, they look their best in bright diffuse light but tolerate low light levels. When growing as a patio palm, it would be a good idea to remember that they should not be grown in direct sun.
Fertilization: Need a perfect low-release fertilizer (e.g., 18-18-18) diet including all micro nutrients and trace elements.
Aerosol salt tolerance: Not tolerant.
Hardiness: They grow well in tropical and subtropical climates but will also grow in particular favourable Mediterranean frost free microclimates. (USDA hardiness zones 9b-11) , and mature, established specimens can tolerate temperatures down to -5 °C, but only for a few hours; normal temperatures should not go below 10°. (USDA Zones 9B – 11)
Wind hardiness: Avoid strong winds. Its fronds will shred badly if exposed to extended periods of heavy winds. It cannot tolerate at all sweltering heat and windy conditions, remember, this is an understory rainforest tree!
Maintenance: It will rarely need pruning only removal of browned-out fronds or leaves. Remove spent flowering spikes to avoid harbouring pests such as mealy bugs.
Propagation: By seeds that sprout slowly and erratically, with seedlings appearing as early as 2 months after planting and then sporadically over 1 year.
Use: It is grown in open air, in the sub tropical and warm-temperate zones, for the decoration of parks and gardens, in a partly shaded location when young, and regularly watered. But the most frequent utilization, since from the introduction in Europe, is as indoor plant, its elegance, since the very first years of age, the adaptability to conditions of scarce luminosity, and the absence of particular attentions, render it, still now, one of the most utilized palms, if not the most common, for the decoration of indoor spaces.
Traditiona uses: The large umbrella-size leaves of Licuala grandis are used for thatching.
Disease & Pests: Generally, it’s free of serious diseases and pests, protect against mealy bugs on matured fruits. Protect from frost.